What Is Mate Tea? This unique herbal infusion is popular in South America, and it’s the continent’s answer to tea and coffee. Do you know yerba mate tea? 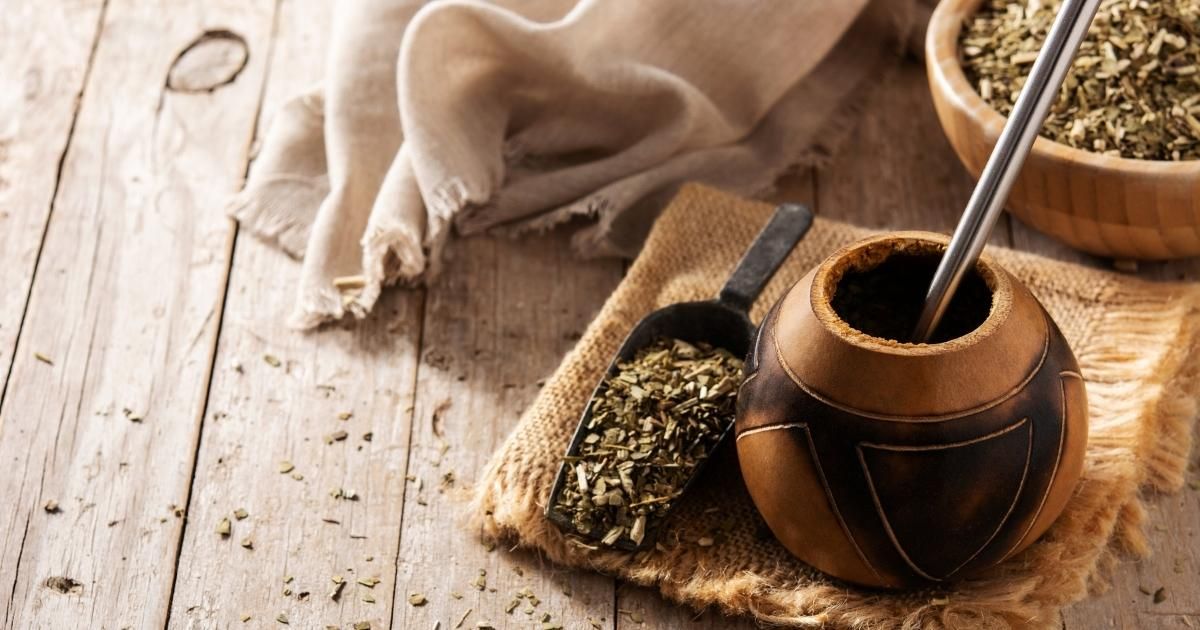 Yerba mate tea is a special infusion popular in South America, where it’s enjoyed during the day, just like people in other places drink coffee or tea. Still, yerba mate tea is much more exciting! There’s nothing like it elsewhere.

The question is, what is yerba mate tea? Where does it come from? What does mate tea taste like? Here’s all you need to know about the most famous South American herbal infusion. Are you ready to try it?

What is Mate Tea?

Every country in the world has its favorite drink. For some, it’s coffee, and for others, it’s tea. In South America, everyone prefers yerba mate tea. Yerba mate is more than a drink to quench your thirst; it’s part of society, as people gather around to enjoy mate along with long conversations and laughter. Mate is a tradition and a cultural experience.

Now, what is mate tea? Yerba mate is a plant species native to South America, mainly grown and enjoyed in Uruguay, Paraguay and Argentina. The plant has been around for ages, and Native Americans already enjoyed it before the European conquerors found their way into the continent. Of course, Europeans saw the deliciously bitter infusion as quite charming — it contains caffeine.

The all-natural energy drink can now be found worldwide, but it hasn’t been adopted by foreign cultures as much as coffee, chocolate or tea — yerba mate is still a local phenomenon.

Let’s talk about this wonderful herb, its properties, flavor and uses. Most importantly, let’s learn how to serve yerba mate tea to our friends and family. South American people do one thing very well, and that’s socializing. Mate tea has undoubtedly something to do with that.

Yerba mate is a natural herb consumed for its caffeine; it revitalizes its fans and gives them an energy boost. We can say the same about green tea, the caffeinated Asian herb that enjoys more popularity.

What’s the difference between yerba mate herbal tea and green tea? They have only a few things in common, but they’re enjoyed similarly! Here’s what you need to know about both herbs and the infusions made with them.

Yerba mate is a plant species of the Holly genus, and tea is an evergreen shrub of the species Camellia sinensis. Mate is native to South America and tea to Asia. Both plants are used to make infusions by steeping their leaves in hot water, and interestingly, they both contain caffeine.

Tea is herbal and mild; yerba mate is also herbal but bitter, even astringent, so the South American infusion’s flavor is more intense. As for caffeine levels, yerba mate contains much more caffeine than green tea; in fact, it can contain as much caffeine as coffee!

Another similarity between yerba mate and green tea is that they both are high in antioxidants, plant-based molecules that keep free radicals in your bloodstream at bay. These particles are responsible for many chronic diseases.

Yerba mate and tea are reasonably similar — they’re both plant-based infusions. On the other hand, the only thing coffee and yerba mate have in common is the high amount of caffeine.

Depending on how you prepare the mate and its quality, an 8-ounce serving has an average of 70mg of caffeine. A cup of coffee has 120mg, and that’s not such a big difference.

Flavor-wise, yerba mate is herbal, fresh and leafy, and coffee tastes like roasted coffee beans, smoke, char and sometimes dark berries. In this department, yerba mate is much more similar to green tea than coffee. In fact, yerba mate can be found sold in tea bags, and you can’t say the same thing about coffee.

There’s another similarity between yerba mate tea and coffee. They’re both diuretics, and this means they make you go to the bathroom more often, as your body increases urination to restore your fluid balance.

If you’ve never tried mate before, consider it a strong, bitter tea. Don’t think for a second it will taste like coffee because it won’t. Still, expect a caffeine buzz not dissimilar to what you get from a good old cup of coffee.

What Are The Benefits of Mate Tea?

Yerba mate tea has forever been an enjoyable social beverage, but it also plays a role in traditional medicine. In fact, yerba mate is now considered a trendy superfood, and many modern diet philosophies consider it essential. Is yerba mate good for you?

Yerba mate contains caffeine, which, as you know, can be addictive. Still, caffeine is considered good for you in moderate quantities, as it boosts your metabolism, in fact, even helping you lose weight.

On the other hand, yerba mate is a concentrated infusion of leaves and twigs, so it contains massive amounts of antioxidants. Antioxidants keep free radicals at bay, compounds in your bloodstream that cause oxidative stress by damaging your cells at a DNA level. Antioxidants bind with free radicals, preventing them from doing more harm. It comes without saying oxidative stress causes premature aging and hypertension, which leads to more severe conditions, including heart disease.

Many have attributed yerba mate with dozens of health benefits, but most of them haven’t been proven medically, so don’t believe everything you read. Yes, yerba mate tea is good for you in moderation, but it’s not the solution for your every health problem as advertised.

How To Make Yerba Mate Tea?

Let’s end our short introduction to yerba mate tea with a detailed explanation of how to prepare the herbal tea. The easiest way of enjoying yerba mate is getting mates in tea bags. Just treat them like regular tea, and you’re good to go. Of course, traditionally, mate is sold by the pound, and you need special equipment to infuse it without ending with a messy cup of herbal tea.

A round, hollow gourd is often used to prepare and consume mate. You add the herb followed by hot water. You also need a straw with a filter, called bombilla — it helps you avoid sipping the leaves and twigs. Yerba mate is so intense that you can pour more water over the spent herb a few times and still end with a flavorful infusion.

A common way of enjoying yerba mate in summer is making tereré; an infusion made with cold water — just like iced tea. And if you visit South America, you’ll find mate tea in convenience stores, just like soda. Sometimes it’s even carbonated!

How’s that for an herbal infusion? If you’ve never tried mate, do so. It will take you to South America and back with every sip.

Check out other Drink posts:

The Best Breakfast Restaurants in The World

Breakfast is the most important meal of the day, not only because you need to replenish...