What Is Rooibos Tea?

Rooibos is a tea also known as red tea. This red-colored tea from South America is obtained by harvesting the leaves, brushing them before being sprayed with water, and allowing them to ferment while cooling in the sun. 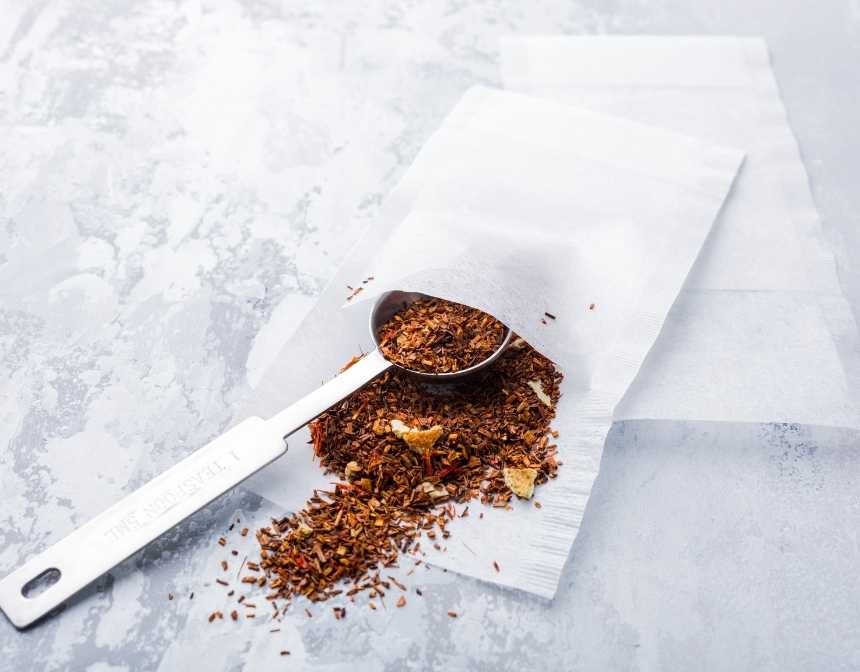 All About Rooibos Tea

You can get green rooibos which is the unfermented version and carries an alternative flavor profile that is grassy and has a malt-like aftertaste and an additional price tag and is less widely circulated when compared to rooibos tea.

Rooibos is a very popular drink within the mountain region of Cedarburg in South Africa who has been brewing rooibos for over 300 years. While the rooibos flowering plant itself was recorded by botanists back in 1772, the Aspalathus Linearis Flowers are used to create rooibos.

Cutting and bruising the leaves and the stems of the flowers then drying them out in the sun similarly to oolong and green tea production makes their red-brown light color characteristic.

Traditionally local South Africans would climb into the mountains to cut the needle-like flowers from the rooibos plants. The leaves were then rolled into hessian bags and brought down from the mountains on their backs. Using donkeys, the flowers and stems were then traditionally beaten on a flat rock with a wooden pole or club to encourage what we now know as oxidation.

Rooibos is not related to oolong, black, or green tea yet is served similarly to mainstream teas as black or with milk and the option of adding sugar. Rooibos is widely available now in supermarkets and health stores across the globe.

Rooibos is most popular in the UK, Germany, China, Japan, and the USA. The South African Department of Trade and Industry has a caveat on using the words rooibos, red bush, rooibos tea, and others to protect the production and harvesting of the Aspalathus linearis plant, its history, and its flavor profile when used all across the world.

A multi use tea rooibos is also favored as a DIY natural solution to revive natural and dyed red hair, creating a hair mask based on rooibos tea leaves naturally red and brown.

What Are The Benefits Of Rooibos Tea?

Like oolong tea, rooibos may benefit those with type II diabetes; this is because the damage associated with diabetes can be prevented through rooibos's antioxidant element.

Rooibos is very low in tannins at 4.4%. This makes it an excellent choice for those who prefer a milder tasting tea or have digestive issues following an assumption of tannin-rich drinks. The low tannin number makes rooibos a good choice during the detox.

Does Rooibos Tea Have Caffeine?

Rooibos naturally does not contain caffeine. Rooibos is the team of choice for those avoiding additional caffeine stimulation or unable to have caffeine within their diets. There is no decaffeinated process for rooibos. It is just a naturally caffeine-free drink.

What Are The Side Effects Of Rooibos Tea?

Rooibos is widely considered safe for everyone due to its caffeine-free status. Like any drink or food, consume moderately to continue positive side-effects and health benefits. If you're looking to include rooibos within your diet, replace any other caffeine drink or hot drink you consume during the day for this caffeine-free, light, flavorful hot drink.

As a natural drink promoting healthy digestion, rooibos can regulate your bowel movements and bring a sense of comfort to your digestion, realigning your system after a period of balance. However, If you over include rooibos within your diet, you could cause liver issues, as is the case with most other food and drinks.

Be mindful of your consumption of rooibos, and if you have any nutritional or health concerns, seek professional guidance from a qualified nutritionist or medical professional.

Does Rooibos Make You Sleepy?

Rooibos is known to calm the nerves. While it won't make you sleepy, it regulates your nervous system and centers and balances you internally, allowing for relaxation and calmness to be key elements for a restful sleep.

As rooibos is packed with micronutrients including iron and copper, it's a popular tea for a healthy tasting brew just before bed.

How To Make Rooibos Tea?

Aspalathus Linearis flowers, leaves, and stems are shaken and cut from the bush and intentionally bruised to encourage the oxygenation process. The leaves are then laid out in the sun for several hours to dry to create a withering effect and to assist in the tea leaves losing their moisture content the softened tea leaves.

This process encourages the distinctive red and brown color to appear and enhances the bush's flavor profile. The plant itself is green, so it does not turn into a notorious red copper hue without its withering and oxidation process.

The tea leaves are then rested to allow them to cool down after being sat in the sun. The tea leaves are allowed to flatten and wilt, and they begin to change their natural shaping due to the chemical reactions within the leaves from the heat and the subsequent cooling process. After this, they're ready to be used.

Rooibos is generally graded due to the percentage of needles or leaf stem content within the rooibos mix. This is due to the needle-like appearance of the flowering bush. The higher the leaf content, the darker the tea is, the richer the flavor profile is, and the less dusty or grassi the aftertaste. Grading information should be provided on the box or by your tea leaf supplier.

How To Brew Rooibos Tea?

Rooibos has the taste flavor of yerba mate and tobacco while also having a sweeter zing to its flavor profile, especially when paired with a natural sweetener such as lemon or honey. While rooibos is fundamentally a tea, it is also served in espressos, cappuccinos, lattes, or during hot and summer months of iced tea.

To prepare rooibos tea, just add freshly boiled water and allow it to break in the same way you would make any other tea. Brew for at least three minutes for the optimal flavor, or leave the teabag in the cup if you're using rooibos in a bag. You can purchase tea bags as well as loose leaf rooibos tea. Some research suggests brewing rooibos for 10 minutes or longer creates an extra rich antioxidant beverage.

If you're looking to sweeten your rooibos try adding a spoon of honey into your tea rather than a refined sugar version. Agave syrup and guava nectar also work well as natural sweetness.

Chocolate-peanut butter no bake cookies have been a staple in many American households for a while now. With their short list of ingredients and super...

Chaffle is not stranger to you if you are following ketogenic nutrition diet, closely following health blogs or if social media occupies the majority of...

Warm pastries out of the oven… The taste of these puffy and soft pastries is simply amazing. You can make these easily at home, with any filling you...

The Classic French Madeleine is a recipe that steals your heart with its soft texture and appearance as well as its taste. This cake, known for its tiny...

One of the most popular recipes of recent times is Banana Bread. No wonder this delicious recipe is especially popular with Influencers.A snack that you...

You can take a look at our Herbal Teas post to learn about other healthy teas and their benefits.

There are lots of things to consider when picking cheese for your pizza, which can...

Pumpkins are an all-American-fruit that we all enjoy during the holiday season. Pumpkins,...

Enjoying a hearty and healthy breakfast is a great way to be active all day. There’s...