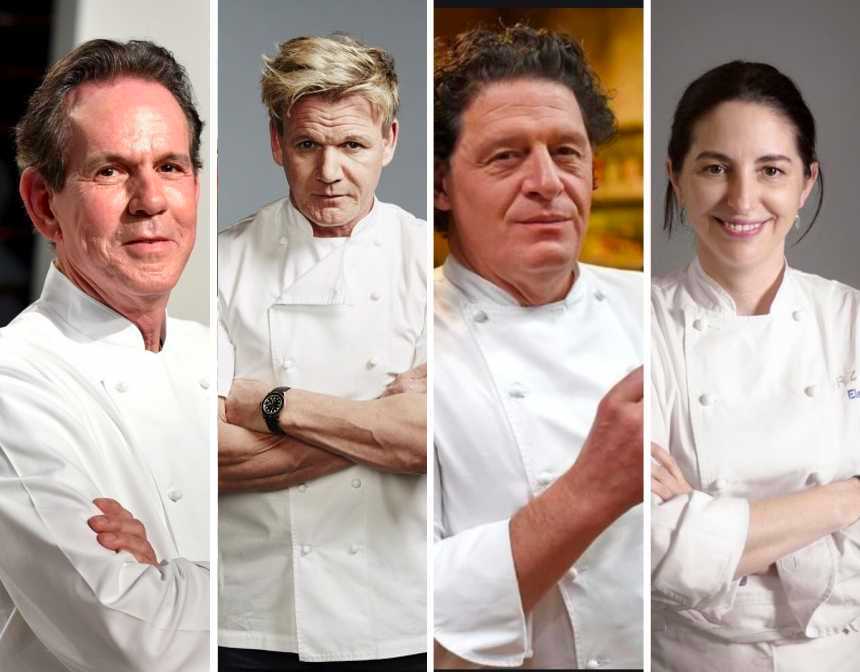 Born in 1966 in Johnstone, Scotland, and growing in Stratford-upon-Avon, England, Gordon Ramsay is a chef, restaurant owner and author. In 1993, Ramsay became chief of Aubergine in London, and in three years Aubergine won two Michelin stars. At the age of 35, Ramsay opened his first restaurant with his name. He quickly received three Michelin stars, the most prestigious award. Restaurant Gordon Ramsay is London's longest-running restaurant.

He opened many successful restaurants around the world, from the UK to France, Singapore, Hong Kong and the United States.

Born in Oceanside, California in 1995, the chef is known for his revolution in French cooking technique. The restaurant owner also has author and educator identities. The world-renowned cook, who owns The French Laundry, Napa Valley Restaurant, and Perse, is also known for his consultancy for films such as Ratatouille and Spanglish. He is the only chef who managed to get three Michelin stars with his two restaurants in America.

He is currently teaching at Masterclass, an online education program. He is also shown as one of the top 5 chefs in the world.

Born in 1961, the English chef is known for being the youngest and first British chef to receive three Michelin stars at the age of 32. Although White worked seventeen years to pursue his ambition, ultimately, despite his successes, recognition and fame, he found that her career did not provide him with sufficient returns in his personal life. He retired in 1999 and returned the Michelin stars. He also has a career in television and film industry, just like other chefs. In September 2007, he acted as chief conductor in ITV's Hell’s Kitchen TV series. It appears in the advertisements of the Unilever brand Knorr in the UK. In addition, he has been involved in many jobs in the same industry.

The fact that the legendary chef of the Basque cuisine is Juan Mari Arzak's daughter may actually explain her interest in the food. Elena Erzak, who helped family meals in her own kitchen at the age of 11, gained experience in many restaurants to prove herself. When she proved herself to her father, she started working in the family restaurant. Kitchen is a passion for supply and there is no time to work. She also took part in The Restaurant Show in London, England in 2011. In addition to making a food show, she opened the show with Rachel Quigley. She was nominated for Restaurant Veuve Clicquot award for the Best Woman Chef of the World in the same year, but won the award in 2012 the following year.

Bread is undoubtedly the most important part of the tables all over the world. Its...

Cucumbers are mostly water, but they’re still delicious. Fresh and firm, this veggie...

Hello cookie lovers!The ultimate pair to tea and coffee, here are some addictive...