Cooking Measurements and Conversions Made Simple

There are a lot of different ways to measure ingredients out there, which can make things daunting. We’re here to simplify things for you! 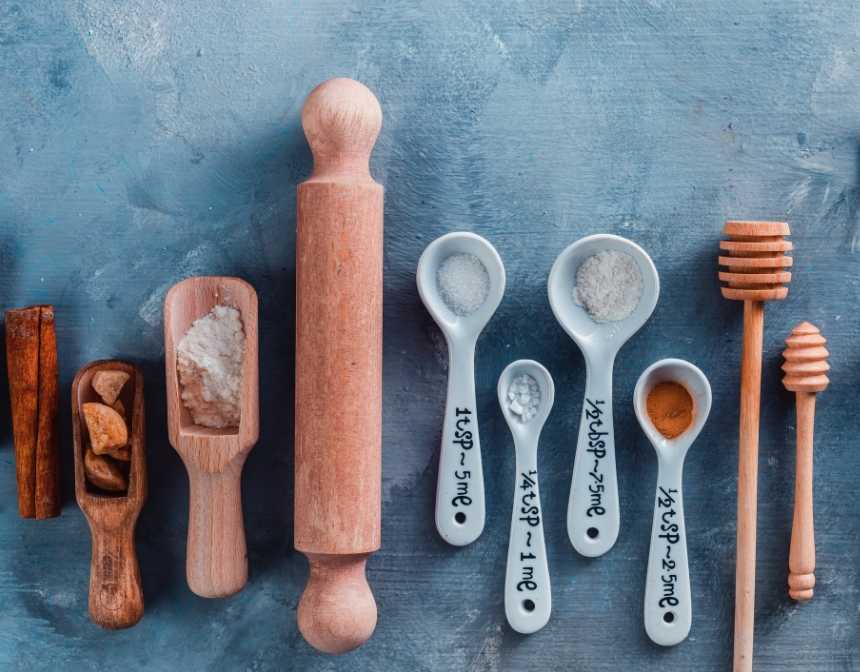 Cooking measurements can be truly perplexing. Some of them are weight-based, some of them are volumetric, and, the real kicker: not all spoons are the same size!

The thing is, cooking and baking should be simple. In no time at all, we’ll make sure that you can easily do as many conversions as you like with nothing but your brain.

How do you convert measurements for cooking?

For example, could anyone really say that a cup of flour is the same amount of stuff as a cup of grated cheddar?

Before we get to the main meat of how to convert measurements, let’s quickly take inventory of all the bits and pieces we’re going to be talking about.

Firstly, there are measuring spoons. These are a fairly simple piece of equipment, and typically involve a set of spoons of assorted sizes all attached to one another on a ring.

These are useful for recipes that call for, for example, half a teaspoon of something. Typically one of the spoons will be that exact size.

Secondly, we have measuring cups. Measuring cups typically come in sets of three (one cup, half a cup, and a quarter cup) and are used to measure dry ingredients. The way to use them is to fill a cup, and then level the top off with the back of a knife.

Lastly, there’s a kitchen scale. Kitchen scales are used to measure things out by weight and usually can switch between metric and imperial measurements at the press of a button.

These are really handy for step-by-step recipes as you can quickly see how much water, for example, you’re adding to the dough in your mixing bowl.

To convert between different types of measurements, you have two options: memorize a lot of numbers, or get a little chart.

Getting a chart is a wonderful way to improve the speed of your measurements in the kitchen, as a good one will typically allow you to quickly and easily change from ounces to grams to tablespoons!

That might sound like some random numbers, but once you’ve got it memorized doing some simple sums in your head to work out measurements becomes much simpler.

Some more good measurements to bear in mind are the ones that are used for converting liquid measurements. For example, there are eight fluid ounces in a cup, two cups in a pint, and two pints in a quart!

While you won’t cover all your bases this way, those are some easy rules to remember to help you save time in the kitchen.

While we’re talking about some simple measurement facts, we ought to speak about the difference between metric and imperial measurements.

Imperial measurements are the norm in the US and include things like pounds, ounces, and cups. This is a very old way of measuring things and works well in a number of circumstances.

The place where it becomes tricky, however, is that a lot of the measurements used in imperial cooking are volume-based. For example, a cup of flour is simply as much flour as you can fit in a standard cup.

The problem with that is it leads to confusion with certain language problems. For example, both ounces and fluid ounces are standard imperial measurements.

Metric measurements are a French invention that streamlines a lot of measuring. Each increase in size ten times bigger than the previous iteration. For example, there are ten millimeters in a centimeter, ten centimeters in a decimeter, and ten decimeters in a meter.

This is useful for cooking, as you can easily calculate weights which may work better for your scale. On top of this, metric measurements are all clearly defined as weight-based or volume-based.

What is the standard way of measurements?

Well, that depends on where you live.

The vast majority of the world uses the metric system for cooking measurements. For example, any cookbook in Europe will almost certainly list ingredients in grams and milliliters, even if the book itself is old.

The US is nearly the only country in the world that uses the imperial system when cooking, leading to complicated cooking measurement conversions that can be tricky for learning cooks.

The only discrepancy for that is that some countries (such as the UK) use a little of each, as imperial was the standard system until quite recently. This means that it’s common to hear someone say that they’re planning to buy, for example, three kilos of potatoes, but that they are six feet and two inches tall.

This mishmash can lead to some confusion - a lot of older cookbooks may have both sets of measurements in them, or perhaps a cooking measurement chart that’s written in the early pages to help you cook.

Now that you learned about cooking measurements, it is time to put it in use with these delicious recipes.

This dinner, which will turn your dinner into a feast, is both light and delicious. Now you should try the chicken, which has become a different flavor...

Creamy Baked Potato is an easy and delicious recipe that you can make on special occasions such as Thanksgiving, Christmas or family meals.You will feel...

Chicken has been on our tables in every period of history. Different forms of it have emerged in history. As can be understood from the name of our recipe,...

Fabulous duo of English cuisine with Yorkshire pudding and roast beef. A recipe that will turn your dinner into a feast.

This cookie will be among the indispensable with its flavor. Its texture, scattered in the mouth will delight your guests.

The Mediterranean diet has long been lauded for its superb results, and how impressively...

Home bakers and online kitchen tutors will prompt you to classify cakes according...

Its name, form, or the ingredients change from culture to culture, but the passion...

Brandy is a popular brown spirit worldwide and is more varied than you think. There...