Beef tartare can be prepared at home with raw beef, egg yolk, capers and mustard. It can be served as a tapas in summer or as a main course.

If you love to eat meat, try this Steak Tartare recipe for family dinners. You can make this delicious classic dish at home by using quality and reliable ingredients. Bon Appetit. 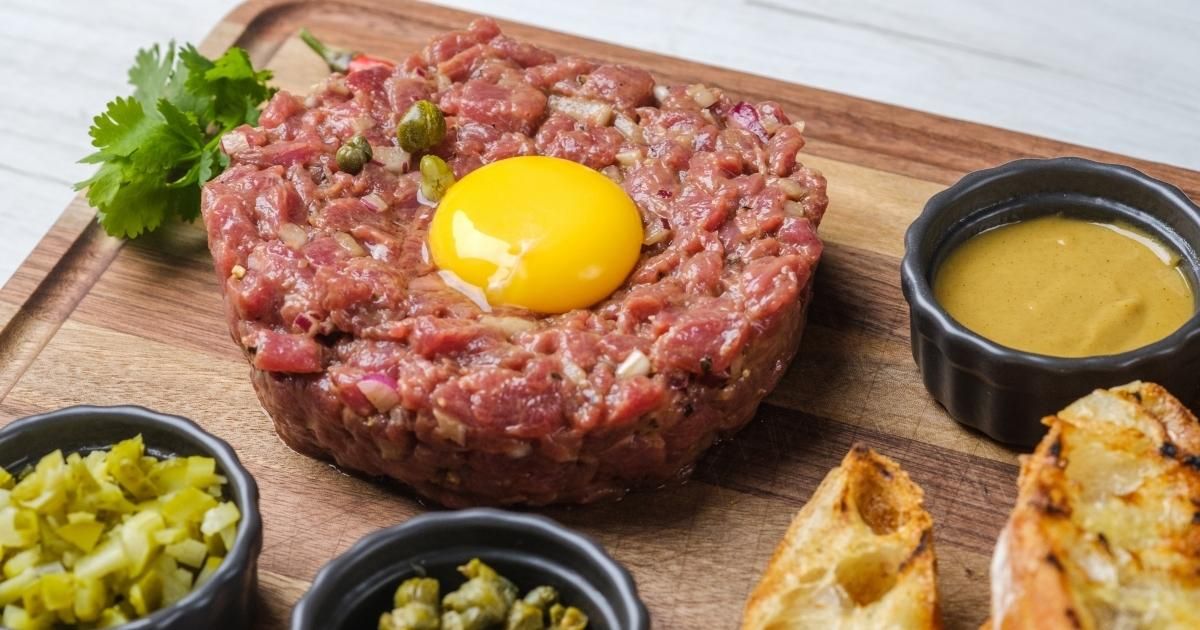 What Is Steak Tartare?

Steak Tartare is a meaty dish prepared from uncooked minced cow meat. It is traditionally served alongside shallots, olives, pepper, Fish sauce, and other spices, often given to the diner individually, to be mixed according to taste. In addition, it is typically served with uncooked egg protein on top of the meal. The term tartare is also extended to various raw meat or fish meals.

The raw beef is combined with many toppings and spices before being served at ambient temperature or somewhat cooled. Raw meat is blended with several toppings, the most popular of which are uncooked egg yolk, anchovies, cucumbers, and additional spices like Worcestershire sauce or Dijon mustard. Seasoning blends are added when the beef is cut into tiny pieces or finely minced in a mixing bowl. Steak tartare is generally served along with French fries or bruschetta as a side dish.

What Cut of Meat for Steak Tartare?

There are numerous traditional recipes on beef tenderloin, a readily accessible delicate meat lacking in fat, connective tissue, and tastes flavourful. Sirloin is also one of the most costly cuts of beef. Because of its structure and much more potent flavor, beef upper round and beef sirloin flap is also called bavette) they are less expensive and create a far superior tartare.

Is Steak Tartare Safe to Eat?

Since "steak tartare" is undercooked, it may still contain hazardous germs that may induce food contamination, which can only be eliminated by cooking ground beef to 165 °F. Therefore, the one who suffers from severe allergies should never consume steak tartare. However, a person with no health issues can consume this dish because there are fewer chances of getting sick.

Tartare Steak is perfectly safe to eat as long as it has been properly cooked and handled carefully. There will always be a danger of foodborne disease while eating raw meat, but you may do your best to prevent them with the following practices:

What To Serve with Steak Tartare?

As an appetizer, steak tartare is often served with a stack of warm, freshly baked bread with various sauces, and occasionally French potato fries are served. The tartare steak recipe can be served with dijon mustard and many vegetables such as lettuce or olives.

Here are our some delicious recipes that you can serve with Steak Tartare:

How To Store The Steak Tartare?

Soak the chickpeas in 3 cups of water.Cut the eggplants and tomatoes into cubes....

Fatteh is one of the ceremonial dishes in Egypt. This dish, consisting of roasted...

Grilled Zucchini is a must for all summer barbecue parties. You can prepare a practical...

The benefits of Jerusalem artichoke to our health are endless. Give a chance to this...

Century Eggs are a type of egg prepared by soaking duck eggs in a mixture of salt,...

Ratatouille is one of the traditional flavors of French cuisine. It is an indispensable...