What Is Tuna & How To Cook It?

Tuna is a versatile, widely available oily fish with endless uses. Known as the chicken of the sea, tuna is what you need for a quick meal. 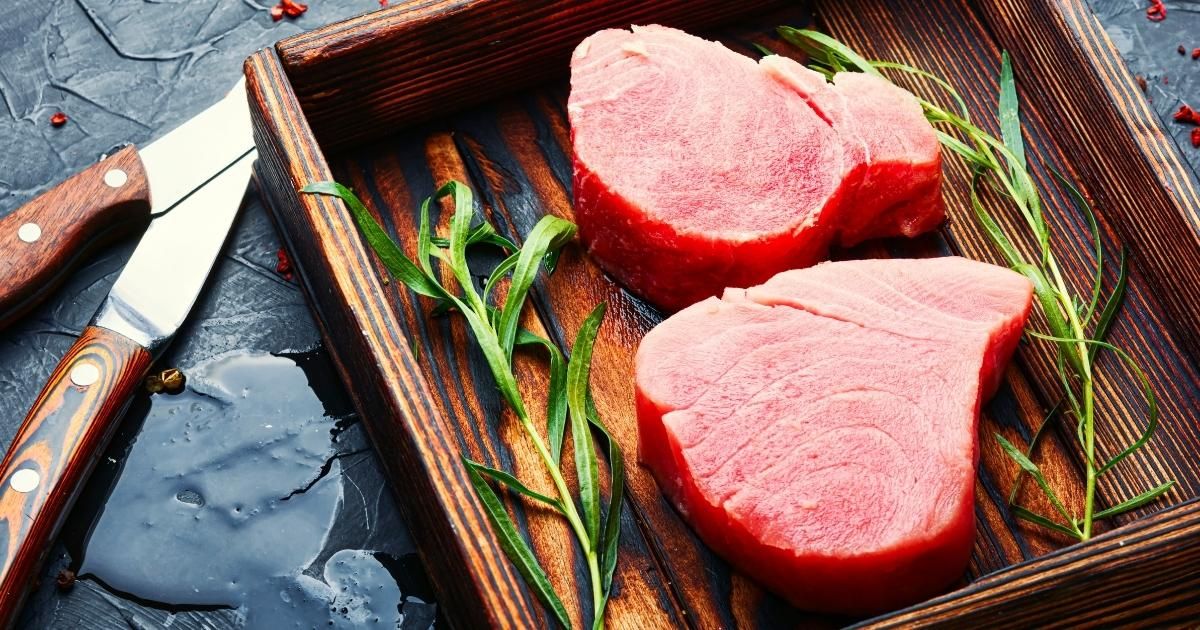 Tuna, of course, can vary. Not all tuna comes from a can, and there are different ways of cooking tuna. Here are our favorite ways to cook tuna. Choose yours and let’s enjoy the flavorful fish!

Tuna is a family of saltwater fish. In fact, fifteen fish species, large and small but with similar characteristics, are called tuna. This is one of the most popular types of fish commercially used for human consumption.

Some types of tuna are even at the risk of extinction due to overfishing. However, other varieties, like the yellowfin tuna, are still a good protein source and an excellent alternative to unhealthier red meat.

Tuna is an oily fish, which means it has significant fat content, translated into flavor and a smooth texture. Here’s how to make the most out of such tasty fish.

Is Raw Tuna Safe to Eat?

Tuna is one of the most popular types of fish for raw consumption. Cooking tuna can result in dry meat, and the raw flesh is flavorful enough to be enjoyed as-is. Although there are many ways to cook tuna, it’s not uncommon to find it raw in many countries. Is it safe?

Like all raw meat, tuna can have parasites that can be harmful to humans. And although there’s a high risk of finding contaminated tuna on your plate, the way the fish is handled and prepared matters. Most parasites die when tuna is cooked or frozen.

Cooking tuna is essential to prevent food-borne disease, but it’s not necessary if you’re working with high-quality fish. To be safe, you’ll find fun, traditional ways of cooking tuna below. From refreshing summer salads to comforting pies, these are the best ways to cook tuna. Which is yours?

To cook with fresh tuna, the secret is not to overcook it. A medium-rare or seared tuna steak is a beautiful meal. You don’t have to worry about that if you’re working with canned tuna. Either way, cooking with tuna is easy, and the result is often delicious!

Raw: Enjoy sushi-grade tuna raw. Ensure you source the fish from reputable fishers and consume it as soon as possible. Making sushi and sashimi with tuna is easier than you think!

Grilled: Tuna steaks are best enjoyed seared over a blistering grill. You want a charred crust and a raw core.

Stewed: Canned tuna is a wonderful addition to stews and casseroles. Cooked with potatoes, onion and tomatoes, you get yourself a lovely meal.

Canned: Not everyone loves the flavor of tuna straight from the can, but others swear by it. Use canned tuna to make salads and sandwiches.

Tuna steaks are a fancy meal worthy of the most memorable occasions. Glazed with soy sauce and honey or coated with sesame seeds, there are many ways to add layers of flavor and texture to the already delicious fish.

These are best enjoyed seared and not cooked through, as the meat dries out quickly. Tuna steaks are trendy, and you’ll find a version of them in every other restaurant — even steakhouses.

Tuna steaks can be pretty fatty, and they’re always fork-tender, so it’s easy to see why so many people like their tuna this way. Cooking tuna like any other steak is always fun!

There are many ways of adding tuna to salads. If using canned tuna, you don’t need to do anything but toss the fish with the rest of the ingredients. A typical tuna salad might include macaroni and mayonnaise, chopped celery and pimento. Other salads are not creamy but refreshing.

The famous Niçoise salad, a French staple, combines lettuce, hard-boiled eggs, tuna, green beans and several other ingredients, often with a light vinaigrette for a beautifully composed salad. You don’t need a recipe to create a colorful tuna salad; follow your heart!

There are several versions of the fish in Spain, France and Latin America. The most common way of cooking tuna this way is by combining canned tuna with mashed potatoes, rolling two-bite-sized dumplings, coating them with breadcrumbs and deep-frying them. What a delight! These croquettes are delicious, warm or cold.

Tuna is a popular filling for subs and sandwiches. Perhaps they’re too fishy and smelly to take to the office, but tuna sandwiches are pretty popular.

Also known as a tuna salad sandwich, one can flavor and condiment the tuna before assembling the sub, which adds complexity to the grab-n-go meal. Finely minced veggies can add color and texture to the otherwise bland sandwich filling, but other than that, this is one of the easiest and most universal quick meals in the world! Of course, no tuna sandwich is the same.

Tuna pot pies are nourishing and comfy. It’s one of those dishes that fills your kitchen with the most delightful scents while it’s in the oven. Like all pies, there are many versions of the tuna pie. Some are made in a conventional pie pan, and others are made with puff pastry and rolled for individual two biters.

Tuna is the main ingredient here, but sweet corn, peas, and even cheese can make these pies more interesting. Latin countries make puff pastry empanadas with tuna, also a type of pie.

Tuna is The Most Versatile Fish!

There’s no doubt you can make dozens of dishes with tuna, and they all benefit from the oily fish’s sea-scented personality. Tuna hardly disappoints, and it’s the main ingredient in everyone’s go-to recipes. Even people that don’t enjoy fish all that much like tuna’s mild flavor.

Cook with tuna, and you’ll be eating tastier and healthier. You’ll save some money as well. Needless to say, consuming tuna instead of beef, pork and even poultry is a better alternative health-wise. What are your favorite ways of cooking with tuna? We’re sure you have a few tuna cans somewhere in your pantry!

Tuna is one of the most preferred fish with its easy accessibility and taste. A tuna sandwich is a must for a light and satisfying meal. Tuna and a few...

Tuna noodle casserole is an American pantry dish that you can easily make at home. This dish is usually topped with crispy potato chips, cereal, breadcrumbs...

Tuna Steak is a recipe that you can easily prepare at home. Whether grilled or cooked on the stove, you'll love this delicious fish. Ideal for a quick...

Food is great, and so is wine - we will never try to contradict that. The thing that...

Discover the different types of wedding cakes, from classic styles to modern creations,...