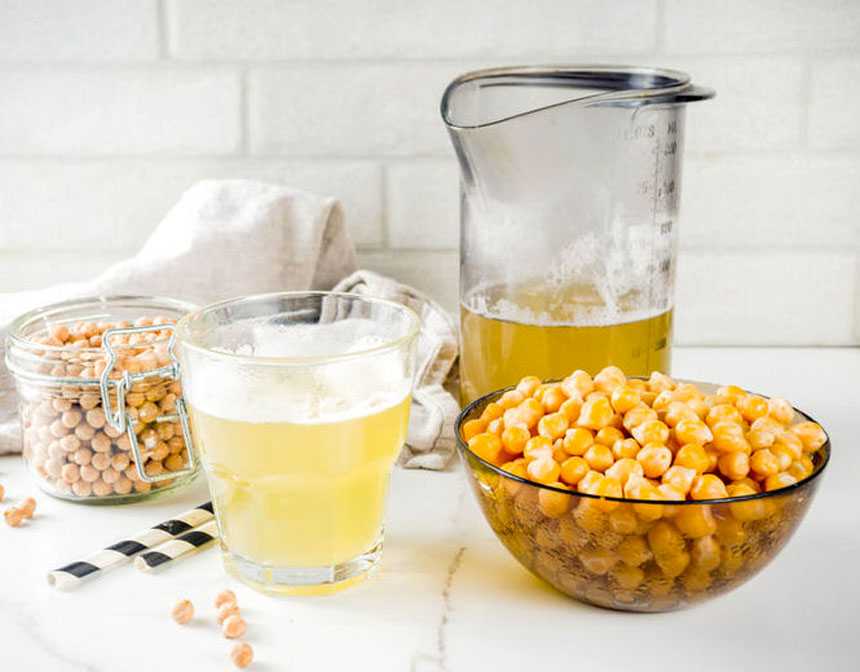 Aquafaba is a trendy new food that has many interesting uses. Often featured on social media and health websites, aquafaba is a liquid in which legumes such as chickpeas have been cooked or stored. It is especially trendy among vegans and most commonly used as an egg substitute. What makes Aquafaba so popular is that it can be used as an alternative to eggs in recipes due to its high protein value and structure.

Aquafaba is especially preferred by vegans. Vegans, who do not consume any animal food such as meat, milk, eggs, can obtain the protein they need from this miraculous food. Those who are allergic to eggs or those who do not like to eat eggs can often prefer Aquafaba other than vegans. The name of this food is the combination of the words aqua and faba, which means “water” and “legumes” respectively in Latin.

What is Aquafaba made of?

Start with boiling the chickpeas you have soaked a day before. After chickpeas boil, turn off the heat and rest it. Leave the chickpeas in the pot for 24 hours without removing them from the water. After 24 hours, you can sieve chickpeas from water. The dense liquid at the bottom is exactly the Aquafaba itself. It lasts 7 days in the refrigerator.

What benefits does Aquafaba provide?

Aquafaba draws attention with its high protein structure. It is very rich in antioxidants and contains healthy oils and it can be easily consumed by those who are on a low calorie diet. Aquafaba is also said to have a wound healing and cell regenerating feature.

Things you can make with Aquafaba

Mayonnaise is a delicious blend with many foods. If you are vegan or are allergic to eggs, you can easily make mayonnaise with Aquafaba. All you have to do is add Aquafaba to your mayonnaise recipe instead of eggs.

Did you know that with Aquafaba you can make a cream that you can easily use in every dessert? You can make cream by whisking vanilla, sugar and Aquafaba trio in a bowl.

Making a butter that vegans can easily eat with Aquafaba is quite simple. You can get butter in a few minutes by whisking apple cider vinegar, salt, coconut oil and olive oil in a bowl.

Who doesn't love delicious colorful macarons? You can get an exquisite result by adding Aquafaba instead of egg whites.

On this list, we’re going to be sharing with you some of the best chicken wings...

Mussels are magnificent mollusks that come from a wide variety of different spots...

How to Choose and Cook Legumes