How to Clean and Cook Mussels?

Mussels are one of the most loved kinds of seafood around the world, but what are they, really? Here is everything you need to know. 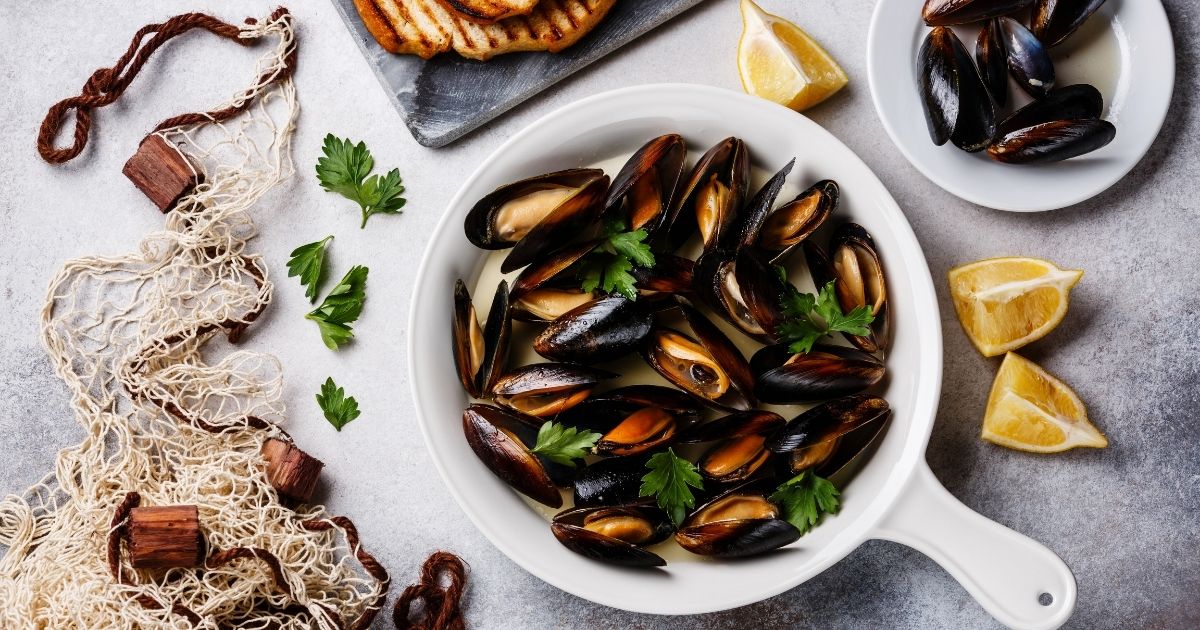 Mussels are magnificent mollusks that come from a wide variety of different spots around the world, from saltwater to freshwater, and everywhere in between. They have a distinctly unique taste, and are adored by billions of people!

Mussels are super renewable seafood. Here is the use of mussels in the kitchen!

Before now mussels have been called a number of things, though they were once rather unjustly considered the poor relation of the shellfish family. This is because they’re fairly small and exceptionally abundant.

They’re particularly popular, in part because they’re cheap, and in part, because they’re simply delicious. The most common mussels have sleek, shiny shells and tender, nutritious flesh. Like oysters, they feed indiscriminately and thus must be harvested from unpolluted areas. Because of this detail, most mussels in supermarkets and fishmongers are farmed rather than harvested wild.

How To Cook Mussels?

The simplest way to cook mussels is, essentially, to steam them in a, particularly flavorful pan. This is best done by gently frying some shallots and garlic in a pan to start with. Cook them until they’ve softened, but not browned. Then, add in roughly a glass (75ml) of white wine, and give it a moment to boil off so that any alcohol will be removed. Then, add the mussels to the pan. You can add some herbs here (we’d recommend parsley), and then put the lid on the pan. Cook them for 3-4 minutes, where they will steam and boil in the wine mixture. Make sure to shake the pan to ensure the mussels are well distributed. After 3-4 minutes, the mussels will be cooked. Add them to a serving bowl, and pour the cooking liquid over the top of them. Then, simply, eat the flesh, discard the shells, and serve with some crusty bread to soak up the cooking liquid.

How To Clean Mussels?

Cleaning mussels is a very necessary part of the cooking process - mussels get quite dirty while they’re growing, and you don’t want to get any of those things in your diet.

First of all, start by scrubbing mussels in cold water - this will remove barnacles or sand which would be gritty and potentially dangerous to eat. While they’re in the cold water, discard any which happen to float to the top.Give any open mussels a sharp tap with a knife, and if they fail to close, discard them. Next, remove the ‘beard’ from the mussel. The beard is a fibrous clump of hairs that sprout from the base of the shell, not unlike roots on a plant. The best way to remove it is to give it a sharp tug toward the hinge end of the mussel. Once cleaned, place the mussels in a fresh bowl of cold water until you’re ready to use them. We’d recommend changing the water in that final bowl two or three times. The mussels may expel salt or sand, which you can remove by discarding the water.

Are The Mussels Good For You?

The main reason that people don’t eat shellfish (including mussels) is that they are worried about any potential mercury that the shellfish might contain. Shellfish contain mercury because they filter a lot of water through their bodies, and over time, trace amounts can accumulate.

If you make sure to eat less than twelve ounces of mussels per week, there should be no hazard to your health. Truly, larger fish like swordfish tend to accumulate more mercury than small shellfish.

Another reason that you might choose to avoid mussels could be if you have an allergy to shellfish. Of course, if you are allergic to shellfish, do not eat mussels!

Anyone who has a shellfish allergy should have a prescription for epinephrine, but they should also be sure to be vigilant about avoiding hidden shellfish, to be on the safe side.

The final reason that you might want to be wary of mussels is that a number of people enjoy eating them raw. However, when raw, they can be hazardous. If you have cancer, liver disease, diabetes, immune system ailments, or any kind of digestive disorder, you would be more susceptible to contaminants. Therefore, make sure to only eat mussels once they have been thoroughly cooked.

Benefits or Side Effects

The benefits of mussels are numerous and impressive - they have a wide variety of nutrients within them, which makes them ideal for a number of people.

First things first - they’re an exceptionally high-quality protein. They contain all the essential amino acids, and the protein itself is fairly easy to digest, so your body gets the full benefit. Just three ounces of mussels can produce 40% of the daily protein needed for an average person. Plenty of protein can play a number of roles, from building muscle to bolstering your immune system.

Mussels are a stupendous source of iron. One three-ounce serving provides a third of the daily recommended iron intake. Many people don’t get enough iron in their diet, and this could be a great way to get enough iron in your system!

Mussels can also be stupendous for your heart health thanks to the large amount of omega-3 fatty acids that they boast. They keep your heartbeat regular, lower your blood pressure, and will help to ensure a wealth of blood vessels are working as they should.

Check out our other posts about Seafood:

Japanese food enjoys global fame, and you surely know why — the fluffy steamed...

Winter is here already and it brings its own ensemble of fruits and healthy vegetables....

The system that distinguishes the cells and tissues that do not belong to us in our...