Meet the 10 best seafood restaurants in the world, pure sea-scented experiences you can’t miss. Did your favorite restaurant make the list this time? 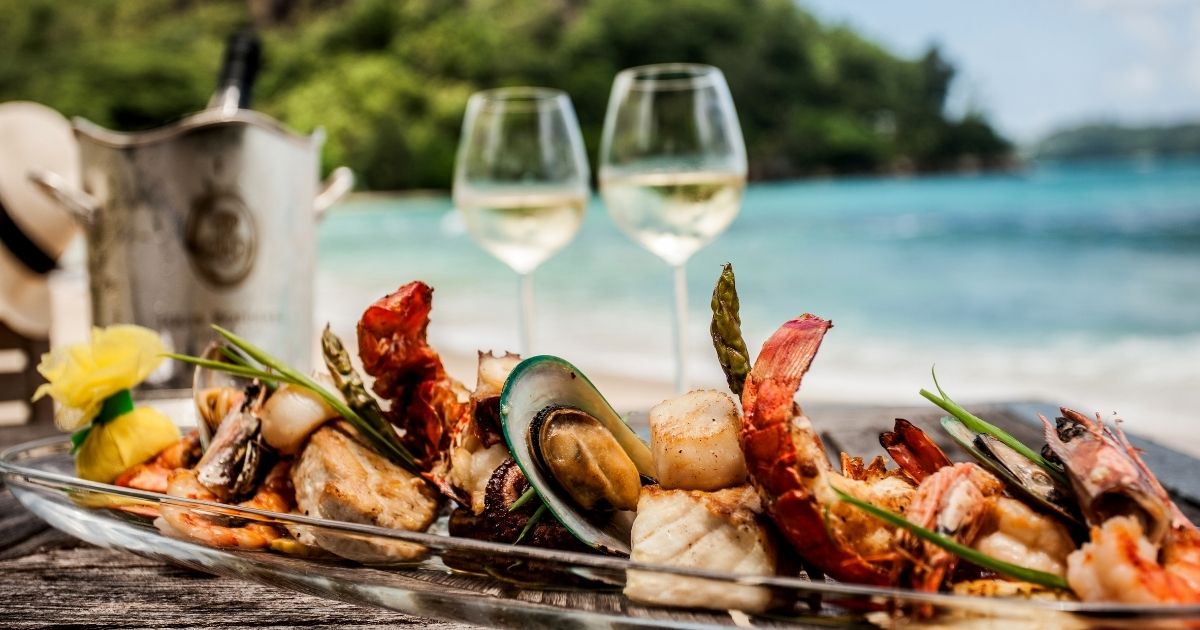 Not everyone can cook seafood and turn it into edible masterpieces, well the best seafood restaurants in the world surely deliver. Here’s a complete list of awesome restaurants you want to visit once in your lifetime, especially if you’re all about seafood.

10 Seafood Restaurants Around the World

Seafood is consumed all around the world, which means every country and culture has its seafood specialties. That makes making a list of the best seafood restaurants in the world quite complicated. There are just too many options!

Some restaurants have larger fan bases than others. Some are reliable Michelin-starred gastro-temples, and others are smaller eateries. They all serve astounding seafood, so see if there’s one of them near you and enjoy a fantastic sea-inspired meal. Seafood is incredibly noble, and when cooked right, it’s immensely satisfying! There’s nothing like it!

Opened in 2011, this homage to all things seafood in Chicago is the masterpiece of Chef Giuseppe Tentori — he’s genuinely redefining the American seafood scene with a modern but unpretentious seafood eatery to cater to all palates.

Everything is local here, especially the seafood and the multi-awarded chef and his team can certainly make even the simplest ingredient a meal to remember. Six types of single-origin oysters on the half shell, lobster and king crabs are the highlights here, but they also make a delicious crab cake with red pepper aioli.

Eric Ripert is the most acclaimed seafood Chef in America, and he’s amongst the most recognized worldwide. His restaurant, Le Bernardin, is a seafood temple. Expect a Michelin star service here, as the restaurant is amongst the finest in New York and not only in the seafood category.

With three decades catering to the most sophisticated palates in the country, eating at Le Bernardin is a life-changing experience. Ideal for memorable occasions, remember to make your reservation in advance and expect to pay a premium for dining in one of the finest restaurants the world has ever seen.

Miami’s Mandarin Oriental Hotel is home to La Mar, one of the most recent projects in Chef Gaston Acurio’s repertoire. The Peruvian chef is a great ambassador for the country’s love for seafood. He brings out the big guns at La Mar with the most vibrant traditional and modern Latin American seafood dishes.

The restaurant in itself is beautiful, with glorious views of Miami’s skyline, but you know you’re here for the food. There are 15 different styles of ceviche on the dedicated ceviche bar, and there are plenty of hints redolent of fine Japanese food. Peru has deep Japanese traditions that have evolved in what we know as Nikkei food.

Some of the best seafood in the world is found in the Japanese markets. Here’s where you’ll discover Kaikaya. Although the food here is very much Japanese, there are hints of European techniques making a meal here an extraordinary experience with a kaleidoscopic range of flavors.

Fish is delivered daily straight from the Sagami Bay, so everything is as fresh as it gets. And although the eatery is humble and often crowded, you can’t miss the opportunity of tasting Tokyo’s finest. Kaikaya caters to local and international visitors, so the menu is in English.

With locations in Sydney, Melbourne and Perth, this seafood and grill restaurant is growing in popularity fast. The seafood here is fantastic, especially the specialties cooked on the blistering grill. Of course, the produce is of the highest quality, and in Australia, we’re talking about the best of the best.

If you want more than seafood, Rockpool also has a reputation for serving premium grilled beef. Still, you’re here for the seafood and the impressive wine list. Don’t miss the caviar with toast, crème fraîche and the charcoal roasted seafood with coconut, chili and turmeric.

One of the most awe-inspiring restaurants in Paris is dedicated almost entirely to seafood and classic French preparations with a modern flair. Chef Alain Ducasse is larger than life and has inspired generations of your cooks for decades.

Paris is the most glamorous setting for a Michelin-starred meal, and it won’t disappoint. The menu changes with the seasons, but you can always expect a wide variety of European seafood specialties cooked traditionally with French precision.

Scottish salmon, wild sole and a colorful selection of local veggies and mushrooms are the color palette for the skilled chefs in this masterful kitchen.

This tiny sushi bar in the basement of a department store is a unique experience, not only because finding it is a thrilling quest, but because this is home to some of the most trustworthy sushi in Tokyo. And that’s saying something.

The restaurant owners are wholesale fish suppliers sourcing the finest seafood in the Tsukiji market. This means the seafood here is super fresh and of the highest quality. You’ll find this hidden gem near the Shibuya station.

Whether it’s fish and chips or an exclusive fine-dining experience based on the best seafood you can find in Paris, La Marée is for you. Chef Julien Combes is behind La Marée’s fantastic seafood menu, an homage to the city’s earliest seafood markets where good food is not necessarily expensive.

Affordable three-course meals, a small but well-thought wine list, and a lovely homey ambiance make eating at La Marée a lovely experience. Definitely not what you’d expect from one of the best eateries in Paris.

This traditional restaurant in Kennebunkport is an excellent example of the classic New England flavors. Set up in an old, restored barn, this AAA restaurant is the perfect setting for a special dinner, especially if you like seafood. Did someone say Maine lobster?

With 150 years of history, this is a seafood and chowder temple. Start the night with some crispy Brussels sprout chips and jump right into the seafood specialties. The menu changes often, but the acclaimed local seafood is always handsomely featured.

With inspiration in South America, Spanish and Gulf Coast seafood specialties, Chefs Donald, Stephen and Ryan have really put together an authoritative seafood grill with all the magical feel of New Orleans.

The James Beard award-winning restaurant has a fantastic raw bar featuring gulf shrimp and oysters. Still, the best comes from the wood-fired grill. Catfish, jumbo shrimp or grilled tuna with okra and tamarind sauce are all fantastic alternatives. Expect that comforting southern seasoning in every dish.

Crab cakes have been Maryland's signature dish for decades, and for a good reason. These luscious fish cakes are the perfect balance of sweet and salty,...

This chicken and shrimp Pad Thai recipe is exotic, fresh, light, and deceptively easy to make. The easy pad Thai recipe uses only a handful of pantry ingredients...

Salmon in the Oven

Salmon is a type of fish that contains many vitamins, minerals and proteins, especially omega-3, fatty acids and B12. It is very important for our health...

It is the most preferred hot appetizer dish of seafood tables with its soft inside and crispy exterior. You can make a delicious and healthy seafood calamari...

Check out our other posts about Restaurants:

Spain is a beautiful country with deep culinary traditions. Every meal is a celebration...

Mother Sauces You Should Know

Whether you’ve been cooking for a long time or you’re only just starting out,...