Uses and Benefits of Annatto (Achiote)

Mexico, a country of vibrant colors, great foods, a warm climate, and a lively fiesta! The spices, herbs, and moles of Mexico are widely used in other cuisines, cooking, and products. 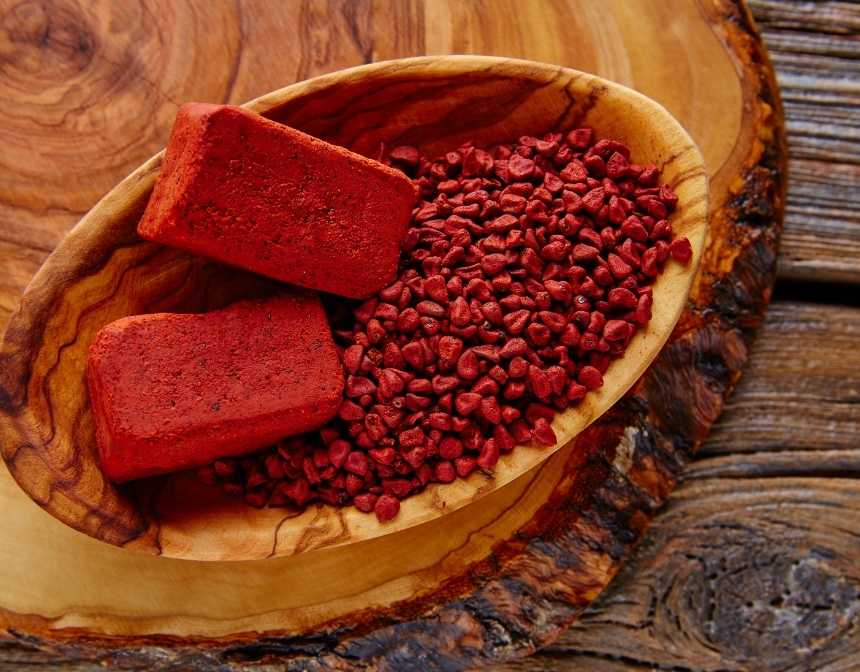 Market culture in Mexico remains a prominent way of life, full of fresh produce, seasoning, and fruit and vegetables.

Punchy with flavor, fresh zing from citrus fruits, and slow-cooked layered mole giving smooth yet complex flavors. Mexican food can be crafted quickly like guacamole or ceviche or slowly, over days as is the case with cochinita in pibil.

When you think of Mexico and Mexican food, you likely think of corn, chilies, limes, pulses, coriander, and salt—widely used liberally in their chili con Carne and moles. Yet, one of Mexico’s most outstanding ingredients is often hidden in the dishes you’re eating and in the kitchens that are creating your taste of Latin America.

As the bringing together of people over food remains part of Mexico’s cultural and food heritage. Naturally, Mexico wants to share its food secrets far and wide; today, let’s explore the spice that’s secretly used in many Mexican dishes, Annatto and Achiote.

Achiote paste is a spice ground from annatto seeds and is traditionally used as a seasoning in Yucatecan and Central American dishes.

It’s rumored that achiote was used by the Aztecs to add color to their version of hot chocolate! And that the paste was used as body paint and lipstick, with the Achiote tree named ‘The Lipstick Tree.’ Achiote has also been around for hundreds of years as a color dye for clothing and furniture. Nowadays, achiote paste can be picked up at specialized stores or easily online at a very reasonable cost.

So, we know what achiote is – but what is Annatto? Annatto is a seed from the Achiote tree, native to Mexico and Brazil; the seeds were then brought to Europe and beyond by Spanish and Portuguese explorers in the 1600s.

While Annatto is used in Mexican cooking, a range of other locations include it, using it diversely in their cooking and localized cuisines, often mixed with localized herbs and spices, using different names such countries and areas include:

Annatto is a natural food coloring, giving food a yellow, orange, or red aesthetic. Annatto is ground down to make achiote, the marinade, to add flavor and aroma to meats.

Annatto can be bought in seeds, as paste, infused in oils, ground, or lard. Annatto, before cooking, is orange and red. Annatto is widely available in Latin America and Central America and in Europe, within world food aisles.

Often available in spice bags or vacuumed packed packaging that preserves the spice flavor profile or as part of a spice mix with other complementary spices. When looking for Annatto, remember, the brighter the color, the fresher the Annatto.

Annatto is now widely used on an industrial scale within processed food to substitute synthetic food colorings. It is widely used in America due to its classification as a natural tree-derived food coloring.

So, what’s the difference between Annatto and Achiote?

There isn’t any difference between the two, achiote is the ground version of Annatto, and both terms are widely interchangeable.

Achiote has a very mild flavor, and due to this, when used as a food, coloring doesn’t provide any flavor. When marinated, achiote can be described as peppery, with sweet elements reminiscent of nutmeg and a nutty quality—basing its flavor palette and aroma as warm and earthy, bitter or astringent.

With achiote having a Scoville scale of 40K, which places its heat scale as minimal, sitting between the heat of bell pepper and pepperoncini.

Where to Get Achiote and Annatto?

Mex grocer has everything you could ever want and need. If you have a Mexican or Spanish cooking book that requires specialized ingredients, Mex Grocer is the place to go. They have a range of branded Achiote and Annatto in various forms, including whole, seeded, oil, and powdered into combined spice tins and glass jars. Mex Grocer also has a range of seasoning cubes, rice packets, and crisp and corn snacks which feature achiote or Annatto.

If you’re looking for Annatto seeds to make your achiote, they also sell Annatto in a powder form which gives a flavor with notes of mace and mint. Specializing in the best ingredients to make authentic dishes, Spice Jungle has a range of seasoning, herb mixes, and salts in a range of forms.

Cool Chile Company is all about the flavors and food of Mexico. They sell fresh produce to Mexican food fans in the UK and pastes, seasoning, and store cupboard essentials that you’d find in any Mexican marketplace all over the world.

Their pastes, sauces, salsas, and marinades offer a taste of Mexico without the sourcing of ingredients or time needed to create the moles and marinades you love. They sell vacuum-packed achiote paste, and Maya Hot Chocolate, which features Annatto, allspice, sugar, sea salt, and Tabasqueno cacao beans- using Annatto - just like the Aztecs did!

Products with Annatto in.

How To Use Achiote (Annatto)?

Achiote can be used as a marinade to grill or roast meats such as beef or chicken and Mexico’s famous Cochinita Pipil. (Roasted Pig) Dry rub achiote is recommended for getting color into the meat and encouraging a nutty taste.

A great flavor combination, if at first a little unusual: achiote, oregano, Canela (Mexican cinnamon) and garlic mixed and ground to create a rich and complex tasting paste. This recipe notes achiote as a great paste to have to hand to add an additional level of interest to any meat you have in your fridge.

Adding a marinated achiote dish from Latin America, this recipe can be used on either pork or beef and originates from the Imbabura province in Ecuador. This dish is named after the color that achiote creates on the marinated meat. The marinade also combines beer, garlic, onion, cumin, and oregano. Once again proving how achiote elevates everyday ingredients into extra delicious dishes.

While every state has its version of pulled pork, this dish hails from Puerto Rico but has Aztec heritage. (The Aztecs liked achiote!) Wrapped in banana leaves and cooked in a slow cooker, this recipe shows how to bend the rules of a recipe to be more accessible and doable with what you have in your kitchen. After all, not many of us have a fire pit in our backyard.

Are you looking for a fusion dish or wanting to try something different next Thanksgiving? This Thanksgiving turkey is a Mexican-inspired achiote-based paste paired with citrus to keep the turkey succulent and prevent it from drying during the oven. It’s also a stunning centerpiece for any holiday table, emerging in a bronzed skin with red and orange hues.

For a spiced side dish, try achiote red potatoes and chard for something different from your main. Easy to make and using ingredients you’d find in your kitchen cupboard; this is a dangerously delicious side that might just steal the limelight of the main.

As vegetarian and vegan diets increase in possibility, so do the vegetarian food options. This main dish swaps steak for a cauliflower head steak. This dish could also be made as a side dish and would be a great addition to any potluck. It’s simple, flavourful, and adds great color to any table.

Achiote is easy to prepare: to marinate, dilute 1 oz of paste with 1/2 cup of vinegar or 50 ml of liquid Annatto. This will allow up to 1kg of beef, pork, chicken, or fish to be marinated. It can also be used as a flavor depth in soups and casseroles.

Grind the annatto seeds to make them into the oil. Firstly, heat a cup of oil, add 2oz of annatto seeds, and cook for 5 minutes or until the oil changes color. Strain the oil into a glass bottle and allow it to cool before refrigerating. Use within three months.

Achiote pairs well with vegetarian and meat dishes and is widely used in Latin America to prepare vegetables and flavor and give color to rice and grain dishes.

How to Store Achiote Annatto?

Whether you buy achiote as a block or as a packet spice, Treat achiote the same as you would with any other spice: store in an airtight container, away from direct sunlight for up to three years. If you’re using an oil or lard-infused annatto, use it within six months of purchasing.

How to Make Achiote Paste?

This simple recipe is a great alternative if you’re unable to get hold of pre-made paste. Grind annatto seeds with variations of the following herbs and spices to create an achiote paste to your taste preference.

Add a cup of orange juice or water, garlic cloves, and any additional heat you’d like to add-in. Blend in a food processor for a smooth paste. Taste and add in depending on your desired taste. Once ready, rub into meat or marinade.

For using Achiote paste at a later date, freeze your homemade achiote paste into ice cube trays and add into soups, stews, and rice dishes as and when required.

Here are some delicious Mexican food.

Traditional Mexican barbacoa is cooked slowly for 6-7 hours in a backyard fire pit covered with maguey leaves, to make this laborious dish as simple as...

Mexico has a very sophisticated culture. You can understand it from their unique cuisine as well. One of them is the guacamole, which goes well with any...

Corn esquites have been consumed by Central Americans for hundreds of years. Nowadays, like its cousin elotes, you can mainly find this dish on the menu...

Add all ingredients into a shaker with ice and shake.Strain into a rocks glass over fresh ice.

The Best Chinese Restaurants What appears as simple and authentic Chinese dishes...

What Is Edible Seaweed?

Seaweed is an authentic superfood, and although millions of people already use edible...

How To Cook Corn on the Cob?

Corn is delicious, so why not learn to cook it?Let’s explore the different ways...

There are many diets out there, but none are as interesting as the zodiac diet. We...