Spanish food is colorful and vibrant and instantly recognizable for its comforting traditional feel. Learn about the most famous Spanish food. 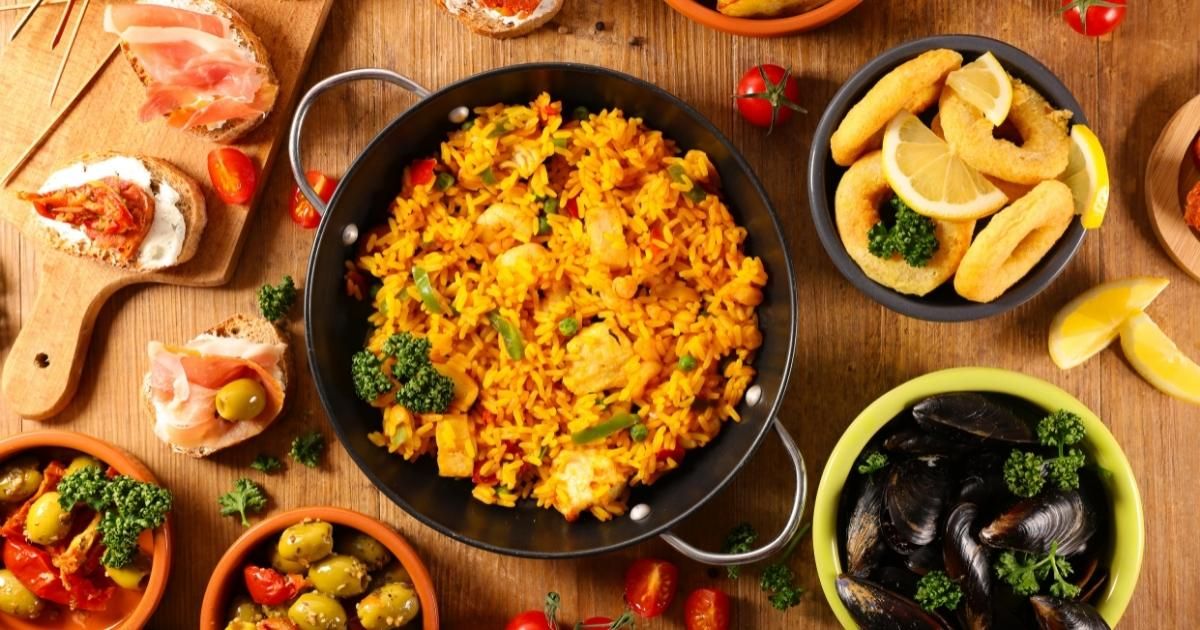 Spain is a beautiful country with deep culinary traditions. Every meal is a celebration in Spain, and the food is genuinely festive! It’s delicious too.

Learn about the most popular Spanish food and see if you’ve tried it all. There’s always room at Spanish tables for you. What is your favorite Spanish food?

What Are Traditional Spanish Foods?

Spain is a large country divided into seventeen autonomous communities, from the sunny Andalucía to hilly Catalonia. And every region has its cuisine and culinary traditions.

These are our favorite Spanish food. We’ve compiled dozens of small plates in our “tapas” selection since we would need to make a longer list to describe the exciting category.

We’re also talking about the famous fava bean stew from Madrid and Galicia’s world-known grilled octopus. We’re also exploring a few lesser-known specialties, such as the pasta version of paella, the fideua, so we hope you’re hungry because this will be a delicious tour around Spain. Let’s start with the country’s famous snacks and appetizers — tapas!

Tapas are not one dish but many. Enjoying small bites before a meal, for lunch, or late in the afternoon is a tradition in Spain, and that’s where tapas come in.

Concisely, tapas are small plates and snacks. Some are cold, like olives, and others are served warm, like “bravas” potatoes. Some are incredibly sophisticated, like butter & garlic-seared shrimp, and others are as straightforward as a few slices of serrano ham. Tapas bring people together and are something nice to eat while drinking with friends and family.

Paella is the most notorious rice dish in the world, and it’s also one of the most exciting, especially for the specialty’s complexity.

People cook traditional paellas in a paella pan on an open flame. Frying the rice and topping it with an immense variety of vegetables and proteins from land and sea make Paella as beautiful as it is delicious. There are several types of Paella, and not all are as fancy, but they’re all meals to share. Can you smell the saffron already?

Grilled octopus is a popular Spanish dish, but it’s not particularly common everywhere in Spain. This is a specialty from Galicia, the “Green corner of Spain.” The region’s proximity to the Atlantic Ocean means that the seafood is always fresh and vastly different from what fishers find on the country’s Mediterranean coast.

Saying fideua is a noodle version of paella is not entirely accurate as they’re different dishes with unique personalities, but it’s a fair comparison. Both dishes are cooked in a shallow pan, but fideua is always made with seafood — it’s a specialty on the Catalan coastline.

Typical fideua recipes also often call for aioli, the creamy emulsion of garlic and olive oil, which gives a distinct mouthfeel to the pasta dish. Not dissimilar to paella, saffron plays an essential role in giving fideua its fragrance and golden color.

Few things are as refreshing and flavorful as the well-known Gazpacho, a cold soup typical in Andalucía, Southern Spain.

Cold soups are common in the warm region, but the tomato-based gazpacho is undoubtedly the most popular. To make it, people blend breadcrumbs, peppers, garlic, onion, tomato and a splash of vinegar with quite a lot of olive oil. The result is a silky cold soup that just tastes like summer. The gazpacho is best enjoyed when it’s hot outside and is a delicious, light lunch.

Locally known as fabada asturiana, this rich stew features white fava beans and relies on the legume for texture and weight, but other ingredients make this stew exciting as well. Bacon, pork belly, chorizo, blood sausages and other meaty treats make the fabada asturiana one hearty dish.

Although the fava bean stew is renowned in Asturias, northern Spain, there are local versions elsewhere. This is no ordinary soup but the main course, and it’s best enjoyed with crusty bread on the side.

Known as croquettes elsewhere, Spanish croquetas are bite-sized dumplings made with flour and mashed potatoes. They’re then breaded and deep-fried for golden bliss balls that taste too good to be true.

The secret behind croquetas is their soft core and crackly crust, but also their filling, as they can contain serrano ham, tuna or cod. Croquetas are often the main course, but they’re also served as a hearty tapa, and you can’t eat just one. Croquetas are one of the most comforting dishes in the world.

For Spain’s most famous desserts, why not start with the crema Catalana? Spain’s version of the French crème brulée might just be older than the better-known Parisian custard — this is Medieval Spanish food!

The crema Catalana contains milk, sugar, flour and eggs. Lemon zest, cinnamon and vanilla are typical flavorings, but what’s most memorable about the dish is the caramelized sugar crust traditionally achieved by burning the sugar with a hot rod. Do you like custardy desserts? Try the crema Catalana.

The cocido madrileño is a prevalent stew in Spain’s capital city, Madrid. Like the fava bean stew mentioned above, the cocido also relies on legume for substance, in this case, chickpeas.

This dish might go back to the Middle Ages, and it has always been an affordable but hearty meal, especially enjoyed in winter. Chickpeas are the main ingredient here, but sausages, vegetables, bacon and chunks of slow-cooked meat give the dish color and flavor.

And not all cocidos are created equal — traditionally, people would add to the pot whatever they had in hand.

Ending on a sweet note, churros are quintessentially Spanish food, although the sugar-coated fried dough is now consumed worldwide.

To make churros, people combine flour, sugar and salt to create a runny dough, which they pipe straight into a pot with hot oil. The result is a golden, elongated rod or “churro” with a crunchy crust and a soft core. Coat them with sugar and cinnamon, and you’ve got a grab-and-go dessert to enjoy at all hours. Amongst all Spanish food items, churros might be the food with the largest fan base.

Creamy Tomato Soup, which will be one of your favorite soups with its creamy, smooth consistency, is a very practical dish. You can prepare it with fresh...

Empanadas are an amazing dish that you can find in many different countries such as Spain, Portugal, Mexico, Argentina, and even the Caribbean. One of...

Crema Catalana, also known as Catalan Cream, is a famous dessert from the Catalonia Region. It is one of the delightful flavors of Spanish cuisine. Cream...

Disney released the official Disney churro recipe, and the internet has been going crazy about it ever since. Especially since it turned out that Disney's...

One of the most important causes of food poisoning is wrong food preservation. If...

How To Make Flax Eggs?

Not everyone can or wants to eat chicken eggs. And when it comes to vegan substitutes,...

Oysters are bivalve mollusks that live in the world’s seas and oceans. Their shell...