How to Make Homemade Beef Barbacoa

Delicious homemade beef barbacoa which allows the slow cooker to do all the hard work, use the tender meat to fill tacos, burritos, enchiladas and more!

Traditional Mexican barbacoa is cooked slowly for 6-7 hours in a backyard fire pit covered with maguey leaves, to make this laborious dish as simple as possible for the modern kitchen we’ve turned to our slow cooker.

A slow cooker is able to recreate the low and slow method of cooking by effortlessly adding all the ingredients to the pot and allow the magic of technology to recreate traditional Mexican cooking techniques.

The addition of dried chillies mimic the smoke from authentic barbacoa which is then heightened with Mexican ingredients such as the flavours of oregano and cumin. In Mexico beef barbacoa is classically served in a tortilla with salsa as street food and comfort food, try it for yourself by following our recipe below. 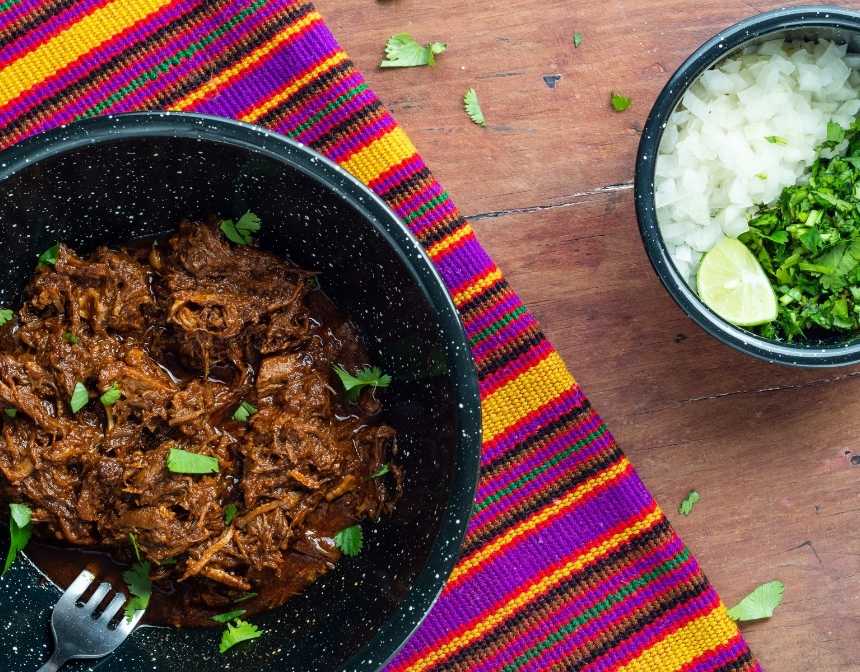 What Kind of Meat is Barbacoa and What Meat Does Chipotle Use for Barbacoa?

As barbacoa refers first to the cooking method of slow roasting, there are many meats that can be cooked in this way. Popular cuts for barbacoa in Mexico include lamb, goat and beef.

Chipotle has brought Mexican food to a wider audience, particularly in the USA, specialising in tacos and Mission burritos. A classic Chipotle filling and spicy option is the beef barbacoa which is made by slowly braising the beef shoulder until tender and juicy.

The fat content of the shoulder keeps the meat moist whilst cooking and flavours the meat to deliver an exceptional taste. While Chipotle barbacoa is delicious we are confident that you will be ever more impressed by our homemade beef barbacoa recipe!

Why is Barbacoa so Greasy?

As barbacoa is slowly cooked over several hours it is important that a fatty cut is used. The fat within the meat gradually renders during cooking which bastes the meat both flavouring and adding moisture to the dish to stop it drying out.

By the end of the cooking process there is often a pool of grease which is similar to the wet Chipotle barbacoa style. A small amount of grease provides the melt in the mouth experience which makes barbacoa so delicious but any excess fat can easily be removed before serving.

What's The Difference Between Barbacoa and Carnitas?

Both barbacoa and carnitas are classic Mexican meat fillings for tacos, tamales, torta, burritos, consomme, enchiladas and quesadillas. The differences between the two dishes are that barbacoa can include many different cuts of meat, which are cooked slowly until tender then shredded.

The traditional maguey leaves, which are unique to barbacoa, flavour and tenderize the meat during cooking by insulating the heat and causing a steamy environment. Whereas carnitas are only ever made from pork, the meat is slowly braised which is similar to barbacoa however at the end of cooking the heat is increased to brown the pork until crispy.

It is believed that the method of barbacoa was invented in the Caribbean by the Taino people. The method has become associated with Mexico due to its popularity, the form of barbecue which makes barbacoa unique traditionally cooks the meat by slowly roasting whilst buried in a pit which is covered by maguey leaves. In northern Mexico and America barbacoa is often the preparation of cows' heads cooked in this style, with the cheeks being a prized cut.

Where Does The Word Barbacoa Come From?

Barbacoa is the Spanish word for ‘barbecue’ and refers to both the cooking method and dish itself. The Spanish word ‘barbacoa’ was first recorded by Gonzalo Fernàndez de Oviedo y Valdés, an explorer and historian who detailed his journey through the New World in a series of books. His 1535 publication mentions barbacoa as a lattice structure made from natural materials with multiple purposes.

One of our favorite steak recipes. The famous chef Gordon Ramsay perhaps is the master...

It's time to pamper your dog with our Homemade Vegetables Dog Food recipe!The best...

Porchetta or Italian Pork Roast is a roasted whole pork. It is a popular street food...

It is a dish of the famous Gaziantep cuisine. This is the most delicious form of...