British food is more exciting than you think. From comforting casseroles to fun street food specialties, there’s a British dish for all occasions. 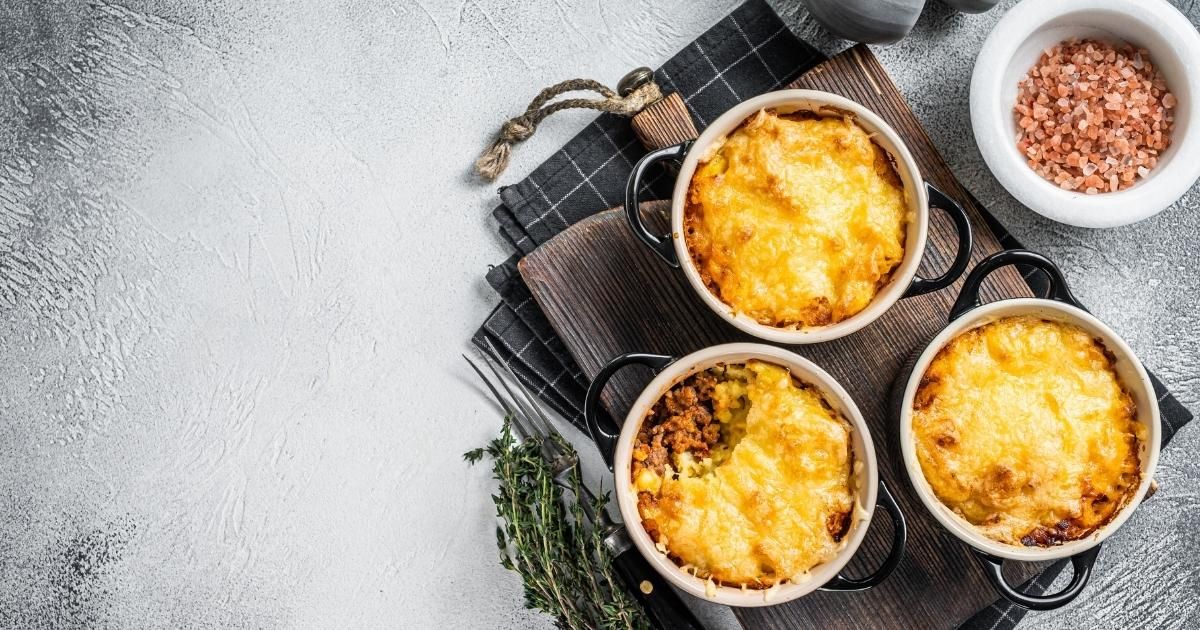 British food doesn’t enjoy a great reputation, as it’s often described as bland. Well, it’s quite the opposite. British food is not only versatile and varied but also delicious!

Here are our favorite traditional British foods for every time and place. There’s a dish to satisfy your every craving.

What Is Traditional British Food?

The UK has deep-rooted culinary traditions. Some go back to the Middle Ages, and others date back to the ancient cultures that inhabited the northern islands thousands of years ago.

Of course, foreign cultures have influenced British food. Indian food is well represented in the country, and other dishes are highly regional —only found in Scotland or Wales, to mention a few.

Although British food varies from town to town, many dishes are recognized nationwide as uniquely British, and they’re excellent ambassadors for the category. These are the most popular British foods.

The ultimate fast-food snack and a lovely lunch or early dinner. Fish and chips are the very definition of fast food done right.

Whitefish filets, often cod, are battered and deep-fried, then served with a side of golden fries chips. The sea-scented specialty is a national treasure in England — there are over 25,000 fish and chip shops across the country!

Needless to say, the secret behind this apparently simple meal is the quality of the fish and the batter, for which most shops have a secret recipe.

These baked goodies are one- or two-bite-sized puddings made with flour, eggs and milk. They’re the ultimate fluffy side dish for everything, especially saucy dishes and gravies that benefit from such a spongy bake.

Of course, plain Yorkshire puddings are only the beginning; people can stuff them with bangers, meaning sausages, for a more elaborate and complete meal. Yorkshire puddings have been a staple in England for at least three hundred years, and their recipe has changed little over time.

Here’s another historic meal and one of the most widespread British foods. The full English breakfast dates back to the 13th century when people offered this complex and complete meal in every household to visitors, especially in pubs and inns.

This dish consists of sausages, bacon, eggs, black pudding, baked beans, mushrooms, tomatoes and toast. It comes with coffee or tea as well. Although variations exist, this is a reasonably standardized dish, and you can order it around the world in major hotels and resorts.

Pies are typical British food, and the most popular is the steak and kidney pie or pudding. Steak, kidney, veggies, seasonings and a savory sauce under a golden crust are as comforting as food gets, and the dish is quite hearty as well!

Typically, diced beef steak and kidney from lambs or pigs are the protein of choice for the pie filling, which becomes deliciously tender in the oven under that crust pastry. This pie goes back to England during the 15th century.

Also known as cottage pie, this savory baked dish is a unique pie that doesn’t rely on a pastry crust. Instead, people top a flavorful minced meat filling with mashed potatoes before baking the pie until golden and fragrant.

This is a typical Scottish dish and was initially made with the week’s leftover meat, usually the meat left at the end of the week. When refrigeration was non-existent, a Sunday meat pie was the best way to ensure no piece of meat went to waste — the pastry was already famous in the 1850s!

Bangers and mash are another excellent example of how much England loves its sausages. This traditional dish consists of sausages served with mashed potatoes and drizzled or bathed with savory onion gravy.

The sausages might vary, since pork, beef and lamb sausages are equally famous in the country. Sausages used to be so juicy that they often burst open while cooking, earning the name of bangers. This is a typical quick meal at pubs, and it’s best enjoyed with a dark ale in hand.

This very traditional and straightforward dish has forever been a typical item on the British table, mainly because it’s easy to make and inexpensive.

We’re talking about the combination of mashed potatoes and shredded cabbage, mixed, seasoned and fried, for an interesting side dish to be served with heartier foods, such as sausages and roasts. Often served as a patty or cake, what makes bubble and squeak unique is its compatibility with other foods!

A toad in a hole is an oversized Yorkshire pudding with sausages, baked and served on a tray or baking dish, with a side of savory onion gravy and veggies.

This complete meal is uncomplicated, but simple in a good way. For starters, sausages in the UK are of the highest quality, and when added to a homemade pudding-like batter, the result is unavoidable pleasing. This dish might go back to the mid-1700s, and it has been forever popular for being a quick and inexpensive meal.

Haggis are an unusual British food. They’re essentially a savory pudding made of ground offal, including a sheep’s heart, liver and lungs, seasoned and encased in a stomach. Of course, this doesn’t sound like the tastiest of meals for the inexperienced, but it is.

Haggis are beautifully seasoned; they’re meaty, savory and flavorful. Besides, haggis tenderize nicely after a slow cooking process — so much you can cut them with a fork alone. This is a Scottish specialty and not entirely popular in the rest of the UK, but it’s still typical British food to know and try at least once.

Interestingly, the most popular meal in the UK is Chicken Tikka Masala, a uniquely Indian-inspired dish that’s more British than Indian.

This dish consists of marinated chicken, diced into chunks and served with a spicy curry sauce. The orange-colored dish might contain yogurt or coconut cream and tomato. What all versions have in common is a unique yellow color, proper curries heavy on turmeric and paprika. Some sources suggest immigrants created the first chicken tikka masala in Glasgow, but it’s hard to tell.

This iconic crispy fish and chips recipe takes only 15 minutes to make from scratch and cements its place as a family favorite due to its light crispy...

It is salted pastry from British cuisine. It can be served alongside many dishes.

Simple comfort food, there is good reason that shepherd’s pie is a classic dish. Lamb mince is simmered in a thick gravy with chopped onion, carrot and...

One of our favorite steak recipes. The famous chef Gordon Ramsay perhaps is the master of this delicious recipe and we recommend watching him do it before...

This traditional bread pudding recipe is a must-have in the recipe repertoire of anyone enthusiastic about minimizing food waste. The easy bread pudding...

The British must know the taste of his mouth. Desserts, which are among the most popular varieties of English cuisine, clearly reveal this. These unique...