Shepherd’s pie, a rich meaty lamb casserole which is encased in a layer of mashed potato, baked until golden brown and bubbling.

Simple comfort food, there is good reason that shepherd’s pie is a classic dish. Lamb mince is simmered in a thick gravy with chopped onion, carrot and celery then transferred to a baking dish and generously topped with luxurious mashed potato. Bake the shepherd’s pie in the oven at a medium heat to bring the flavors together and develop a golden topped crust. Serve our shepherd’s pie recipe as a hearty midweek meal to please the whole family. 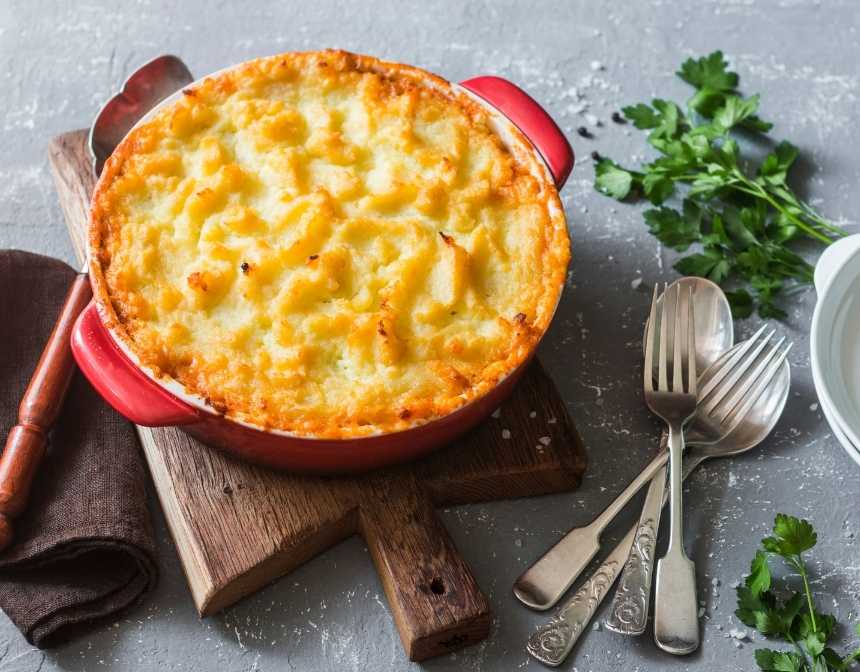 Why is it called shepherd’s pie?

Shepherd’s pie contains meat from lamb or mutton and so the word ‘shepherd’ refers to the person who tends to the sheep. Commonly in America dishes will still be served as ‘shepherd's pie’ but in fact contain ground beef as the meat is favoured throughout the country. Vegan and vegetarian meat-free versions of the dish are often called ‘shepherdless pie’.

Where does shepherd’s pie come from?

Shepherd’s pie originates in Britain from northern England and Scotland. Sheep are a common livestock and can be found grazing throughout the British countryside, as a result there are many regional variations with the most popular being Irish and English.

There is a French version of shepherd’s pie named ‘hachis parmentier’ which is recorded shortly after the documentation of the British version.

The invention of shepherd’s pie is believed to have been a method for housewives to use up leftover roasted meats. Originally this could be any meat which was finely chopped by hand, with a layer of mashed potato in the base of the pie dish, a layer of meat filling then topped with a second layer of mashed potato and baked in the oven. Over time the name shepherd’s pie became used to distinguish the lamb within the dish.

What is the difference between shepherd’s pie and cottage pie?

Both dishes are very similar in ingredients and cooking methods with the main difference being that shepherd’s pie contains lamb/mutton while cottage pie contains beef. Following the introduction of potatoes to Britain the ingredient became an affordable food source and led to the creation of cottage pie.

The name cottage pie refers to the cottages which the poorer British people lived in and could contain any leftover meats. The name shepherd’s pie came into use later to specify that the dish contained lamb. Our recipe can be recreated using beef mince and produce a classic cottage pie which is just as delicious. Another variation of the dish is ‘Cumberland pie’ which tops the mashed potato with cheese and breadcrumb for a rich, textured crust.

What to serve with shepherd’s pie?

Shepherd’s pie is a whole meal within itself, providing starch, meat, vegetables and sauce all within the dish. To balance the richness of the dish a light side salad would be a welcome addition or boiled green vegetables such as peas, mange tout, cabbage and kale.

Frequently carrots and peas are added to the base with the lamb meat so there is no need for extra vegetables. In Britain many people enjoy their shepherd’s pie served with HP sauce or tomato ketchup.

A delicious recipe from Asian cuisine: Chicken Fried Rice! This hearty and protein-packed...

Green Curry Chicken is one of the most popular dishes in Thai cuisine. Although green...

Preheat the broiler. Lightly oil the broiler pan. Toss the carrots with 1 tablespoon...

This dinner, which will turn your dinner into a feast, is both light and delicious....

This classic goulash recipe yields a hearty cross between a soup and stew that is...

Who doesn’t love Nando’s peri peri chicken? It’s spicy, garlicky, and has that...