A perfect dessert recipe with a warm apple and cinnamon filling and a crunchy top: Apple Crumble. This delicious and easy-to-make English dessert will blow your mind with its oat and oat-free versions.

The British must know the taste of his mouth. Desserts, which are among the most popular varieties of English cuisine, clearly reveal this. These unique tastes accompanying their five teas leave a wonderful taste on the palates and their recipes are applied in all world cuisines. Here is one of these wonderful desserts we are talking about, Apple Crumble.

Quite popular as its oatmeal version, Apple Crisp, this wonderful dessert has a rather simple texture and preparation. Here is our Apple Crumble recipe that you can easily apply at your home. All members of the house will be very pleased with this recipe. Bon Appetit! 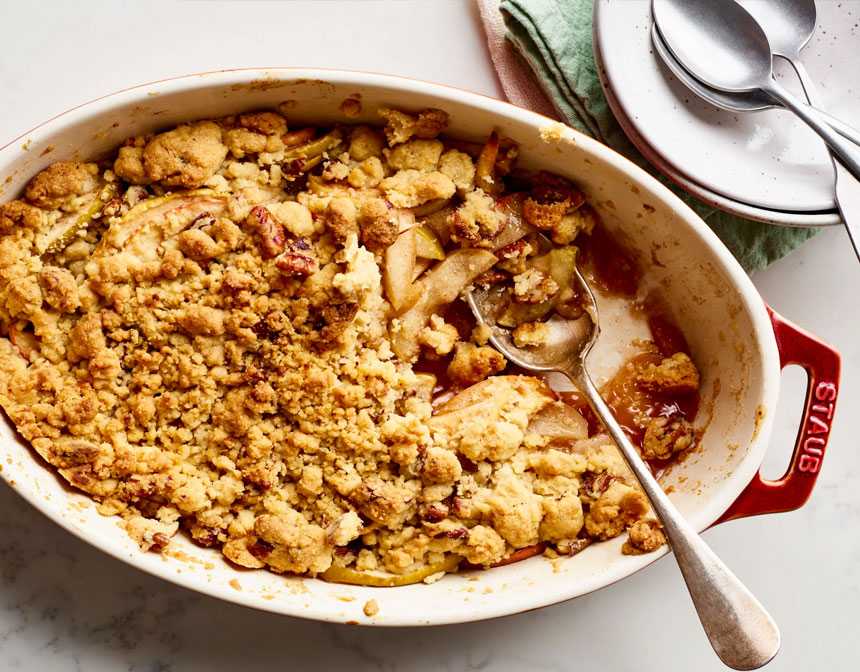 Photo By The Kitchn
Rate This Recipe

Crumble is a historical dessert that appeared in Britain during World War II. It is also seen as a simplified version of an extravagant dessert like Apple Pie. Known as Crumble in England, this desserts is also called Crisp in some states of the United States. Apple Crumble is served with cream, custard or ice cream in some countries.

What Is The Difference Between Apple Crisp and Apple Crumble?

Apple Crumble is made in the UK and Australia similarly to the Apple Crisp. However, these two recipes are different in Canada and the USA. Both recipes use fresh fruits and are apple-based desserts.

What Apples Are Best For Apple Crumble?

We can divide apple varieties into those for food and for cooking. Baking apples will be the ideal choice in this recipe. Apples used in dessert should be hard textured. Granny Smith, Honeycrisp, Gala and Pink Lady apples are among the apple varieties you can use in the Easy Apple Crumble recipe. Be careful not to use red apples. This can cause a sour taste.

How To Make The Best Apple Crumble?

When making apple crumble, use apple, cinnamon and powdered sugar for apple filling; and use all-purpose flour, powdered sugar and butter for the toppings.

How To Store Apple Crumble?

Do You Put Crumble In The Fridge? Yes. You can store the Apple Crumble dessert by wrapping it with foil. You can keep it in the fridge for 2-3 days.

Can You Freeze Crumble? Yes. You can put the apple pie in the refrigerator bag or plastic wrap and keep it in the freezer for 3-4 months.

Molasses muffins are the perfect snack for breakfast. These muffins, which will be...

Chocolate-peanut butter no bake cookies have been a staple in many American households...

Cannoli is an Italian dish. One of the most served dishes at the bakeries of Italy,...

Make tea/coffee times special with these scones that you can serve with jam or cream....

Oatmeal Pudding is an easy breakfast or snack that is gluten-free and rich in fiber....

These bakery style blueberry muffins are just so healthy and delicious, you can’t...

The Best Ice Cream Shops in The US