When it comes to food, Europe has deep roots. Learn all about the best traditional European food. Food that you have to try at least once in your lifetime. 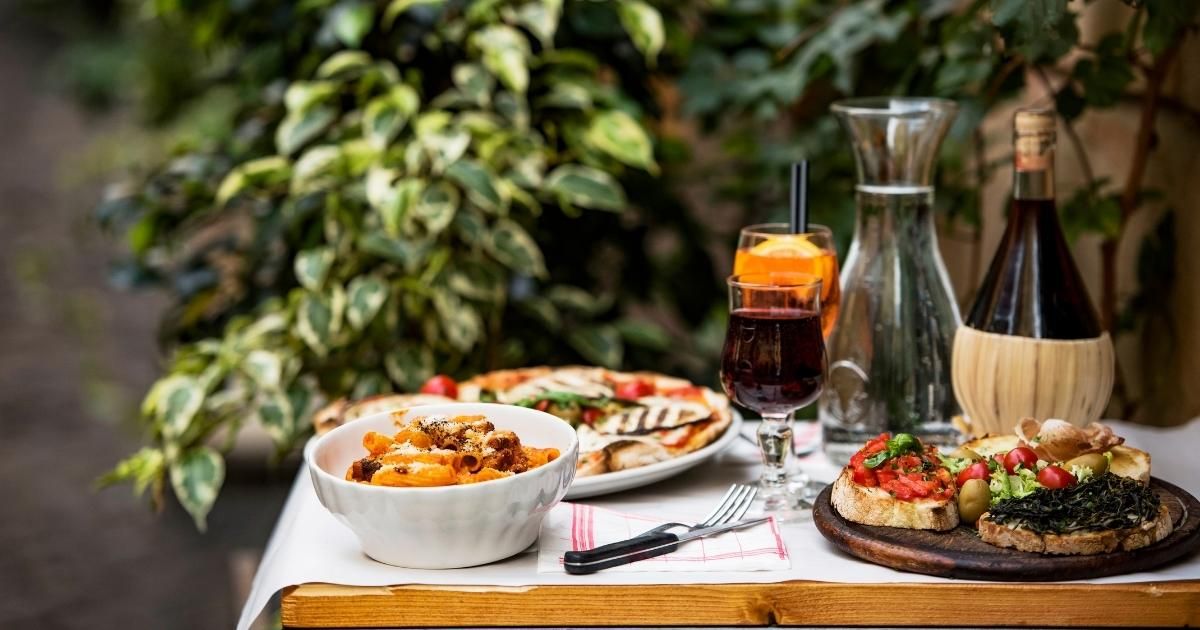 European food is incredibly diverse, and it influences everything we know today. There’s no doubt traditional European food shaped the way we eat. Now, learn all about it.

From pasta to tapas and from sausages to duck confit, there’s something for everyone on the European menu, especially if you look into traditional European food.

What Are The 10 Most Popular European Dishes?

European food varies widely. Incredibly, such a small continent has an immense diversity! From seafood to sausages, and from street food to sophisticated dishes, these are the 10 most popular European dishes.

Paella is the king of rice dishes. Scented with saffron and hosting a wide variety of veggies, chicken, pork and seafood, paella can have as many flavors as the cook wants and it’s always in perfect harmony.

We love this traditional European food because you need a special pan to make it, and you must cook paella over an open flame. Besides, paellas can feed large crowds, and everyone always wants to have doubles. Paella is originally from Valencia, on Spain’s Mediterranean coast, and it’s one of the most flavorful and colorful dishes on the continent.

Of course, we can’t make a list of traditional European food without mentioning the most popular food item in the world. Really, there are more pizzerias worldwide than any other type of restaurant.

The real deal, though, comes from Naples, in Central Italy. Here, pizza is a religion, and forget about those thick, bready crusts, real pizza is thin and bubbly, and it must be made in wood-fired ovens — there’s no other way. If there’s a traditional European food everyone has tried at least once, that’s the pizza.

This quintessential Mediterranean seafood stew is called bouillabaisse, and it has been a popular dish in Southern France since the 18th century. Fishermen arrived at the sunny shore with the daily catch, and people would throw everything in the same pot to make a wholesome stew.

Scorpionfish, red mullet, skate, eel and even lobster make their way to this soup flavored with saffron and premium olive oil. This is no ordinary fish soup. It has been perfected for generations, and it’s one of the most exclusive dishes in Europe.

Choucroute is a specialty in Alsace, France, and it’s remarkably similar to the German sauerkraut. We’re talking about fermented cabbage, and it’s addictive!

The best version of the tangy veggie is choucroute garnie, a combination of cabbage, sausages, potatoes, bacon and a few other maty treats. What you get is a hearty and wholesome meal that will keep you warm even on the chilliest of evenings. This typical winter meal has no equal anywhere in the world, and it’s uniquely European — it just has an old-world feel.

Snails might not sound all that appetizing, but they are. Sautéed in butter with garlic, wine and aromatic herbs, these meaty snails are a delight and a popular French appetizer.

Escargots are not cooked in their shells; they’re purged and extracted before cooking, although they’re served back in their shells for presentation. To eat escargot, you need special utensils, including a small fork and tongs, making it quite an experience. The flavor, though, is hard to match. And no, escargots are not slimy at all. You’ll have to try them to believe it!

There are more types of risotto than you can imagine, and they all come from Northern Italy. The creamy and tender rice dish cooked with butter, olive oil and wine goes back to the Middle Ages, but it’s still one of the most sophisticated dishes in the world.

You’ll find risotto in Lombardy, Veneto and Piedmont, and no two risottos are the same. Making use of seasonal ingredients makes every risotto unique. The rice dish is a blank canvas for creativity, and that’s why we love it!

There are around 1,500 types of sausages in Germany, and that alone is impressive! The cold European country loves its links. What makes this category so exciting is that there’s a sausage for every time of year and occasion.

Bratwursts are meaty and fatty, bratwursts have an intense flavor, and frankfurters are formidable with a cold beer. Light and dark, spicy and fatty. There’s undoubtedly a German sausage to win your heart. The best part? These are often made artisanally by masters of their craft, so you always get great quality.

Borscht is a vegetable soup, but it’s more than that. The popular Ukrainian specialty is based on a rich beef stock, and it contains a wide variety of vegetables, including fermented beetroot. Somewhat sweet and tangy but primarily savory, a bowl of borscht has one of the most complex flavors in the world.

This attractive soup is typical in every country in Eastern Europe, and it’s commonly served on special occasions. There’s no doubt this famous soup deserves a spot on the top ten list for traditional European food.

Fried to golden perfection, this Sicilian dessert comprises crispy tubes made of dough, often filled with creamy sweetened ricotta, pistachios and other goodies. The cannoli is an Italian dessert, but it was created during Sicily’s Arab rule — it soon became a specialty in the Mediterranean Island.

This attractively crunchy dessert makes our list because it has gained international fame. Today you can enjoy cannoli in any respected Italian bakery worldwide, and that’s saying something. Besides, it only takes one bite of cannoli to make you fall in love with the dessert.

Sometimes the simplest recipes are the best, and that’s precisely the case with the Russian blini. These delicate, small pancakes might not look like much, but they’re buttery and incredibly tender — they practically melt in your mouth.

What makes blini different from most other pancakes is yeast, which makes them puffier. Of course, blinis are best enjoyed when topped with creme fraiche and caviar, two items that complete the dish for one of the most exciting traditional European foods. Blinis are ancient, but they’re timeless classics.

The slight acidity of the tomatoes and the salty and savory mozzarella in this Homemade Neapolitan Pizza are an absolute delight to the taste buds. The...

Cannoli is an Italian dish. One of the most served dishes at the bakeries of Italy, a perfect starter for your day. It is simply one dish that is luscious...

When it comes to Risotto then what we get in our mind is a creamy dish that is delightfully delicious. Risotto is one of the best Italian rice dishes but...

Blini (also referred to as bliny or blin) is a very famous breakfast dish in Russia and Ukraine. At breakfast, if you want a different style pancake for...

As far as German fried food goes, bratwurst is the most popular. These distinctive German sausages are made with finely ground pork or beef and seasoned...

Check out our other posts about European Dishes:

Wheatgrass is self-explanatory; it is the young shoot that later produces wheat....

If you put too much salt while cooking your food, here are some tips to save the...

What’s The Difference Between Yuca and Yucca?

Concisely, the difference between yuca and yucca is this: One is a root veggie, and...