There are a huge number of different flours out there, so how can you make sure you’re picking the right one for your kitchen? 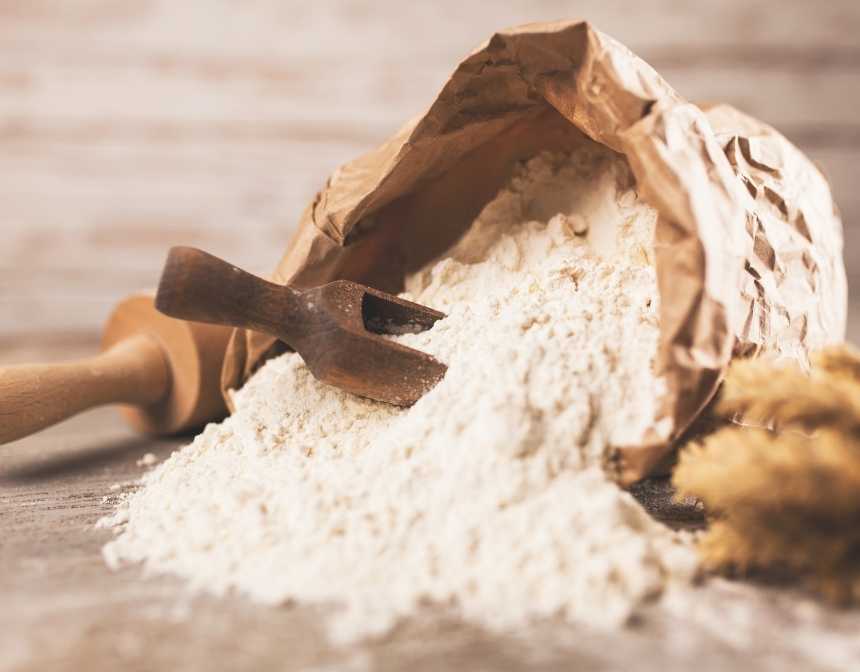 We’ve all been there in the grocery store: looking at all the different flours that are on offer and wondering what really makes any of them different from one another. For the vast majority of people, our knowledge of flour lies somewhere between ‘it’s usually made from wheat’ to ‘there’s gluten in it’.

Well, both of those things are true, alongside a whole host of other facts as well. In this article, we’re going to be discussing different types of flours, and what separates them from each other.

What Are The Types Of Flour?

All Purpose Flour: Also known as a White Flour. It is obtained by processing hard wheat and soft wheat. It has a moderate protein content in the range of 10-12 percent. It can be used for making bread, cookies, cakes and pancakes.

Bread Flour: It has 12-14 percent protein (gluten) content. It is produced entirely from hard wheat. It is especially used in yeast bread making. It can also be preferred for making bagel and pizza dough.

Cake Flour: It is a type of flour with the lowest gluten ratio among all flours. Its protein content is between 6-8 percent. It is finely ground and starchy. It is preferred for making soft and moist cakes and other bakery products. It absorbs liquid and sugar better than multi-purpose flour. This adds texture to cakes and pastries.

Pastry Flour: It has a higher gluten ratio than cake flour. It is among cake flour and all-purpose flour with 8-9 percent protein content. It is made from soft wheat. It has a high starch rate. It can be used for making pies, cookies, biscuits and cakes.

Self-Rising Flour: The feature that makes this white flour different is that baking powder and salt are added during its grinding. It is obtained from low protein wheat. It is used in making pancakes, biscuits and donuts. It should not be used as a substitute for other flours. You can also make this flour at home by adding baking powder and salt to cake flour.

White Whole Wheat Flour: It is obtained from hard white wheat. It has the same protein content as whole wheat (13-14%). It is a slightly sweeter flour. It can be used for making bread, cakes and cookies.

Gluten-Free Flour: Gluten-free flour can be made with ingredients such as rice, corn, potatoes, tapioca, buckwheat, quinoa. Almond flour, buckwheat flour, sorghum flour, oat flour, coconut flour are among gluten-free flours. It can be used for making cakes, breads and pancakes like other types of flour.

Semolina Flour: It is obtained by grounding the twice-milled semolina wheat. It has coarse grains. It is high in protein. It is frequently used in Italian pasta and pizza dough. It can also be preferred for making semolina bread.

French T55 Flour: This flour is ideal for making french baguettes. It has a fine airy texture and made of 100% French wheat. Buy French T55 Flour on Amazon.

What Type of Flour Is The Best?

Annoyingly, this is a question that’s quite hard to answer. Really, it comes down to what you’re making. Based upon the desired consistency that you’re aiming for, you’ll be able to select a flour. To make that choice, you’ll need to bear two things in mind: gluten and additives.

Having flour in your kitchen that has a low gluten content means that you’ll be able to make perfectly soft bakes. Cake flour, for example, has a very low gluten content, as it has a protein content of five to eight percent. This means that little gluten will develop during mixing and baking, leading to a light, soft end product.

A step up from that protein level is flours which have a protein content of between eight and nine percent. These flours are typically marked as ‘pastry flours’, and can make bakes with a medium gluten level, leading to a final consistency that is partly flaky, and partly tender. Interestingly, you can make pastry flour at home by combining 1 ⅓ cups of AP flour, and ⅔ cup of cake flour.

Somewhere in the middle of that scale sits all-purpose (AP) flour. It is milled from both hard and soft wheat and is very versatile due to its resilient gluten level. Bread made with AP flour will typically be very light, while cakes may be a little denser.

While gluten is an inherent part of any grain-based flour, you can also buy flour and flour mixes that have certain things added to them. For example, you’ve certainly seen self-rising flour on the shelves of your grocery store. That is simply flour (typically all-purpose) which has had salt and baking powder added. The addition of baking powder means that your baked goods will rise effortlessly in the oven.

What Are The Differences Between All Purpose Flour And Whole Wheat Flour?

Which Flour Makes The Best Bread?

Unsurprisingly, bread flour is the best for making bread. There are sometimes different variations of bread flour within the overarching category, but they’re typically matters of taste. For example, will you be making whole wheat bread or white bread? Both types of flour will likely be available.

To make the best bread you can, aim for a flour that has a very high protein content - twelve to fourteen percent. This gluten will develop as you knead, resulting in an ideal loaf of bread.

Which Flour Is Best For Diabetes?

Diabetic people need to watch out for the number of sugars in their diet. This means that sugars that would be produced from the carbs in flour during digestion also need to be monitored.

Without a doubt, the best flour for diabetic people is almond flour. It has a very high protein content, and it also has a very low effect on blood sugar. Furthermore, this potential bread flour substitute is very versatile and can be used for any number of both sweet and savory recipes.

What Are Strong Flours?

The relative strength of flour is an indication of the amount of gluten present in it. Typically, strong flours are made exclusively from hard wheat varieties, leading to exceptionally high gluten content. This gluten level gives the dough great elasticity, and also allows the bread to rise well.

What Is The Best Flour for Pizza Dough?

This is a topic that’s up for a lot of debate. Culinary circles often go back on forth on what makes good pizza dough, and the answer is very subjective.

Generally speaking, however, pizza doughs are the best when they’re quite chewy and tearable. This means that you’re looking for flour that has a high gluten content. We’d recommend checking out the bread flours at your local supermarket and picking one up with a protein content of twelve to fourteen percent.

Does The Brand of Flour Matter?

Well, yes and no, annoyingly. The composition of the flour is what’s important in making a certain bread, pizza dough, or cake. That’s what you need to keep an eye out for in the supermarket and as such, bear what we said above in mind.

However, the best way to ensure the composition of the flour you’re using remains the same between different bakes is to use the same brand of flour. While there are no proprietary blends of flour, companies tend to find a recipe they like and stick with it. Therefore, consistently using the same brand will likely give you consistent results.

On the flip side of that coin, you may find that a very cheap flour is just as good in your kitchen as a very expensive one, or even better! We’ve found a lot of success in using cheaper flours, so it’s worth considering trying out a few and finding which one you like.

Here are some recipes with Flour

Warm pastries out of the oven… The taste of these puffy and soft pastries is simply amazing. You can make these easily at home, with any filling you...

A simple fritter which is popular throughout the world and can be found in many variations. The popularisation of bunuelos is thanks to the versatility...

They are known for baking some of the best classic American desserts from their famous cupcakes to pies and cookies to specialty cakes.These cupcakes are...

Chicken Piccata or Lemon Chicken is one of the delicious dishes of Italian-American cuisine. Chicken breast dipped in flour is fried and cooked with caper...

It is a soup made with yogurt. However, it can also be prepared with tomato paste or bulgur. It can also be made without meat. This delicious and filling...

Enjoying a hearty and healthy breakfast is a great way to be active all day. There’s...

Tortas are unique sandwiches or subs, commonly found in Mexico as a quick, easy,...