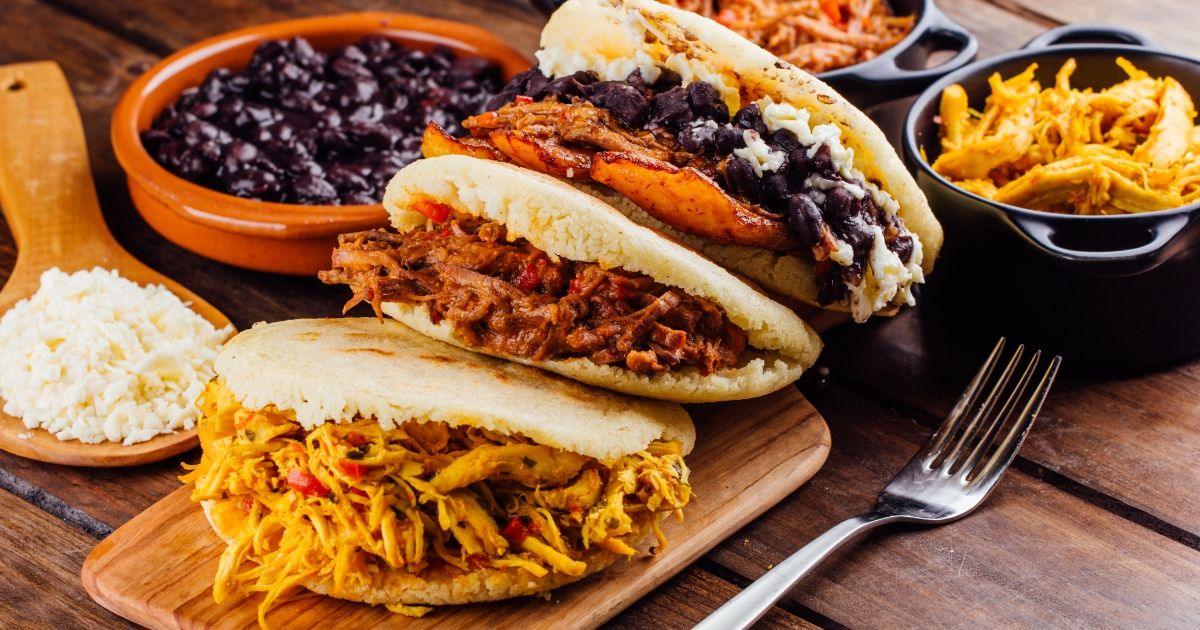 South American food might be the most varied in the world, with many local specialties and international classics. There’s something for everyone at the South American table.

The best part about South American food is that there is so much to choose from! There are food options suitable for all tastes and diets. Here is a list of traditional South American dishes.

What Are The Traditional South American Food?

Lomo Saltado is a typical Peruvian dish with pan-fried beef, white rice and potatoes. This is one of those dishes everyone knows in the country and often enjoys — comfort food in its most significant expression. Beef was once rare in Peru, so it’s easy to see why this dish soon became everyone’s favorite.

Lomo means loin, and the term saltado refers to sautéing. Onion, tomatoes and yellow peppers give color to this heartwarming dish, beautifully seasoned with local herbs and spices and contrasted with fluffy white rice.

Arepas are flat pancake-like bread made with cornmeal water. The tender bread is traditional in Bolivia, Colombia and Venezuela. And although enjoying arepas on their own is typical, they show their best when filled with a wide variety of ingredients.

There are at least 100 arepa recipes. Most of the time, the filling determines the type of arepa, but there are also arepas made with other ingredients, including yuca, lentils, and more. Arepas are uncontested in Venezuela, where people eat them every day. The bread’s versatility makes it easy to enjoy differently every time!

Bandeja Paisa is Colombia’s flagship dish, and it’s the South American version of a typical English breakfast, where proteins, legumes and starches share the plate.

Bandeja means platter, so imagine this is a wholesome and hearty dish. Beans, plantains, minced meat, avocado, eggs, rice, arepas and chorizo are typical in a bandeja paisa, served on the same plate.

The hogao sauce, based on tomatoes and onion, brings all the ingredients together, each adding its own flavor, color and texture to the dish.

All countries have their own version of the asado. Call it grilled meat, barbecue or asado; it’s all similar — meat cooked on an open flame in a grill. Still, a few South American countries, especially Argentina, Uruguay and Brazil, have strong grilling traditions and a love for big chunks of meat.

Beef, pork, goat, lamb, sausages, chicken or fish. Everything tastes better when kissed by smoke and fire, and that means variations exist. South America is heaven for meat lovers, and cooking around the grill is always more than a meal — it’s a party.

Also spelled cebiche, this is the best-known Peruvian dish; it’s also popular in Chile, Colombia, Costa Rica, Ecuador and all the way up to Mexico.

What all ceviche has in common are its primary ingredients, raw fish “cooked” in citrus juice and tossed with veggies, whether lettuce, onion, cilantro or even corn. Sour orange juice has always been the right way to cook fish for ceviche, but lime is now equally common. Some ceviches are spicy, and others mild; some are made with fish and others with shrimp, octopus or any other seafood.

Milanesas are common in South America. These are thin cutlets of chicken or veal, breaded and fried and served with rice, potatoes or salad. The name comes from the Italian cotoletta alla Milanese, a typical dish in Milan. It is believed to have arrived in South America with the many European immigrants of the 19th and 20th centuries.

Not dissimilar to a Japanese tonkatsu or a German schnitzel, milanesas are comforting and familiar. Sometimes, milanesas are served with tomato sauce or a creamy white sauce.

Rice and beans are typical in Mexico, the Caribbean and South America. Beans are initially from the American continent, but rice arrived with the first Europeans. Together they offer an inexpensive, filling and complete meal.

Every country in South America has at least one version of rice and beans. Some are saucy and others meaty, but they all taste like home. Most importantly, the combination of legumes and rice is unique to the continent, and it’s now seen as a healthy way of eating for its compatibility with almost all diets.

Ending with something sweet, nothing says South American food like dulce de leche. To make this golden-brown and thick sauce, one must cook sweetened condensed milk until rich, thick and slightly burnt.

Dulce de leche is a typical filling for the famous alfajores or South American cookie sandwiches, but people make cakes and ice cream with the caramelly delight, too. Dulce de leche comes in different sweetness and thickness levels, as it is almost always made artisanally. And although you can eat dulce de leche by the spoonful, it often becomes some of the continent’s most sophisticated desserts.

Talking about beans, the feijoada is one of the most famous legume dishes in the world. Championed in Brazil and taken across the ocean to Portugal and other countries, this meaty dish is the perfect combination of animal- and plant-based proteins.

Pork and beans come to life in Brazil’s homes, where they’re often prepared at least once a week. Although the feijoada has a dark past, as it is linked with the slave trade of the colonies, today, the dish is celebrated as a national dish.

The final rice dish on our list is a sweet one. To make this creamy rice pudding, people in South America cook the rice in milk and sweeten it with cane sugar. Vanilla and cinnamon are typical flavorings, although some prefer to add a touch of citrus to theirs with zest.

Of course, not all arroz con leche is the same, and there are different varieties in South America. Some desserts are tough and chewy, while others are silky smooth. Still, they're all delicious.

Peruvian cuisine is on the rise in the United States. It makes sense too since many Peruvian dishes combine different flavors from those that have settled...

Arepas from Colombian and Venezuelan cuisines are cornmeal cakes that have a crispy surface and a fluffy inside. It is well-known among those who love...

Ceviche is a classic South American dish. It is usually served as an appetizer. It is prepared with raw fish or shrimp. This recipe, which is fresh and...

A simple fritter which is popular throughout the world and can be found in many variations. The popularisation of bunuelos is thanks to the versatility...

South American desserts are some of the easiest and best in the line. And Peach cobbler cake is no doubt a serious candidate among them. It is super easy...

Tostones are salty and crunchy, twice fried green banana slices. It is one of the most popular snacks in Latin American cuisine. This delicious recipe,...

Mussels are magnificent mollusks that come from a wide variety of different spots...