Baked Alaska is a sweet, creamy dessert delight that always boosts your dopamine rush. You might think that it's a little difficult to prepare this retro-style dessert at home but you will be amazed to know that it's easy to make.

Baked Alaska, also known as omelet norvegienne, omelet surprise, or omelet siberienne in different parts of the world is a delicious old-school dessert that is a perfect combination of cold creamy ice cream and hot foamy meringue. This contains a layer of sponge cake, an ice cream layer and finally, the whole dessert is covered with shiny meringue that is toasted with a kitchen torch to make it light brown.

You can create this magical dessert in your home, using your basic kitchen equipment. Here in this article, we will learn how you can easily prepare the best Baked Alaska by using few common ingredients and little patience. 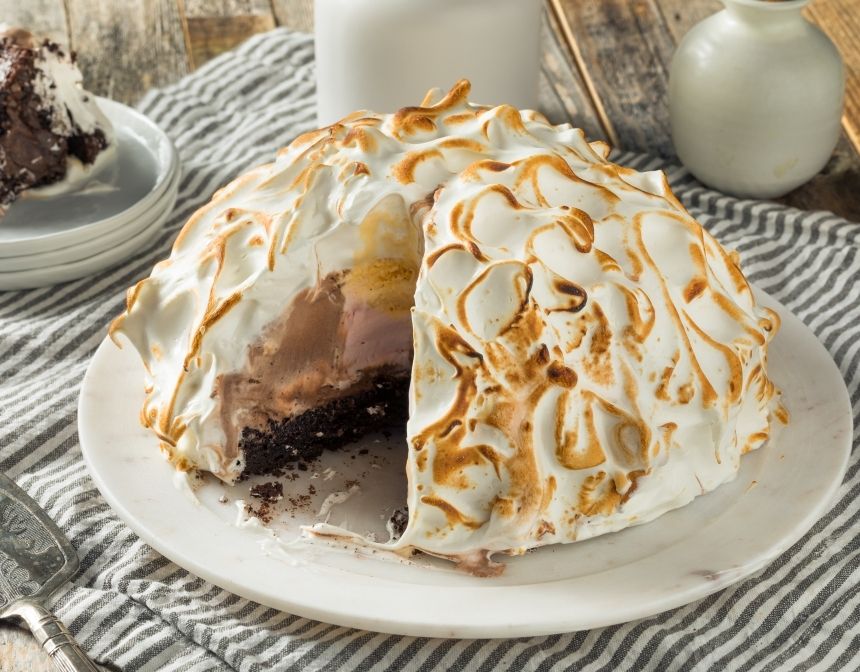 What Is Baked Alaska?

Baked Alaska is a delicious old-school French dessert. The dish has a soft sponge cake base and meringue toppings with an ice cream layer in the middle. This meringue dessert filled with ice cream is warmed up and served hot.

The most interesting fact about a classic Baked Alaska is that though the entire dessert is placed in a hot oven for 3-4 mins, still, the ice cream doesn't melt, which makes the dish more magical.

However, this retro-style fancy Baked Alaska dessert was first created by famous French chef de cuisine Antoine Alciatore in 1867. From then to now this is considered as one of the finest desserts of all time.

How To Make Classic Baked Alaska?

Classic Baked Alaska is prepared by placing an ice cream layer on a sponge cake base and then covering the whole dessert with a thick layer of meringue. And, lastly, the whole dessert is heated for 3-4 minutes into an oven for turning out the meringue light brown.

How Does Ice Cream Not Melt in Baked Alaska?

Baked Alaska has a sponge cake base and this cake contains a lot of air. The air acts as a thermal insulator as it is a poor conductor of heat. Also, the top of the ice cream is covered with meringue in this dessert.

That is why while baking baked Alaska into the oven, the ice cream layer is insulated by both the meringue and the sponge cake and so that the heat from the oven does not get enough time to reach that ice cream layer.

What To Serve With Baked Alaska?

Baked Alaska is a creamy and delicious retro-style dessert. This is mainly served with the main course or more specifically with a healthy seafood dinner. Some people also like to have it with different types of white or red wine.

Here are some of our main courses recipes that you can serve with Baked Alaska:

What Are The Recipe Variations of Baked Alaska?

Whether it's about flavor, texture, or appearance, baked Alaska has lots of variation and one can always be more creative with it. However, the most famous variation of this amazing dessert is Bombe Alaska and Flame on the iceberg.

In the preparation process of bomb Alaska, some dark rum is to be spread over baked Alaska and while serving the whole dessert is covered with Flame.

In this dessert, there is an ice cream ball in the middle of a sponge cake and the top of it is covered with cream. While serving whisky and syrup is poured on the top and the ice cream ball is to be set alight.

Papanasi is a fruity dessert prepared by frying or boiling. It is a recipe specific...

One of the classic dishes is an elegant dish filled with the luscious and exquisite...

Practical, hygienic and delicious cream that you can prepare yourself at home. You...

It is a classic dessert that belongs to the French cuisine. The perfect harmony of...

This retro dessert used to be a staple in every kid’s lunch box during the ’90s...