Vanilla Extract: How to Make It & Substitutes

Vanilla extract is an amazing ingredient that boosts any bakes to the stratosphere, but what is it, and what do you need to know? 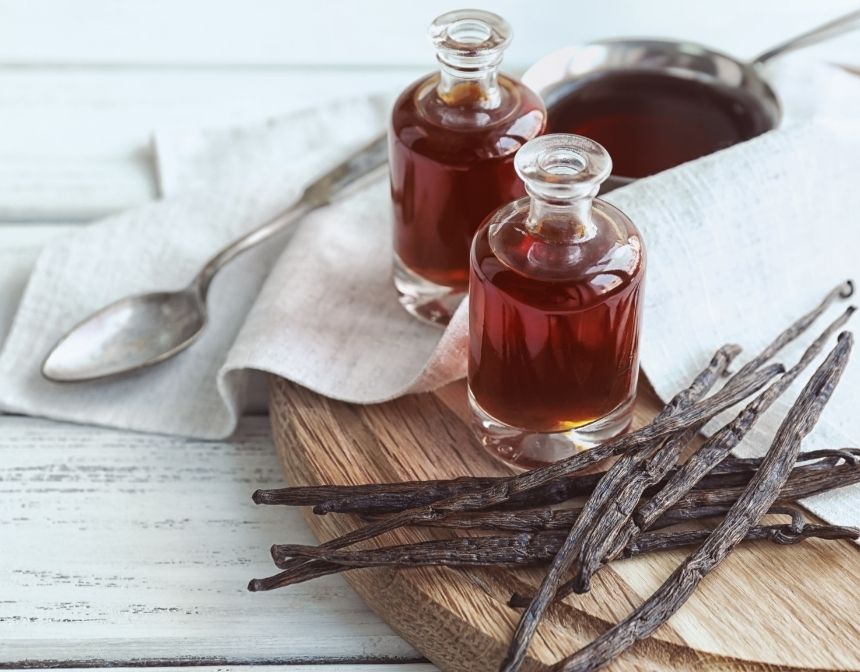 Most of us have memories of those tiny bottles of vanilla extract which looked so tempting in our parents’ and grandparents’ kitchens. When cooking and baking with it, a number of us likely tried to sneak some away from the counter, since the smell was so tempting.

There are a lot of things that go into the manufacture of vanilla extract, and it’s a truly wonderful process that’s worth knowing about for any baker or chef out there. So, read on to find out everything that you might need to know about vanilla extract!

If you’re a baker, there’s a fighting chance that you’ve stumbled across a fair few recipes in your time which have called for vanilla extract. Typically, it’s used in extremely small amounts to enhance flavor rather than provide a vanilla flavor in its own right.

When you’re shopping for vanilla extract, you’ll see products labeled as either pure vanilla extract or as vanilla essence. The second of the two is also called imitation vanilla flavor, and that’s just what it is.

Pure vanilla extract is generally more expensive, due to the rarity of vanilla pods as an ingredient.

How To Make Vanilla Extract?

Vanilla extract is, of course, made by extracting the flavors from vanilla pods. The vanilla beans (from the pods) are soaking in a mixture of water and ethyl alcohol. The alcohol functions as a mild solvent and brings the vanilla flavor out of the beans and into the solution of water and alcohol. The vanilla flavor is found in a molecule called vanillin, which is found in vanilla beans.

Standards for the extract manufacturing process of vanilla extract can vary from state to state, or from country to country. Generally, though, that is the method. The US FDA states that the final product must contain thirty-five percent alcohol and 13.35 ounces of vanilla beans per gallon. As long as these standards are met, the remainder of the space can be any number of things. Mostly, it will be water, but it can also be small amounts of sweeteners like sugar, corn syrup, or dextrose.

This relatively simple production process means that it is done in the kitchens of some, particularly dedicated bakers. They often make up a solution of vodka, water, vanilla pods, and beans. The extract this produces will be every bit as good as shop-bought vanilla extract.

Vanilla extract can be quite expensive, thanks to the price of alcohol and the price of vanilla. This means that buying from a store can add up, over time. This is the main reason why people choose to make their own vanilla extract - it will lead to a lot of savings over time.

How To Use Vanilla Extract?

The nice thing about using vanilla extract in your baking is that it doesn’t affect the structure of your baked goods. Instead, it only provides flavor. This means that you can add in as much as the recipe might say to get the right flavor. Of course, you can always add or subtract a little!

One of the best uses for vanilla extract is to enhance surrounding flavors. It can be used in a similar way to salt (though, of course, with a different flavor) to provide a boost to less intense flavors. A great way to use it is in chocolate-based desserts, where the vanilla can help to accentuate some of the bitter, interesting, and complex flavors of the chocolate.

The alcohol is usually derived from grain. Of course, grains are where gluten can be most commonly found, so the question of whether there’s gluten in the extract remains.

Thankfully, the distillation process of the alcohol results in the final gluten in the alcohol being fewer than twenty ppm, which is well under guidelines for products to be considered gluten-free.

What Are The Substitutes of Vanilla Extract?

Generally speaking, you can use vanilla extract and vanilla bean paste interchangeably. Vanilla paste is a blend of vanilla extract and vanilla powder, which gives it a flavor that is more intense overall. Therefore, while the flavor is identical, we might suggest using a little less vanilla paste than you might use extract. This will balance the flavors better overall.

Vanilla flavor is made in much the same way as vanilla extract, though the ingredients differ somewhat. Vanilla extract makes use of alcohol to extract the flavors, while vanilla flavor doesn’t. Therefore, it cannot be labeled as ‘extract’.

Despite this difference in the manufacturing process, they taste virtually identical and can be substituted in a 1:1 ratio in any recipe.

Vanilla beans are the whole vanilla pod, and they contain thousands of tiny seeds within them. The seeds themselves contain a very concentrated vanilla flavor.

To use vanilla beans, you must buy good quality ones. Ensure that they’re soft and pliable, or the flavor will be weaker and stale overall. Cut the beans in half, and then split each half down the center with a paring knife. Use the blade of the knife to scrape out the seeds - that’s where the flavor is!

When substituting, use one vanilla pod’s worth of seeds in place of 1 tsp of vanilla extract. This is a roughly comparable flavor intensity in the final product.

Baked Alaska, also known as omelet norvegienne, omelet surprise, or omelet siberienne in different parts of the world is a delicious old-school dessert...

If you’ve only tried Starbucks Affogato so far, it’s time you try the real deal. Use this detailed affogato coffee recipe to make delicious show-stopping...

A popular dessert recipe with its perfect velvety texture, red color and, of course, rich flavor cream: Red Velvet Cake! The taste of cheese cream in between...

Cannoli is an Italian dish. One of the most served dishes at the bakeries of Italy, a perfect starter for your day. It is simply one dish that is luscious...

No need to describe the flavor of Oreo biscuits! Think of a snack prepared with these biscuits, which are in unique harmony with milk or coffee with their...

Out there in the culinary world, chefs have been using different types of vinegar...

Roux is an apparently simple combination of ingredients, but it can turn any sauce,...

Top 5 Foods That are Good for Your Mental Health

The foods we eat in daily life not only affect our physical health, but also our...