Sweet peppers are a unique veggie category; they’re incredibly versatile! And they can add color and flavor to your meals. Learn all about them. 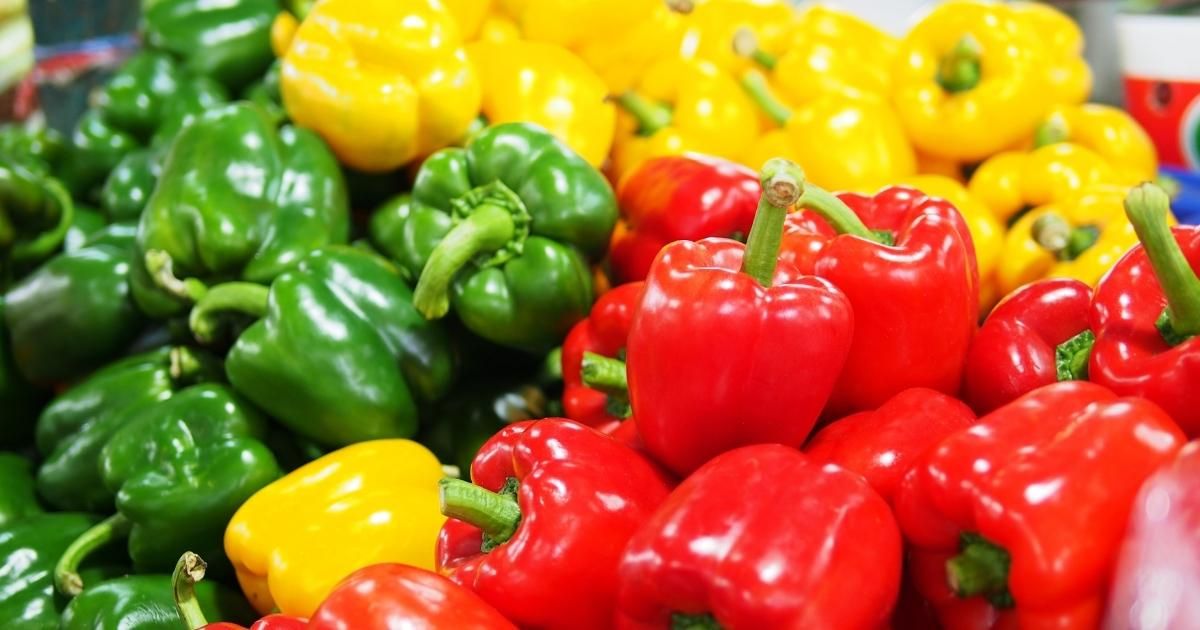 Sweet peppers are just that — non-spicy peppers. That doesn’t mean the veggies aren’t exciting! In fact, sweet peppers might just be the ingredient you were looking for.

Sweet peppers are easy to add to your cooking, but they’re not all the same, and knowing a bit about them is a great idea. Let’s talk about popular sweet peppers.

What Are Sweet Peppers?

Sweet peppers are sweeter than their hot counterparts. Interestingly, all peppers are part of the same family, the capsicum, and they’re native to Mexico and Central America.

Although Mexican people appreciate the peppers’ heat. When the first European colonists discovered the fruit (fruit, not veggie), they immediately began to breed it to eliminate its fiery taste. Bell peppers and other sweet peppers were born, and they became widespread.

Just like you’ll find dozens of spicy peppers in all shapes, colors and sizes, the sweet pepper family is varied. Here are the most common sweet peppers. What are the different types of sweet peppers and how to use them?

These are the most popular types of sweet peppers in the world. Some are mildly spicy, and others are not spicy at all. Regarding versatility, there’s a sweet pepper for your every need.

Also known as yellow wax pepper, this sweet pepper can have as little as 500 Scoville Heat Units, the scale used to measure spiciness in peppers. This heat is negligible for most people, making the banana peppers easy to consume and family-friendly.

These peppers are large enough to be stuffed with ground meat, crumbled sausage or cheese, but they’re also commonly pickled or used as a garnish — they’re even popular pizza toppings in some places! Banana peppers, of course, have an elongated shape and a banana-like yellow color.

Yes, green, yellow (orange) and red bell peppers are the same fruit in various ripening stages, and the green variety is the youngest and most herbaceous — these are rarely sweet, but never spicy.

Although not all Green Bell Peppers change color as they ripen, most do. As the fruit ripens, it changes from green to yellow or bright orange. They also lose the unripe, herbal or “green” flavors typical of under-ripe varieties like the green bell peppers.

Yellow bell peppers are sweeter than green peppers but not as much as the fully ripe red bell peppers. However, these sweet peppers usually have the most impact on the plate. Combine yellow bell peppers with other varieties is typical in salads and rich dishes like Mexican fajitas, alambres and other stews.

Red bell peppers are fully ripe bell peppers. They were once green and then yellow. Like most other fruits, many chiles get their color during the ripening process, and they’re all green in the early stages.

Red Bell Peppers are not only riper than the green and yellow varieties, but they’re also sweeter since the fruit accumulates sugar during the ripening process. These are also less herbal than green bell peppers and have a more significant impact on the table, thanks to their bright red color. Cooks often combine red bell peppers with other sweet peppers to create meals with contrasting colors and flavors.

Spanish explorers took American peppers back home, where farmers created new varieties, often in the sweet pepper category. Since cooking with peppers was not typical, like in Mexico, to make salsas, people made preserves out of their fruits or smoked and dried them to make chili powder, AKA paprika.

Most Spanish peppers are sold as pimentón, and although some are mildly spicy, most are rather sweet. Pimentón is also often smoky, thanks to the curing process used to preserve them. If not used to make paprika, pimentón can be consumed as-is or in soups, stews and broths.

Poblano peppers are fist-sized green peppers that are longer and softer than bell peppers. Poblano peppers can be huge, so it’s common for people to stuff them with a wide variety of fillings.

The most typical filling for poblano peppers is picadillo, a combination of ground meat, dried fruit, garlic, onion and spices. Cheese is also a standard filling for the massive pepper.

And although poblano peppers are never too spicy, with between 1000-2500 Scoville heat units, one must devein and deseed them meticulously to prevent them from being too hot. Poblano peppers are part of the most typical Mexican meals, including the famous chile en nogada.

This bite-sized, oval-shaped pepper is immensely popular in the Caribbean, and its name means sweet pepper in Spanish.

This pepper variety looks precisely the same as one of the fiercest chiles in the world, the habanero. Still, while a habanero might contain up to 350,000 Scoville heat units, the aji dulce contains fewer than 1000, five times fewer than those in the already mild jalapeño. Only the most sensitive palates find this variety spicy. Aji dulce is part of the Capsicum Chinese family, peppers of American origin that were once mistaken as Chinese. Consume whole peppers in salads, or add them to soups and stews, especially if Caribbean-inspired.

The American chili peppers eventually found their way to Italy, where they were soon assimilated. Peppers are common in Central and Southern Italy, where the warm weather is ideal for cultivating the fruit. The country has also developed its own varieties, and the pepperoncini, known as friggitello in Italy, is the most famous.

Chili pepper flakes, like those sprinkled over pizza, are made with this variety, and although most pepperoncini are pickled, they can also be consumed fresh or ground into a fine powder. Italians use Pepperoncini widely, but it’s also trendy in the United States.

One of the most popular main dishes of Turkish cuisine. A wonderful recipe that you can present to your guests.

From different types of cake frosting to various types of birthday cakes, there are...