Spaghetti Bolognese - A Delicious Meaty Sauce with your Pasta

This spaghetti bolognese sauce could not be any easier and delicious to boot. Make it for your next spaghetti night or date night to satisfy your loved ones.

Spaghetti Bolognese is a classic Italian dish that is truly for those meat lovers out there. You will never see tomato sauce the same way after this.

This recipe is sure to be added to your weekly menu as your family will not be able to get enough of it. Bring a taste of the old country to your home. 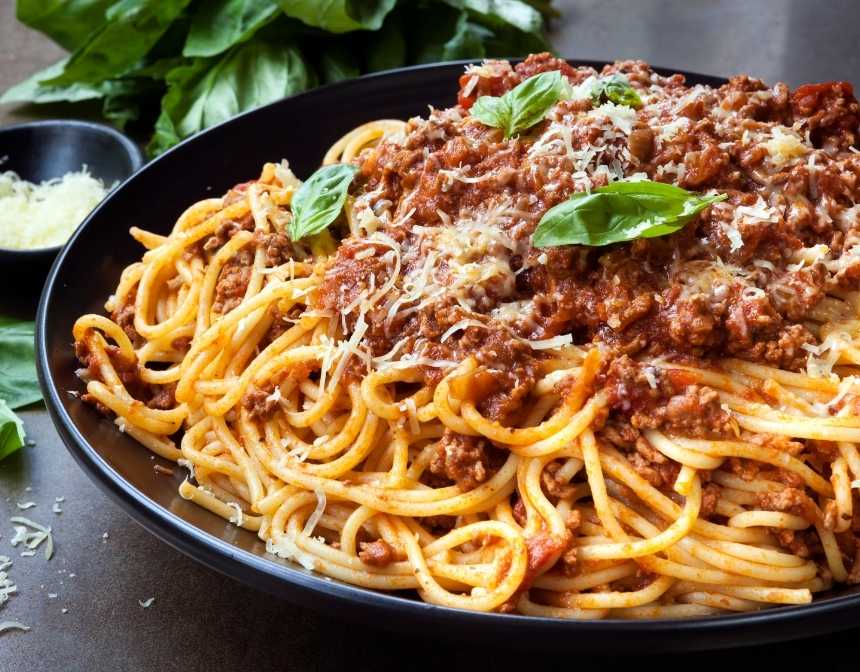 What Is The Difference Between Bolognese Sauce and Spaghetti Sauce?

Bolognese sauce and spaghetti sauce are often confused with one another. It is a very common mistake, but there are actually some distinct differences. Spaghetti sauce is usually just that, a sauce. It usually does not contain any meat.

Even though you can find meatballs or Italian sausage in spaghetti sauce, it still maintains its sauce like consistency.

Bolognese however is more of a sludge for lack of a better term, with meat, usually beef or lamb. Bolognese almost is very close to a chili, due to the consistency, and is also served with larger noodles like pappardelle.

What Can I Add to Spaghetti Bolognese to Make It Better?

Some people tend to add carrots and celery to the onions. Almost like a mire poix, which is what many chefs do to add flavor to soups and stocks. It is just another way to add a depth of flavor.

Once you saute this mixture, you could also deglaze the pot with red wine and beef stock. Some people even add a little cream to help with the consistency and just to add more fat to the dish.

The key though is the meat that you use and how long you let it cook. As stated in the previous answer Bolognese should be like a sludge so you need to let the meat cook and really breakdown. A true Bolognese could take all day to cook and most people do not have that kind of time.

The way Gordon Ramsay makes his version of spaghetti Bolognese is a great mix between the previously discussed methods to improve your Bolognese and the recipe here. He uses carrots, wine, and cream to help add flavor, but he uses minced beef and canned tomatoes to cut down on the time.

What Is Bolognese Meat Sauce Made of?

Bolognese meat sauce is made of several different elements, which is why it is so delicious. It usually begins by sauteing some veggies and browning some meat, be it minced beef, beef chunks, or lamb.

Tomatoes are added along with some red wine in some cases and is then reduced down so that cream can be added. There are also many herbs and spices like basil and oregano.

Why Do You Put Milk in Bolognese Sauce?

Most Bolognese sauce recipes call for milk or cream to add more fat to the dish to give it velvety lusciousness. Adding milk or cream will also aid in the consistency of the sauce.

How Do You Thicken Bolognese Sauce?

Typically, Bolognese sauce is thickened by allowing the sauce to reduce as it cooks. The longer it cooks the thicker it will become. This is usually why milk or cream is added to the sauce. You can also thicken your sauce by using a cornstarch slurry or a roux if need be.

Spinach lasagna, which is a vegetarian recipe that will appeal to everyone's taste...

This pesto pasta recipe is easy and very tasty. Add flavor to the pasta with grocery...

Pasta dough is one of the recipes you should definitely try at home. Once you have...

Chicken fettuccine alfredo is a dish that has been satisfying Italian food lovers...

There are many regional and personal variations for preparing potato gnocchi with...