Dragon Fruit Benefits & How To Cut It?

The rich, complex flavors of dragon fruit are spectacular, and so are some of the health benefits too! We’re here to let you know everything! 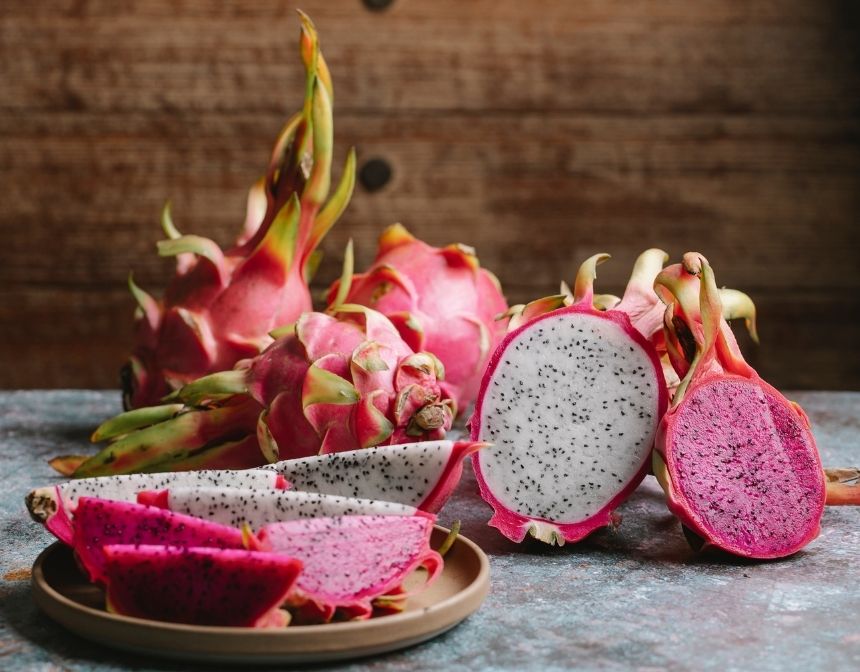 This beautifully unique fruit grows all over the world but is native to southern Mexico and Central America. It goes by a number of names, and we’re here to tell you everything that you might need to know about dragon fruit. We’re going to cover everything from how best to eat it to how it stacks up against passion fruit. Without further ado, let’s talk fruit!

What Is Dragon Fruit?

Dragon fruit or Pitahaya is an amazing tropical fruit that actually grows on a cactus. Specifically, it grows on the Hylocereus cactus. The flowers of this cactus only open at night, and it’s utterly beautiful.

The most common types of dragon fruit have bright red skin with green scales - together these things resemble a dragon, which is how the fruit got its name. The most widely available variety of the fruit has white pulp inside, with black seeds. Although, another type is out there with red pulp and black seeds.

Dragon fruit looks particularly exotic on both the inside and the outside, but the flavor is actually quite recognizable! It’s been often described as a sweet cross between a kiwi and a pear.

How To Cut Dragon Fruit?

Cutting dragon fruit is easy. Many tropical fruits have to be cored to reach the edible part. Fortunately, the seeds of the dragon fruit are in the fleshy part. In this way, the fruit can be cut in half or into cubes.

Here are a few ways to cut this exotic fruit:

How To Eat Dragon Fruit?

Eating dragon fruit is just as easy as cutting it. In fact, it might even be easier!

Alternatively, you can slice dragon fruit into wedges or thin slices, and then serve the fruit like a smaller version of watermelon wedges.

Finally, you can take the pulp out of dragon fruit, and add it to a salad or cook with it. As with a number of tropical fruits, dragon fruit pulp can be tasty when it’s been grilled against very high heat.

Is Dragon Fruit Good For You?

There have been a number of studies carried out which suggest that dragon fruit might provide a number of health benefits for you - the vast majority of these are considered to be because dragon fruit has a large amount of fiber and antioxidants within it.

For example, both red and white varieties of dragon fruit have been shown to reduce insulin resistance, which can be a problem in people who are overweight. In the same study, dragon fruit proved to help with problems posed by a fatty liver.

In a study carried out on mice, the rodents were given a high-fat diet along with an extract of dragon fruit. These mice gained less weight than the control group, plus they had reductions in liver fat, as well as insulin resistance and inflammation. These changes were mostly attributed to beneficial alterations in the gut bacteria.

This change in gut bacteria is likely brought about by prebiotic fiber. Dragon fruit contains a lot of prebiotic fiber which promotes the growth of beneficial bacteria in your gut - this has been shown time and time again to improve metabolic health.

In a nutshell, animal studies strongly suggest that dragon fruit can help improve a number of things: insulin resistance, liver fat, and heart health. However, studies that have been carried out on people have had inconsistent results.

Dragon fruit has a range of reported benefits that, while very likely in animal trials, have often proven to be less likely in human trials.

Dragon fruit is full of nutrition and is rich in antioxidants. It is low in calories. Due to level of vitamin C in it, it may boost your immune system.

Furthermore, a study has been carried out in move on a high-fat, high-carb diet. Of the several different groups of mice involved, the group that received dragon fruit juice had better blood sugar responses and reductions in some liver enzyme markers. A separate liver enzyme marker significantly increased. This means that dragon fruit juice has been shown to have a positive effect on the blood sugar responses of mice, and also to heighten liver function.

However, study results on the effects of dragon fruit on type 2 diabetes in people are inconsisnent. In order to recommend dragon fruit one way or another for a person suffering from a given disease, more research is needed to confirm beneficial effects.

This is a natural question to ask, as the two fruits are quite similar in a number of ways. They both have a hard outer shell with a soft interior, and they both have bright, fruity pulps.

Passionfruit is known to be stupendous for cardiovascular health. For example, it is often used as something to help out with asthma treatment, as well as heart care and regulation of blood sugar. These are all really important and helpful, and worth bearing in mind.

However, dragonfruit has been shown to have a more focussed effect on blood sugar management, which means that it might be useful in more specific cases than passionfruit.

Of course, getting more fruit and veg in your diet is nearly always a good thing. This means that it’s certainly worth eating one or both of these fruits, no matter what you’re hoping for a little help with.

Dragon fruit still holds its own despite its relatively new status as a smoothie and smoothie bowl. Fuchsia is a delightful shade, so who could resist...

Frozen desserts come in all colors, shapes and flavors. There’s a frozen treat...

Asia is home to the most exciting flavor combinations and ingredients. The food is...