Types of Vinegar and How to Use Them?

It can easily feel like there are a million and one different types of vinegar out there, but we’re here to help you figure out which one’s which, and what they’re all used for. 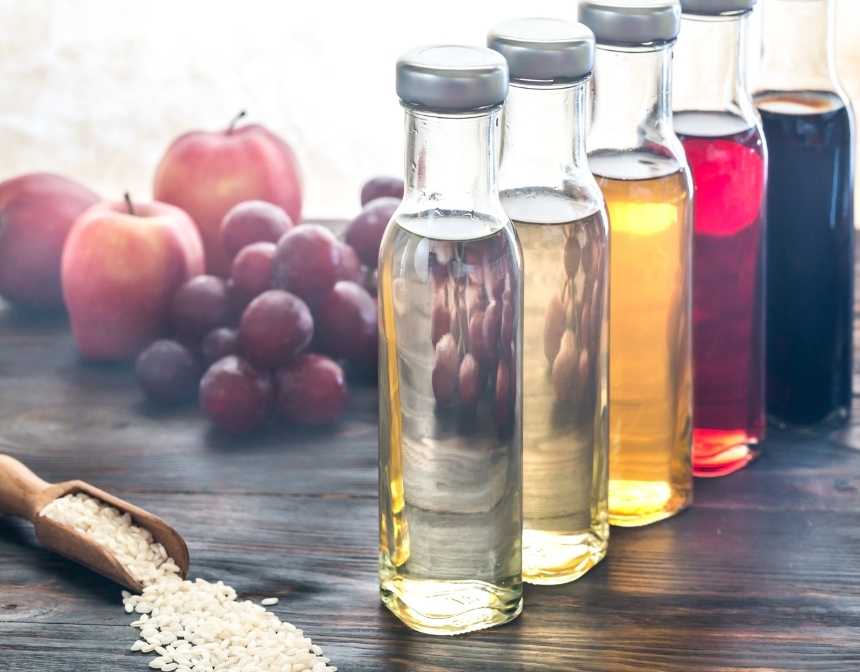 Out there in the culinary world, chefs have been using different types of vinegar for a long time! As well as the types you might know, such as balsamic vinegar or white, and there are more obscure versions, such as rice. In this article, we’re going to demystify the world of vinegar to make sure that you can use them in your home with no effort at all!

This is a very simple question with quite a long answer. At the most basic level, though, vinegar is a solution of water and acetic acid. The concentration varies but is generally between five and eight percent.

How Is Vinegar Made?

Well, that depends on what type of vinegar that you’re talking about. Generally speaking, vinegar is produced by allowing oxygen to interact with an alcoholic liquid, leading to fermentation and the production of acetic acid. That’s where vinegar gets its name from, actually, an old French term for ‘sour wine’, which is wine that had been left to turn into vinegar.

The process of making malt vinegar, for example, starts with the malted barley. The grain is produced and is then cracked and mashed in hot water to allow the sugars and other chemicals within the grains to be extracted.

Yeast is added to that mash, and it is cooled down to allow it to ferment for roughly six days. At this point, the process is identical to making beer, aside from the lack of hops.

Next, the beer-like liquid is added to an acetifier, along with a specifically cultivated bacteria called acetobacter. This bacteria converts the alcohol in the liquid into acetic acid and leads to the vinegar’s final sharp flavor.

At this point, the vinegar is brought to a specific level of acid concentration by diluting it, and then it is bottled and sold. Simple!

Apple cider vinegar is, for want of a better term, particularly ‘trendy’ at the moment. The vinegar has a huge number of uses and is typically considered to be exceptionally healthy. It’s used to both flavor and preserve food, and is produced by fermenting the liquid of crushed and strained apples twice over.

Balsamic vinegar is not produced through fermentation! Instead, it is produced by aging pressed grapes in oak barrels, similarly to how wine is made. Balsamic vinegar has a very sweet and zesty flavor that can be used for both sweet and savory dishes.

This is by far the most common type of vinegar that’s used in the world. There’s probably a bottle in your kitchen! White vinegar has a very sharp taste and harsh smell, as it has been derived from grain, resulting in a crisp and clear end product.

Rice vinegar is not derived directly from rice but, rather, from rice wine. It’s commonly found in Asian cuisine and offers a fairly sweet flavor compared to other types of vinegar. It is best used to add a particularly lovely Asian twist to barbecue sauces, marinades, or pickled vegetables.

The flavor of white wine vinegar is much milder than white vinegar, as it has been made from white wine instead of grain alcohol. It is considerably less acidic than both white and apple cider vinegar.

The flavor is very light and balanced overall, which makes it a refreshing addition to salad dressings and soups - it’s a very popular type of vinegar!

This is often used in Mediterranean food and works best in vinaigrettes and reductions.

There are a huge number of different types of vinegar out there, and we could spend days and days talking about them all. Instead, we’ve chosen to outline the most popular ones here, make sure to try a few and experiment!

A huge number of people out there in the world believe that vinegar has positive benefits for good overall health - most especially apple cider vinegar. That specific vinegar is recommended to promote weight loss, reduce cholesterol, and lower blood sugar levels.

Vinegar can also be used as a minor antibacterial agent for small bumps and scrapes. While it has less medical science to back it up, still more people believe that it can help to relieve skin irritations and blemishes.

What Is Vinegar Used For In Cooking?

Vinegar, by and large, is used to control the amount of acid in a dish. This can be taken in both the literal, chemical sense and also in a flavor sense.

Vinegar is often used in dishes as a condiment or a seasoning. This is seen as especially important in creamy or fatty foods, as a small amount of vinegar will help to brighten the overall meal in no time.

On a chemical level, vinegar can also be used for processes such as pickling and preserving - suspending food in an acidic liquid will preserve it for a very long time - making vinegar a very useful ingredient.

Vinegar can be kept forever. No, really! When it’s stored in a closed container at room temperature, the hugely acidic nature of vinegar means that it’s incredibly resistant to spoilage of any kind.

The only thing to bear in mind is that unpasteurized vinegar still has live bacteria in it. This means that sediment can develop, though it can be easily filtered out, and is food safe.

Here are delicious recipes you can make with vinegar

Paşadayı, the new favorite square of Alaçatı in Çesme, has an amazing tapas restaurant 'Ortaya' serves you with its delicious delicacies. You should...

With its excellent techniques, the unique Italian cuisine always manages to create harmony of different tastes. In this recipe, the tastes of lamb chops...

Wash the chickens and dry them with paper towels. Dip the flour.Put olive oil in the pan and heat. Add the chickens after the oil has warmed. Fry one side...

Eggs Benedict is quite possibly one of the most popular brunch and breakfast items on any menu. It is also a staple in many culinary schools as it contains...

Green tomatoes are a unique vegetable with great versatility in the kitchen. Still,...

With the effect of Covid-19 pandemic, we have seen that many products that we supply...

Ramadan is a period of worship to demonstrate spiritual thinking, gratitude, solidarity,...