This sweet and salty Chex mix recipe is tantalizing, baked to perfection, and bound to become your new favorite way to enjoy Chex mix! It’s that good.

The ultimate snack, homemade Chex mix has been a family favorite for decades, and it’s easy to see why. It is flavorful, crunchy, low-calorie, and addicting, all traits of a perfect snack. The recipe itself is also pretty simple and while fancier versions exist, you hardly need a fancy Chex mix recipe to have everyone crowded around one bowl to enjoy this tempting treat.

Not to mention, it’s super adaptable and can be kept on the counter for several weeks for some midday (or midnight) snacking. Out of the 50 something Chex mix flavors, the best Chex mix flavors are undoubtedly bold party blend, cheddar, traditional, and honey nut but some old Chex mix flavors are also fan favorites. And while for this Chex mix recipe oven is a must, that isn’t the case for all of them. You can cook your Chex mix in a slow cooker or just choose to not cook it at all. 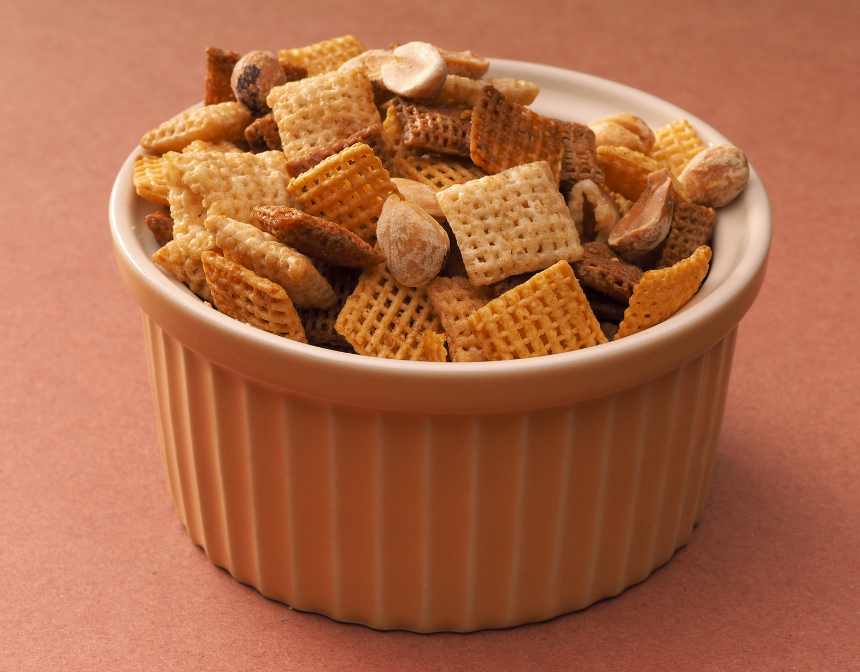 How To Make A Chex Mix?

Making this homemade Chex mix is really as simple as seasoning the melted butter (you can even use a Chex mix seasoning packet), making the cereal mix, pouring the butter into the mix, tossing, and cooking in an oven or slow cooker.

Chex mix is pretty much the healthiest snack you can have short of snacking on fruits and vegetables. It is rich in sodium, potassium, fiber, iron, calcium, and antioxidants and has relatively small amounts of sugar and fat.

And although the excess sodium can cause headaches, dehydration, and increased blood pressure if consumed daily, the multiple health benefits make it healthy enough for snacking on every now and then.

Most store-bought Chex mix flavors are not vegan, but traditional, ghost pepper, and popped are considered mostly vegan except for some problematic ingredients like sugar, distilled monosaccharides, caramel color, and natural flavors.

To make vegan Chex mix at home, substitute butter and Worcestershire sauce with their vegan counterparts, and use vegan-friendly cereal.

How about pampering your cat that is your furry friend? You can easily prepare delicious...

Baked apple chips are delicious and healthy snacks. Crisp and sweet, these fruit...

Paneer Pakora or Paneer Pakoda is paneer cheese that is deep fried. It is a popular...

Identified with American cuisine, this snack reflects the unique harmony of sausages...

Homemade popcorn shrimp are similar to popcorn kernels. These shrimp are golden brown...

The lemon pickle, an indispensable part of Indian cuisine, is found both on the table...