Bibingka is a popular Philipine sweet, a steaming hot rice cake which transforms simple ingredients into an irresistibly, soft and spongy dessert.

A baked rice cake which is a favorite in the Philippines and Indonesia. Bibingka can be cooked simply with rice flour and water, in this recipe we have used coconut milk to provide extra sweetness and richness to the dessert. Classically the bibingka batter would be poured into a clay pot lined with banana leaf, while this method is traditional we have adapted the bibingka recipe to make this more accessible to the everyday home cook. Using a muffin tin to create individual cakes which are warm, fluffy and sweet, the perfect way to both start and end the day. 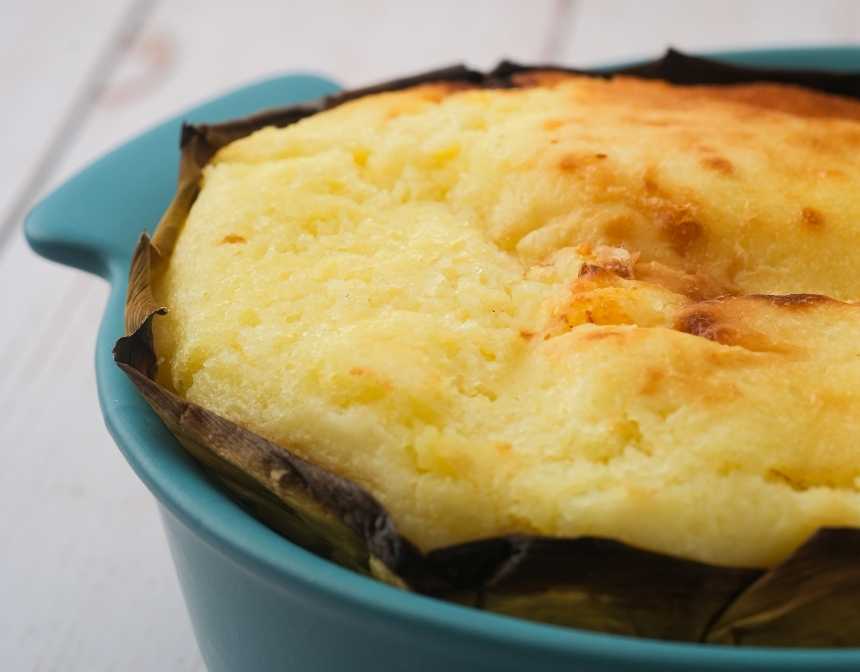 Bibingka can refer to a number of rice cakes which are prepared following a similar method of baking, this bibingka recipe details a guide for a simple homemade version of bibingka galapong. The cake is cooked within banana leaves with the basic ingredients of rice flour and water.

There are many variations of bibingka from sweet to savoury, the most popular being an addition of butter, sugar, coconut, evaporated milk, cheese, salted duck egg or pineapple. Varieties of bibingka include bibingkang malagkit, bibingkang mandaue, bibingkoy, buko bibingka, cassava bibingka, durian bibingka, salukara and sinukat. Classically the cake is baked in a special earthen clay pot known as a ‘bibingka oven’, wrapped in banana leaves and placed over hot coals.

For our homemade version we have provided a technique using everyday equipment including an oven and muffin tray rather than the specialised equipment which would be used in the Philippines.

Similar to bibingka is puto bumbong, another Filipino rice cake which is often served together at Christmas. Puto is rice cakes which are steamed rather than baked like bibingka, for bumbong the glutinous rice is steamed to produce a vibrant purple dessert.

The rice cake is best served warm or hot, providing a soft, spongy texture with a light chew. Flavoring is similar to rice pudding with a slight sweetness which ranges depending on the additional fillings.

After baking the top and bottom of the cake are sometimes charred to further enhance the flavor of the dish. Traditionally baked in banana leaf which acts as a liner to shape the ingredients and infuse an earthy tropical flavor.

How do you eat Bibingka?

Our version of bibingka is baked to muffin-size so can be eaten with your hands as you would most cakes. In the Philippines bibingka is a street food so would be consumed on-the-go, the cake can also be baked as a larger version then sliced and shared.

Where is Bibingka from?

Bibingka is believed to have originally been a Chinese creation which has then become a traditional dish in the Philippines. The sweet rice cake can be difficult to find outside of the Philippines so experience this popular dessert for yourself from the comfort of your own home following our simple recipe.

The dessert is similar to the Goan dish of ‘bebinca’ which contains flour, sugar, egg yolks, coconut milk and clarified butter. The difference is that bebinca is cooked gradually layer by layer and uses wheat flour rather than rice flour.

When to serve Bibingka?

The sweet rice cake is served as a street food throughout the Philippines all year round. The dish becomes especially favoured during times of celebration, such as the festive Christmas period.

Street vendors offer fresh hot bibingka outside of churches to be enjoyed before morning mass or after night mass, they are the snack of choice following Misa de Gallo which is a 9 day series of early morning masses beginning at 4am in the lead up to Christmas.

Bibingka is often served as a breakfast, snack food or dessert due to its light and sweet flavoring. The cake is perfectly paired with coffee, warm milk, hot chocolate or hot ginger tea known as salabat alongside a second sweet treat of puto bumbong.

Sprinkle the granulated sugar on the pumpkins and leave for 1 night with the lid...

Put the rice flour in the pan. Puree thoroughly with 1 glass of milk. Add the whole...

Pumpkin pie is a spicy, custard-filled dessert. On Thanksgiving and other special...

Gluten-Free Chocolate Zucchini Cake is an easy-to-make summer classic. One of the...

Quince and drop chewing gum, you won't be able to resist this duo. From the invitations...

Ube Ice Cream, which belongs to South Asian cuisine, can be prepared with cream,...