Here are 10 traditional Chinese foods to try in China. Authentic Chinese dishes that show the country’s cuisine are more varied than you think! 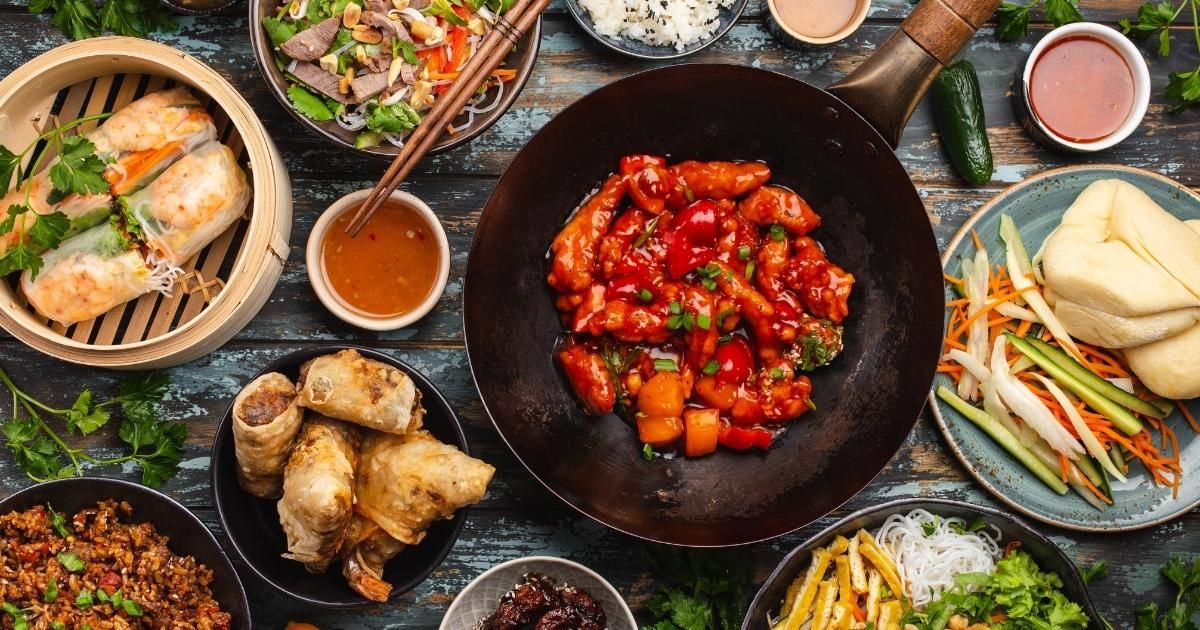 Chinese food is incredibly varied. After all, the country is immense and has a considerable population. Regional food abounds, and there are dozens, if not hundreds, of specialties in every province.

These are 10 Chinese foods that show that authentic Chinese cuisine is more varied than you think. There’s something for everyone, and most of it is colorful, vibrant and delicious!

What Is Traditional Chinese Food?

Chinese food is diverse. After all, we’re talking about one of the world’s largest countries, with one of the largest populations. Every province in China has its own collection of specialty foods and ingredients, making Chinese food one of the most sophisticated on the planet.

Although listing only ten Chinese dishes is only scratching the surface, it should give any food lover and enthusiast an idea of what to expect from China’s kitchens. These are some of the most famous and our favorite Chinese food items. Have you tried them all?

This famous dish from Beijing goes back to China’s Imperial Era, and it’s one of the most sophisticated and exciting Chinese foods ever. Think of a whole duck with golden, crispy skin and the most tender meat. The birds are slow-roasted while hanging in special ovens, becoming authentic edible pieces of art.

When ordering this fatty bird, a chef or trained server might carve it in front of you in a ceremonial experience worthy of such delicacy. The secret is in the duck’s breed and in the marinade used to give flavor to the slow-roasted bird.

Dim sum is a meal consisting of several small plates, often enjoyed at lunch with tea. Dim sum originated in tea houses of Cantonese origin as a way to provide something to eat while people enjoyed themselves. Tea is a social experience in China.

Dumplings, rolls, cakes, buns, and even soups can be part of dim sum and often are. The fillings and ingredients vary, from meat and seafood to eggs and veggies.

Although dumplings play a significant role in dim sum, they’re worthy of their own spot on our list. Dumplings were invented in China over 2,000 years ago, and they’re one of the country’s most popular food items.

Dumplings in China vary. Some are made with wheat flour wrappers, while others are made with glutinous rice flour. They can be filled with ground pork and shrimp or seafood and cabbage. Chicken, fish and even lamb are common fillings for dumplings, and they are often served with one or several sauces — from soy sauce to chili oil.

Fried rice is prominent all around Asia but is particularly important in China. You can find the specialty in almost every corner of the country, mainly in the south, where rice is a staple. Fried rice is often made with steamed rice flash-fried in a blistering wok with a wide range of vegetables, proteins, sauces and condiments.

There are dozens of types of noodles in China. Some are made with wheat flour, others with rice flour. Noodles can contain eggs, although most of them don’t. An easy categorization of noodles is based on how they’re made — fresh, dried, boiled or steamed. They can also be cut, extruded, pulled or kneaded; this is just the beginning.

Then you have the Chinese noodle dishes! The most popular are the chow mein, lo mein, chow fun and ban mian. We could easily make a top ten list of Chinese noodles alone.

Char siu is a popular Cantonese dish consisting of barbecued pork, often served with rice or noodles. The meat is tender, and the glaze is sweet and sticky. The sweet and savory dish is delicious, and the smoky meat is the main ingredient in many meals.

Sichuan cuisine is well known for being intensely flavorful and spicy. Cooks here use lots of hot peppers and their very own tongue-numbing Sichuan pepper. Still, not all the dishes in the region are pungent.

Sichuan pork is twice-cooked pork, boiled and fried for fork-tender meat that comes to life with a thick brown sauce made with rice wine, hoisin, soy sauce, ginger, sugar, chili paste and other typical condiments. The result is delicious — perhaps the tastiest pork dish in China!

This famous dish, better known as Gong Bao in China, is another Sichuan classic, so you know it’s spicy. This tender chicken, though, is much more than heat — it has lots of flavor and texture from peanuts, veggies and red, savory sauce. The dish is made by marinating the chicken and stir-frying it with leeks, peanuts and other goodies.

Western Kung Pao is often sweeter and lighter than the real deal, but the typical ingredients remain. Of course, only the Chinese versions contain the spicy Sichuan pepper; that’s the main ingredient right there!

Also known as fire pot, the Chinese hot pot is a comforting dish suitable for weeknights and special occasions. Picture a big pot of soup served at the table with its own heat source, keeping it steaming hot and bubbly.

The secret behind the hot pot is the rich broth, which varies. The broth is so hot that you can add raw ingredients, like meat and veggies, and cook them right there on the table. Of course, the cooked food is best enjoyed dipped in one of several classic sauces and condiments.

The simmering soup is more than a way of cooking meat, mushrooms and veggies — you can enjoy it on its own as well!

Ending on a sweet note, mooncakes are now famous worldwide, but they’re still very much a popular sweet in China, often found during the Mid-Autumn Festival.

Think of a thin pastry filled with a dense and sweet egg yolk filling. Of course, mooncakes come in many flavors and can be pretty sophisticated, even expensive. Lotus paste and sweet bean pasta are other popular fillings, but what makes these two biters popular is their looks — they’re as pretty as tasty!

What are your favorite Chinese foods? Are they traditional dishes or new world interpretations? After all, Chinese food has conquered the world, and we all have a favorite dish.

Lo Mein Noodle is a classic Chinese dish. Add plenty of vegetables and protein to this dish and you will definitely be satisfied. You can use your favorite...

Potstickers, one of the most popular appetizers of Chinese cuisine, are usually made with pork. You can also prepare steamed or fried Potstickers filled...

A delicious recipe from Asian cuisine: Chicken Fried Rice! This hearty and protein-packed recipe is made with juicy-tender chicken and rice. This easy-to-make...

Egg Rolls are one of the most popular snacks of Chinese cuisine. The classic egg roll is stuffed with pork and vegetables. It is a perfect warm start with...

Air fryers let you cook your favorite foods with little to no oil. That’s a game-changer....

Seitan is a meat alternative that’s been traditionally made in China for an awfully...