Learn all about the most traditional food in Japan. Here are some Japanese foods that could really make your day! The country’s food is more varied than you think! 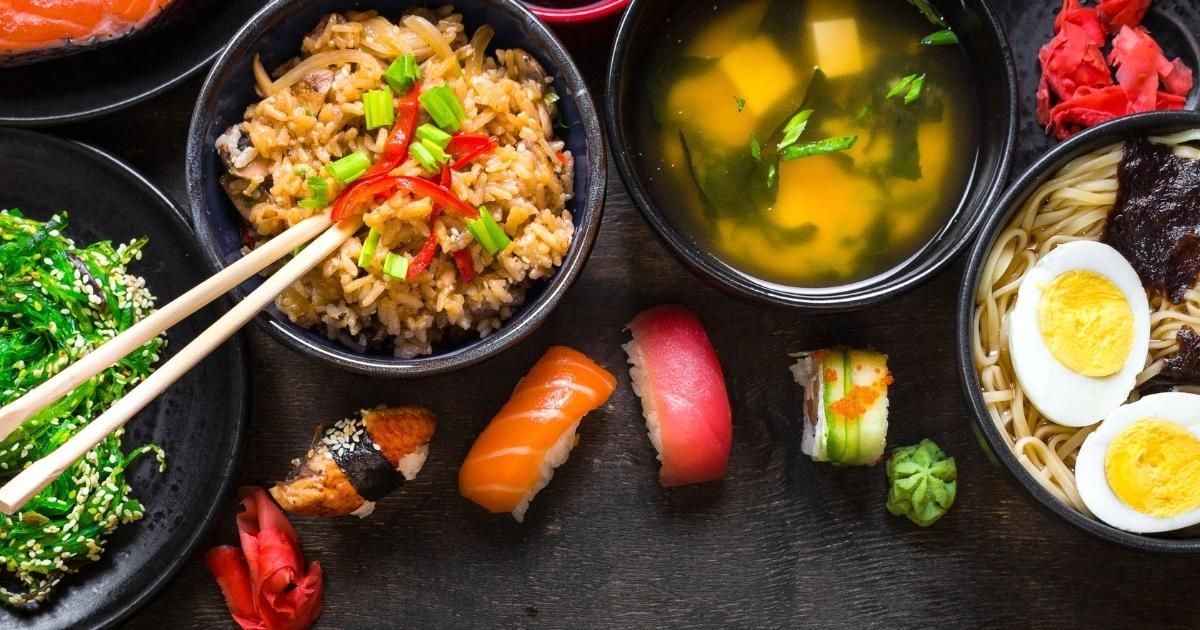 Japanese food enjoys global fame, and you surely know why — the fluffy steamed rice, the fresh fish, the seaweed and mushrooms. There’s something on the Japanese menu for everyone. Japanese cooking is immensely popular!

Still, Japanese food is more varied than everyone thinks — it’s definitely much more than sushi! So, here are 10 traditional Japanese foods you’ll want to add to your bucket list. Welcome to the land of the rising sun.

What Are Traditional Japanese Food?

Japan is a series of islands out in the far east, where the sun rises. This means that seafood is a big deal in the country, but the land is also home to splendorous mountains, where unique produce grows. Japanese food is all about making the most out of their extraordinary ingredients, with not many sauces or condiments to mask them.

There are many regional dishes around Japan, but a few are national treasures and great examples of the country’s cuisine. This is traditional Japanese food, and you’ll love it.

Sushi comes in all colors, flavors and sizes, but one of the most prominent types of sushi is the maki sushi. You already know this one — these are the sushi rolls made of rice, nori (seaweed) and a wide variety of fresh ingredients: shrimp, fish, veggies.

Maki sushi is rolled in bamboo mats, and the quality of the ingredients is paramount, as the flavors are only enhanced by an optional dab of wasabi and a splash of soy sauce. Making rice for maki sushi alone is quite complicated, and it takes practice to get the sticky steamed rice right.

Maki rolls might be popular, but most experts (and the Japanese) believe the nigiri is a much purer version of sushi. Here, a rice pillow, slightly hand-pressed, becomes a bed for a single ingredient, whether it’s raw salmon, shrimp, eel, tuna or another delicious topping.

Nigiri is amongst the simplest-looking food items globally, but they’re the most sophisticated. The rice is just a means to transport the fresh ingredients to your mouth, and the topping is the star of the show. These one-biters are the very definition of pleasure, especially if you love seafood.

Let’s go with Japanese food that might not be as trendy as sushi, but it’s the ultimate comfort food in Japan. Miso soup is a popular breakfast in Japan, and it’s because the rich broth is nutritious and its flavor is beyond comparison.

To make the soup, you must infuse a thick stock or dashi with nori seaweed, bonito flakes and sometimes shiitake mushrooms. Miso soups often come with tofu, veggies or anything in season, really. Enjoy this memorable Japanese food with a side of rice and experience how Japanese people start their day.

This is the notorious Japanese noodle soup, and it’s a Chinese export. However, Japanese people have made ramen their signature dish, and it has become incredibly sophisticated.

It all starts with a rich, slow-simmered broth flavored with soy sauce or miso. And just like there are many ramen broths, there are dozens of toppings available, all representing a unique ramen style. Expect to find sliced pork in your bowl of ramen, along with fresh veggies, seaweed, fish cakes and, of course, a whole bunch of bouncy noodles.

Yakitori means grilled chicken, and the term is used for the flavorful chicken skewers popular in small Japanese eateries or izakaya. These are no regular skewers, though; the meat is beautifully seasoned, often brushed with sweet, sticky sauce as they char over binchotan charcoal — the hottest on earth.

You can easily enjoy three or four of these in one sitting, and no piece of the chicken is wasted, so you can have dozens of chicken skewers, all made with different types of tasty meat! This is a popular beer snack in Japan; why wouldn’t it be?

Sashimi is often considered a type of sushi, but this Japanese food is in its own category. People think this is just raw fish, but sashimi is much more than that. It takes years to master this specialty, as you must master your knife skills to get consistent slices, sometimes insanely thin!

What makes Japanese sashimi is the quality of the fish; of course, that’s why you can’t find sashimi this good anywhere else in the world. Any fresh fish can become sashimi, and even the different parts of the fish are treated and sliced differently.

Tamagoyaki means grilled egg, but this is not a grilled specialty but a gentle dish made in a griddle. Think of tamagoyaki as the Japanese version of the omelet, but it’s softer and juicier than most omelets.

Tamagoyaki is often a course in sushi restaurants, and the egg is treated as such — with immense delicacy. Chefs can flavor the egg with sake, mirin, soy sauce or a few other seasonings, but the result is always the same, a lovely, custardy one-biter that will make you rethink what you thought you knew about eggs.

Tonkatsu is a much heartier Japanese food; this one will leave you satisfied all day! We’re talking about a breaded and deep-fried pork cutlet that’s both crispy and fork tender. The secret is in the Panko breadcrumbs, crispier than regular crumbs.

This comforting dish became popular in the 19th century and was probably first made with beef. Today, Tonkatsu is always made with pork, although chicken and beef varieties exist with other names, and it’s served with a popular brown sauce and shredded cabbage.

This Japanese food is a specialty in Kyoto, but you’ll find it everywhere around the country. Hard to describe; picture the okonomiyaki as a Japanese pancake or crepe. Cooks use wheat flour dough to form a thin disk, which they then top with cabbage, meat, seafood, sauces, seaweed, mayo and pickles — the sky’s the limit!

Wheat flour became popular in Japan after WWII when rice was in short supply, and the thin crepes emerged as a popular way to use it. Now, okonomiyaki is a widespread street food snack, and it’s pretty filling!

How not to talk about one of the most eminent Japanese foods, the Japanese version of the Chinese fried rice, popularized in Japan one hundred years ago after it was introduced by Chinese immigrants in the country.

Although the Japanese often enjoy their rice steamed and seasoned with rice vinegar, this recipe calls for fried rice tossed in a blistering wok with eggs, veggies, and sometimes meat or seafood. What makes yakimeshi special is the finely minced ingredients that merge with the rice seamlessly, becoming one wholesome rice dish.

What are your favorite Japanese foods? It’s okay; you can have more than one!

Shrimp Tempura is a Japanese appetizer of fried shrimp covered with tempura dough. These tender and crispy shrimps are perfect as a main course or appetizer....

Japanese rice balls, also known as onigiri or omusubi, are a hearty and easy snack. It is a good alternative to sandwiches for lunch. It is prepared with...

Pickled Ginger (Gari) or Sushi Ginger belongs to Japanese cuisine. It is usually served with sushi or sashimi. The spicy and sweet-sour flavor of pickled...

Ramen is a Japanese noodle and also a Far Eastern dish. It is made from wheat flour. Ramen is very popular in Asian cuisine. It can be prepared using instant...

If you’re anything like us, there’s every chance that you do everything you can...

Burgers are the ultimate comfort food, but although they’re all delicious, some...

Peaches are the very definition of summer; they’re sweet, juicy and deliciously...

How to Make Natural Food Coloring

We’ve all had a fair number of different adventures using food coloring, that’s...