What Is Calamari & How to Cook Squid?

Calamari is a fun way of adding seafood to your diet, but what is it? Here’s all you need to know about calamari. Yes, calamari is more than squid. 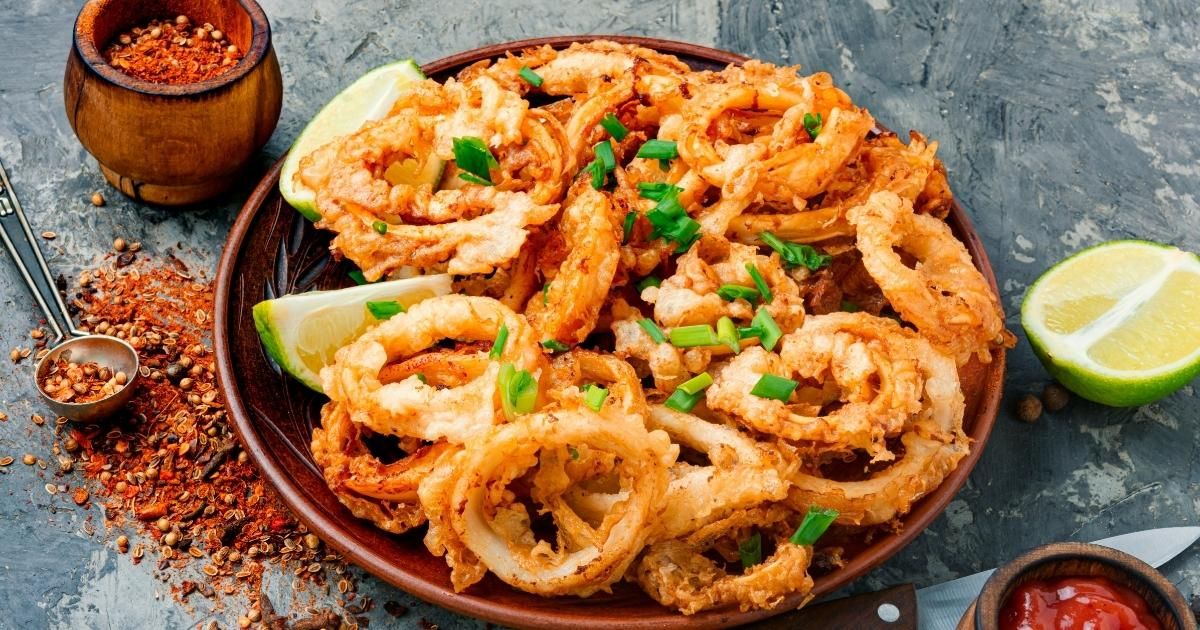 Calamari is much more than battered and fried squid rings. Calamari is delicious to many. We have to learn everything to enjoy it more. Here it is, our guide to calamari.

Calamari is an Italian term, and it means squid. Still, the name has taken different meanings. For example, calamari is often used to describe battered and fried squid rings in the US and other English-speaking countries. Apparently, calamari is just squid, but it’s much more than that.

Here’s all you need to know about squid, how it’s cooked around the world, and where it comes from. Let’s learn all there is about this slippery cephalopod. After all, it’s one of the tastiest foods from the sea, and it’s more versatile than you think!

Calamari is a culinary term in many countries. In Italy, it just means squid, and it’s not dissimilar to the Spanish name “calamar.” Squids are cephalopods, like octopuses; they have long bodies, large eyes, eight arms and two tentacles.

There are dozens of squid species, including the giant calamari, said to be responsible for sinking entire ships in the old days. The most common types of squid to make our tables are the Japanese flying squid, the Argentine shortfin squid and the Humboldt squid, but there are many others.

What all squids have in common is that they’re easy to add to our diets. Their bodies and tentacles can find their way to rice dishes, noodles, soups and many other meals — squid makes formidable salads and snacks as well? It seems squid can do it all!

How To Cook Calamari?

There are many ways to cook calamari. You can clean and stuff the squid body with other ingredients; you can cut it into rings or cook the tentacles. Even the squid’s ink is edible and used in many recipes. In fact, you can eat the entire squid except for the beak and an internal body part called gladius — these are both hard.

Perhaps the most popular way of cooking calamari is making battered and fried rings. For this recipe, clean the skid and cut the body into rings. Save the tentacles for another recipe. Marinate the calamari rings in buttermilk for a few hours and coat them with flour before deep-frying them.

Another easy way of cooking calamari is by adding them to your pasta sauce, along with your usual ingredients, including tomato paste, garlic, and perhaps other seafood! Ensure the calamari is cut thinly to prevent it from getting too tough. Tomato-based seafood pasta can be a lovely dish for memorable occasions.

The squid’s body is thin and firm and can become a lovely sea-scented steak. To make these beauties, cut the squid into a thin steak, score it with a knife and soak it in an acidic marinade to tenderize. Then, cook them on the grill over a high flame until fork-tender. Season with salt and pepper and serve with your favorite sauce or dip!

Calamari rings and tentacles can become a lovely ingredient in an Asian-inspired stir-fry, cooked over a high flame in a blistering wok. Toss the calamari with veggies, and season them with soy sauce or sticky teriyaki sauce. You might want to coat the calamari with flour before stir-frying to ensure a golden color and a crackly texture.

Sure, calamari can be hard to chew when not cooked right but slice it thinly and let an acidic marinade do its thing, and you won’t have to worry about chewy calamari.

Alternatively, Blanche the squid in boiling water for 2-3 minutes before cooking them any other way — that will tenderize the meat. Practice makes perfect, and your hard work will be well rewarded.

How To Serve Calamari?

How to serve calamari depends on what you do with it, but generally, you want to treat it like fish or any other seafood. Fried calamari is lovely with tartare sauce, but you can also serve it with a side of white rice or steamed veggies. After all, calamari is a protein, and it can become a myriad of dishes, all unique in a way.

In Japan, expect to see calamari served crispy as tempura or as part of sushi and sashimi platters. In China, squid is often stir-fried and tossed with noodles. Battering and frying squid rings is customary in the west, but you’ll also find it tossed in olive oil around the Mediterranean Basin.

In Russia, squid salad is made with calamari and tossed with mayonnaise, and that’s just the beginning. Sure, calamari is not the most common of ingredients, but it is more versatile than you think. Once you learn a few calamari recipes by heart, you’ll feel comfortable enough to try new recipes.

Add the calamari to your grocery list and cook with noble seafood. You can consume squid as a rich flavored and lean protein.

It is the most preferred hot appetizer dish of seafood tables with its soft inside and crispy exterior. You can make a delicious and healthy seafood calamari...

Lemon zest can turn a dish from good to great. It’s incredible what the fragrant...

Top 5 Hamburgers of the World

The history of Hamburger dates back to 1847, when it was presented to emigrants who...