Dogs will eat anything you throw their way, but some foods are really bad for them. See what toxic foods for dogs you should avoid. Take care of your pup! 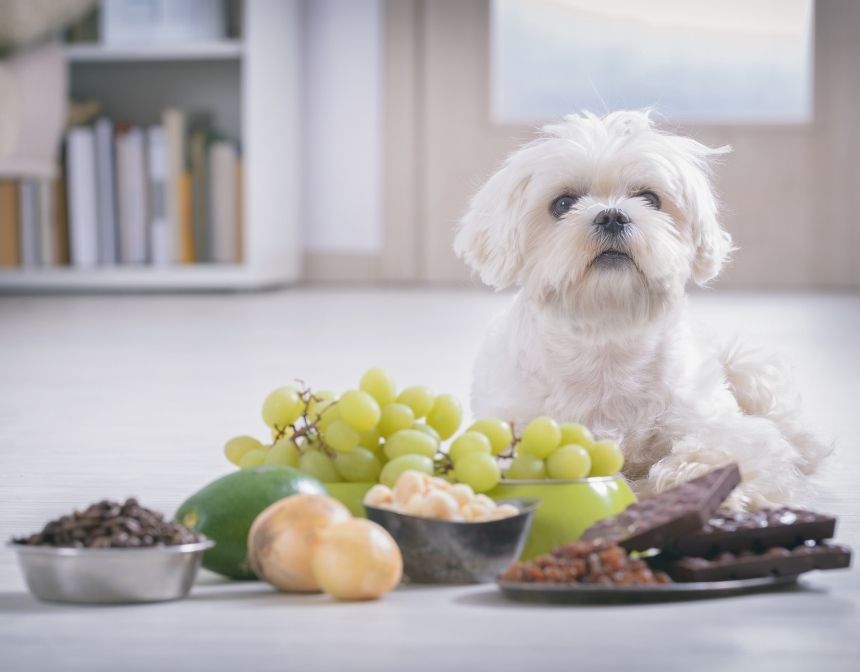 Dogs might be our best friends, and it’s not uncommon for us to share our food with them. The problem is some foods that are totally safe for us are dangerous foods for dogs. You might not even realize that you’re putting their health at risk! Here are 10 toxic foods for dogs you should avoid.

What Foods Are Toxic to Dogs?

Dogs can’t eat anything. Even common food we humans eat every day can be bad for our favorite pets. In fact, some foods that seem harmless are big no-no’s in a dog’s menu.

From bones to bacon, which we probably all give to our dogs from time to time, to some veggies, like onions and tomatoes — dogs react negatively to all these foods, and some can put them in real danger.

The thing is, dogs and humans evolved differently and have digestive systems adapted to entirely different diets. It’s easy to see why we simply can’t eat the same things! Here are some of the most important toxic foods for dogs.

Okay, this might be an obvious one, mainly because alcohol is also bad for human consumption! Still, we can at least digest alcohol in our livers with specialized enzymes — dogs don’t have those.

Dogs have less blood than we do, for starters, so even a few sips of beer will get your dog’s head spinning like crazy. Sadly, this can also lead to coma and even death from alcohol poisoning. No, it’s not funny to share a drink with your dog. It can be seriously dangerous.

An apple a day keeps the doctor away, right? Well, not for dogs. Although apples are an all-natural and overall healthy and nutritious fruit, they have downsides, particularly for dogs.

There’s cyanide in an apple’s seeds. And, yes, humans might not commonly eat those, dogs do. Cyanogenic glycosides in the seeds become cyanide in your dog’s system and lead to poisoning and a very uncomfortable death. Fruits might be good for you but keep them out of your dog’s reach.

Avocados are super healthy for humans; they’re legitimate superfoods with lots of healthy oils that can keep your cholesterol levels in check.

For dogs, a compound in avocados called persin can damage their circulatory system and heart. It will also cause stomach discomfort and vomiting. The large pit in the avocado is also hazardous for dogs, as they’ll swallow it whole, causing constipation and even blocked intestines — your dog might need surgery to remove it. No guacamole for your dog, sorry.

This one’s a bummer, but no, you can’t feed bacon to your dog — even if it’s its favorite food. In fact, all fatty foods lead to pancreatitis and have a more significant effect on small races.

Anything fatty, like deep-fried food, sausages, bacon and even rotisserie chicken skin, will lead to acute pancreatitis, and it comes with vomiting, diarrhea and intense abdominal pain. It comes without saying the dogs won’t enjoy these symptoms as much as they’ll enjoy their favorite fatty foods.

The worst part is that your dog might take bacon and similar foods just fine until one way it doesn’t.

Candy is both bad for our four-legged best friend and us. There’s just too much sugar in candy, and more than damaging your dog’s teeth, there are other risks involved.

Dogs don’t take sugar very well and are considered a poison for their species, especially if they contain a prevalent compound called xylitol. This molecule will damage your dog’s liver and can lead to death.

If you don’t want to put your dog in danger, don’t have candy around the house — that’s good advice, even for your own health!

Most dog owners know about this one, but if you don’t, know that chocolate is one of the worst things your dog can eat. They can even get a chocolate overdose, which causes dehydration, vomiting, tremors and even seizures.

Even a tiny chocolate can be the end for your dog, especially if it’s small. This goes for all types of chocolate and foods with chocolate, like cake frosting, so don’t let your dog anywhere near chocolate. And keep your stash well-hidden because dogs are curious little buddies.

Grapes and raisins, which are nothing more than dried grapes, are extremely dangerous for dogs. If your pet eats enough of them, it will need induced vomiting, stomach pumping and other aggressive treatments to eliminate them from its system.

Even a few ounces of grapes can put your dog in grave danger, and death is not uncommon on untreated dogs.

Grapes cause indigestion, stomach pain and eventually irreparable kidney damage, making them one of the most toxic foods for dogs. Never leave grapes lying around!

We’ve all heard that giving bones to dogs is okay. In fact, dogs should be used to munching on bones for the bits of meat stuck in them and the calcium.

Still, professionals suggest bones can be more harmful than good for dogs, especially if the bones are cooked. The bones become brittle, and they can break in splinters, which can hurt your dog’s mouth and digestive tract.

Raw bones are another story; as long as they aren’t too small or sharp, they’re a nice treat for your dog and a healthier alternative. In a nutshell, don’t feed cooked bones to your dog.

Onions have a curious bud deadly effect on dogs. Compounds in the bulbous veggie lead to anemia, damaging the dog’s red blood cells, responsible for carrying oxygen from its lungs to the rest of the body.

Onion poisoning causes your dog to feel short of oxygen, leading to more severe conditions that might even lead to death, especially if untreated.

The problem with onions is that they’re in almost all our meals, so giving your dog leftovers is never a good idea. Despite being less toxic, the same goes for garlic — it is toxic for your dog.

A compound in tomatoes called atropine has a unique effect on dogs — it causes dilated pupils followed by a dangerous irregular heartbeat and tremors.

The compound is not harmful to humans, but it can build up on your dog’s system, causing severe conditions. This lousy compound is commonly found in tomato stems and leaves, and it’s more common in unripe tomatoes. Ripe and juicy tomatoes are less of a problem — you should still avoid feeding your dog with them, though.

We talked about toxic foods for your dog. Well, have you taken a look at our recipes that you can easily give to your dogs?

Here are our some healthy dog food recipes:

Do you want to make easy cookies for your dog? Our Healthy Homemade Peanut Butter Dog Treats recipe is just for you!How about waking up your pathy family...

It's time to pamper your dog with our Homemade Vegetables Dog Food recipe!The best part of making homemade dog food is that you know what's inside the...

There are many kinds of pasta, flavored with various sauces that everyone loves.Shapes...