Seitan - A Great Meat Substitute That’s Worth The Effort

Seitan is a lesser-known Chinese meat substitute that’s made through a complicated process but is worth the delicious payoff at the end. 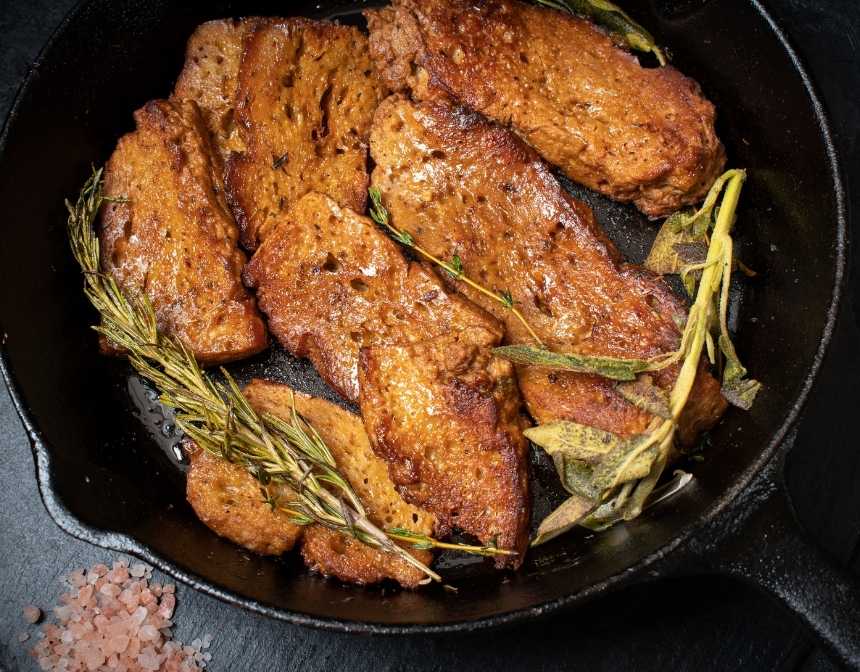 Seitan is a meat alternative that’s been traditionally made in China for an awfully long time. It’s often discounted for wholesale production as it is, essentially, made of gluten.

This means that a lot of people are automatically out when it’s on offer, turning off a lot more people. However, if you’re happy to eat gluten, I’d definitely recommend checking out seitan - it’s a great substitute that I can’t get enough of.

How To Make Seitan

Before we get into too much of the nitty-gritty of making seitan, I’d like to say something upfront: there are two ways to make seitan. On the one hand, you could use vital wheat gluten flour.

On the other hand, you could use more conventional flour and wash the starch away using Wash The Flour method. I’m going to be writing about Wash The Flour Method, as it’s more familiar to me, and it’s also much more customizable too.

To do that, you first need to make a very basic dough out of flour and water. To make one big batch of seitan, I’d recommend using six cups of flour and two cups of water. That isn’t a very hydrated dough, but that’s okay for now. Combine the flour and water to form one large ball of dough - the dough should be smooth and have no dry spots.

After your ball of dough has been soaking in the water for an hour, you’re ready to start the washing process.

Pour away the water that was covering your ball of dough, and then cover it once more with cool water from the tap. Knead the ball of dough while keeping it and your hands in the bowl of cold water. When the water is opaque, pour it away.

As a bit of a side note: you can keep the opaque water. That water is very high in starch content and can be used to make crepe-like pancakes which, when flavorings are added to the batter, makes a great vegan bacon substitute.

Next, pour warm water from the tap into the bowl with your dough, making sure to cover the highest point that the dough reaches. Again, knead the dough until the water is opaque. At this point you may notice your dough starting to tear apart while in the water, and that’s okay. That just means that your gluten chains haven’t developed yet - they will as you continue to knead.

Once you’ve poured away (either discarded or saved) the opaque water from your warm water pass, begin to alternate kneading with cold water and warm water. The reason that you’re alternating is that the temperature changes help to shrink and expand molecules within your dough, thus releasing starch more quickly. You could do all of the kneading rounds with cold water, but it would surely take a much longer amount of time.

Continue to carry out the kneading passes for as long as you’d like - the water will become less and less cloudy with time. After you’ve made a few batches of seitan, you’ll know what level of cloudiness you’re aiming for. Generally speaking, the more clear the water is after kneading, the chewier your end seitan will be. Of course, the ideal amount of chewiness is a matter of personal preference, and you’ll learn what you like with time. The general consensus is to stop kneading when the water is only slightly cloudy.

After you’ve finished the kneading process, it’s vital that you let your seitan rest for a moment. It needs roughly twenty minutes for the gluten strands within it to relax and rest, allowing for a better texture in the final seitan. If you’re planning to add spices to your seitan, then add them after a twenty-minute rest. Adding spices will allow you to create a meat substitute that tastes a little like chicken, beef, or pork. After adding spices, allow for another twenty-minute rest.

Finally, you need to knot and steam your seitan. Stretch your seitan dough into a long sausage, the size doesn’t matter too much, I just make it as long as my chopping board. Tie the dough in a knot so that the knot forms at the center. Continue tying knots with the dough until there isn’t enough dough left to form another knot. Place the whole assembly into a slow cooker, and pour vegetable broth over and around the seitan until the liquid level is roughly halfway up the side of the dough. Leave to simmer for two hours.

Finally, remove the seitan and allow it to come to room temperature before allowing it to rest in the fridge for eight hours - this step is optional but highly recommended for a denser texture. After chilling, you can cut and cook your seitan. Treat it as though it’s raw meat, adding spices and flavorings as you go.

Seitan is exceptionally healthy. It is very high in protein and minerals while also being very low in carbs and fat - making it a great vegan-friendly meat substitute. Additionally, it’s a great replacement for meat as you’re cutting out all of the processing that makes meat unhealthy.

It has long been established that red meat is bad for you due to the processing during manufacture. By making your own seitan at home, you’re completely cutting out those bad ingredients and practices.

If you like the healthy living, check out these delicious healthy recipes

Vegan waffles are soft on the inside and crispy on the outside, making them ideal for savory or sweet flavors! You can also make this recipe gluten-free...

If you are a vegan, you love pasta, and you need some protein, this dish is perfect for you. One of our favorite vegan on Instagram, Charlotte (@veganveggieview)...

Ratatouille is one of the traditional flavors of French cuisine. It is an indispensable dish for vegetarians and dieters as it is a vegetable dish.Do you...

Green Detox Water recipe, a delicious detox water that cleanses the body from toxins, is a drink rich in nutritional value. It is a delicious and healthy...

Vegetable soups are those that are frequently preferred by people who eat healthy and regular food. Besides its flavor, its high nutritional value plays...

With just four ingredients, you'll be amazed at how incredibly rich and satisfying this flavor is.Thanks to the dates found in gluten-free and vegan brownie,...

Fusion cuisine is made of bits and pieces of different cultures. Ingredients and...

There’s more than one type of rice. In fact, there are more than you can count!...