10+ Best Types of Pumpkins and Their Uses

These are the ten best types of pumpkins to cook this holiday season. Large or small, green, yellow or orange, all these pumpkins are unique and quite lovely. 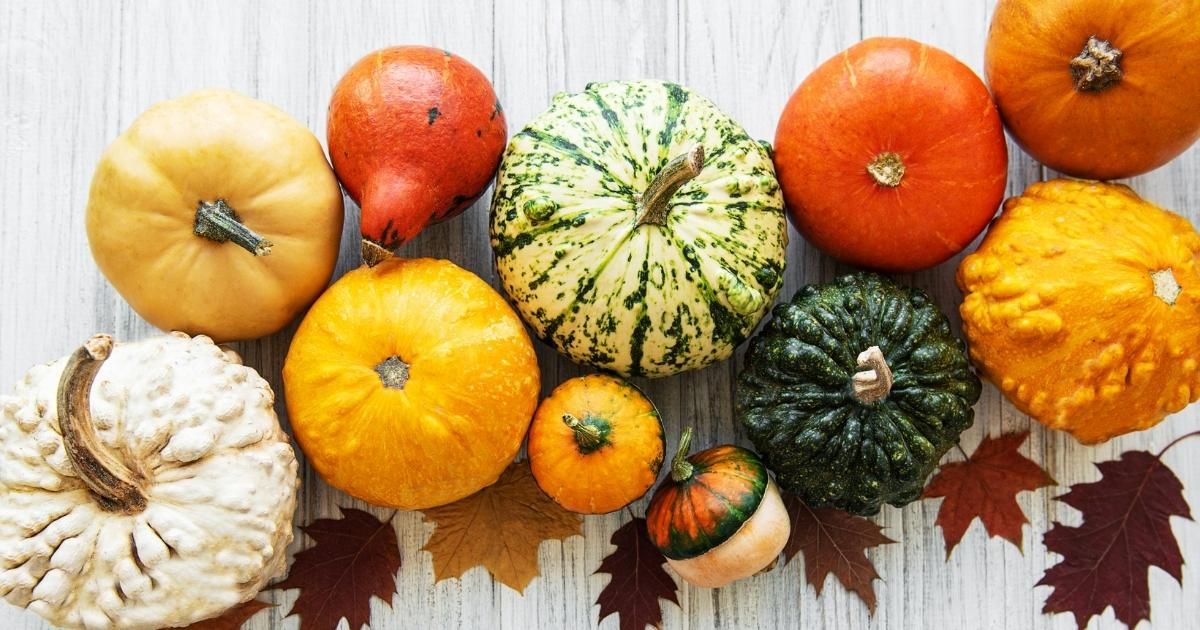 Pumpkins are an all-American-fruit that we all enjoy during the holiday season. Pumpkins, though, come in all shapes and sizes. And although they’re all wonderful, they all have different uses.

These are the ten best types of pumpkins. Get to know them and add them to your cooking! There’s nothing pumpkins can’t do!

What Are The Types Of Pumpkins?

All pumpkins are a type of squash, and they’re the fruit or crawling vines. There are over thirty pumpkins cultivated commercially around the world, and most of them are known as winter squash because the fruit grows during the coldest months of the year.

These are the ten best types of pumpkins to know and how to use them. There’s a pumpkin or squash for every recipe, so choose carefully. By the way, you’ll love them all.

All pumpkins are a type of squash, but the most famous squash is the butternut squash. Beautifully nutty, sweet and firm, this is definitely the most versatile type of fall and winter pumpkin.

The butternut squash has an elongated shape with a belly, and its skin is thin and easy to peel. What’s left is an abundant, orange-colored flesh that can play a role in sweet and savory dishes.

Roasting butternut squash before cooking is a good idea, as the heat enhances the squash’s flavor and brings out its sweetness. Then you can add it to soups, stews or baking treats. The sky’s the limit!

Hokkaido Pumpkin is one of the most popular pumpkin varieties. Also known as red kuri squash, this winter squash has a slightly nutty flavor reminiscent of chestnut. With its juicy flesh, it is used in many recipes from soups to stews, from curries to baked goods. It also has the ideal hardness for making bread, cakes or pies. This pumpkin, which is small or medium in size, can be consumed with a stuffed or roasted pumpkin.

Thanks to its creamy texture, it helps you to prepare delicious meals. Add this orange- colored winter squash to your shopping list.

Let’s start our list with some of the prettiest pumpkins out there. The Jack-be-little pumpkins are perfect for miniature jack-o’-lanterns and decorated baskets. They’re just too cute.

Still, you can also enjoy the pulp hidden inside these tiny pumpkins, and it’s pretty sweet. Of course, don’t expect much pulp out of them, but, yes, jack-be-little pumpkins are edible. They made our list precisely because we’d love to see more people buying these for the kitchen instead of for decorating!

Why not do both? Make pumpkin pie filling and fill these small pumpkins with it. They’re the perfect seasonal vessel for all kinds of tasty treats.

The Jarrahdale is one of the most stunning blue or gray pumpkins. Weighing between 12-18 pounds, these are fantastic to bring balance to decorations and are among the most highly regarded heirloom pumpkins in America.

The flesh in these pumpkins is orange, and it’s considered a gourmet delicacy. Jarrahdales are incredibly sweet, so they’re perfect for making pies. You can also use these gray pumpkins to add color to stews and soups, as the pulp is quite firm. It roasts beautifully as well! If you hate stringy pumpkin, you’ll love Jarrahdales; the flesh is not stringy at all.

These big, round, orange pumpkins look just like the ones used to make Cinderella’s carriage. They’re actually called Rouge Vif D’ Etampes, and its name appeals to the pumpkin’s almost red color. Originally from France, these pumpkins have been used globally since the 19th century — they’re also known as soup pumpkins, and it’s for their versatile uses in the kitchen.

Cinderella pumpkins make a great purée, but you can also dice and ground their flesh to make sweet chutneys and preserves. On the savory side, this pretty pumpkin can give life to soups and stews, although they have high water content and might break down if overcooked.

Not the prettiest of pumpkins, the Galeux d’Eysines is one of the sweetest pumpkins in the world. This gnarly looking, large and round pumpkin is also known as peanut pumpkin since peanut-sized warts grow on its surface. Actually, the sugar causes the pumpkin’s warts as it leaches through the pumpkin’s thick skin.

If you’re looking for a pumpkin to roast, grill or bake, this one’s for you. The fleshy pumpkin has lots of room for sweet or savory fillings, and it’s the right size to fit into a conventional oven. You can also puree Galeaux pumpkins with sweet and silky results.

These ghouly pumpkins are as white as a ghost and are pretty popular for decorating pumpkin arrangements. Few pumpkins are prettier than this one, that’s for sure. Still, Casper pumpkins are amongst the best to cook with; their flesh is sweet, deep-orange hued and smooth. Casper pumpkins are often used in sweet and savory preparations, from meaty stews to sweet pumpkin puree and pie fillings.

Sautéed Casper pumpkins make a fantastic seasonal side dish and go well with other vegetables. The pumpkin’s dark flesh is not only striking but versatile. In fact, Casper pumpkins are amongst the most versatile in the kitchen.

This one’s a classic. Dickinson pumpkins are an heirloom variety commonly used in pie fillings, and it’s easy to see why. These elongated pumpkins have pronounced ribs but lots of clean, firm flesh. Regularly, Dickinsons weigh between 10-14 pounds, so they have an excellent yield.

Dickinsons have been used for centuries to make pies, and traditionalists won’t use any other variety. Most commercial pie fillings are also made with this tall, beautiful pumpkin. Although not as sweet, Dickinsons are reliable and consistent compared to other varieties, and that’s just what you need to make pie. You can always sweeten the filling later.

Since this variety is easy to grow and weighs only 2-3 pounds, sugar pies are easy to have in the backyard, and you can manage them quite easily as well. The pumpkin’s seeds are also popular when roasted, so sugar pies have many uses.

Although these pumpkins have a sweet name, they’re not particularly sweet, so you’re better off roasting them before cooking to bring out that sweetness.

This French pumpkin variety is also known as Musquée de Provence and is an authentic heirloom. With pronounced ribs, these are easy to spot, and their fine-grained flesh is perfect for baking; the pulp doesn’t fall apart and retains desirable moisture and sweetness.

Widely used as decoration, you don’t want to miss the opportunity of cooking fairytale pumpkins. You can use them in sweet and savory recipes roasted, baked or stewed. These aren’t all that sweet, but they have an affinity for winter spices and brown sugar. You can also boil fairytale flesh and mash it into a succulent puree.

This one is another favorite, especially among those looking for pumpkins that are not too stringy. The Long Island cheese pumpkin is one of the oldest pumpkins still around, and they’re called that way because they’re flat like cheese wheels — they don’t taste cheesy at all.

This variety was once actually popular in Long Island, and it’s a popular fall pumpkin. Today it’s grown everywhere, even in people’s backyards — the variety is easy to grow and very noble. To cook with this varietal, treat it just like butternut squash; it’s pretty similar in flavor and texture, but it has a brighter color, so it has a more significant impact on the plate.

There’s A Pumpkin for All Occasions!

There’s no doubt pumpkin varieties are different in shape, color and size. This incredible family of seasonal fruits really has something for everyone.

From pumpkins that are perfect for holiday decorations to the source of the tastiest pie fillings, pumpkins are fun to get to know. You’ll surely find the right pumpkin for your project; just keep on looking. And once you find your favorite ones, never let them go.

Learning about pumpkins will open a world of possibilities in the kitchen and at your craft table! What are your favorite types of pumpkins?

Pumpkin pie is a spicy, custard-filled dessert. On Thanksgiving and other special occasions, it is a very popular dessert prepared in America and Canada....

Isn’t it wonderful to go beyond the familiar flavors and discover different recipes from time to time? But it is always difficult to change or revise...

For a quick and energetic start to the day, you should give a chance to a very delicious pumpkin smoothie.

Undoubtedly, desserts are one of the flavors we cannot give up. Desserts, which people especially have trouble saying "no" to, are an incredible family...

While the nuts inside give you energy, it is a dessert that seduces you with its flavor.

Food is great, and so is wine - we will never try to contradict that. The thing that...

What Is The Flexitarian Diet?

You’ve probably heard about vegans and vegetarians, but these are not the only...