This raclette recipe is all you need to make the perfect show-stopping raclette at your next dinner party. Fun cooking takes very little time. It can be incredibly filling, depending on what you add to the recipe.

And while raclette is traditionally considered a winter food, there is literally no reason not to enjoy it with friends and family all year round. Especially when taking into account how delicious it is. 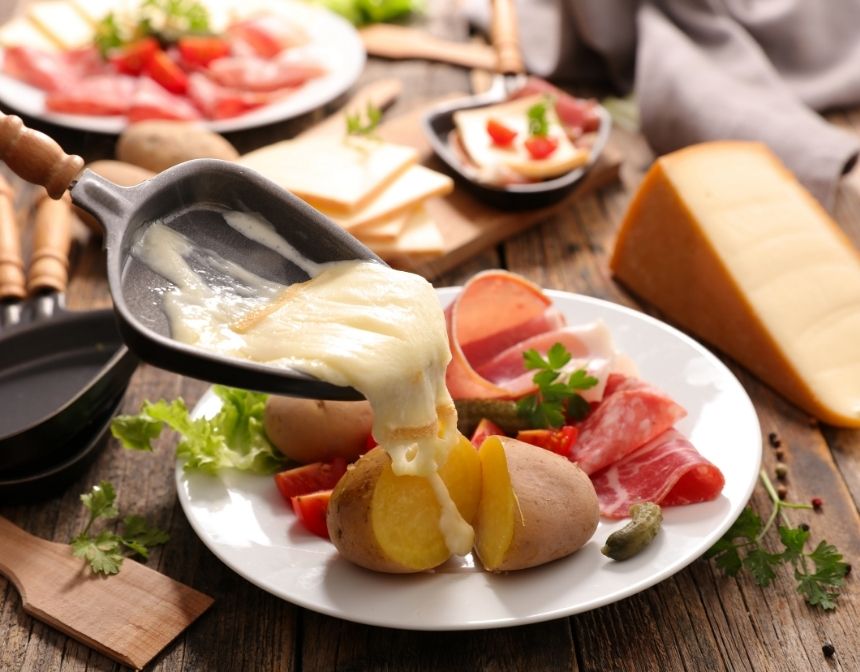 Raclette is a Swiss dish made with melted raclette cheese, a type of semi-hard cheese typically made from cow's milk and used for grilling and melting. This dish consists of melted cheese served over boiled and sliced potatoes, grilled vegetables, meat, etc., and has many different variations.

French raclette is slightly different from Swiss raclette in that it is softer with a smoother, creamier flavor. This raclette recipe employs the French version and is made with several different ingredients like potatoes, bacon, beef, sausages, zucchini, capsicum, cornichons, and pickled baby corn. The end result is sweet, sour, and salty, with a hint of pungent nuttiness from the cheese.

How to Melt Raclette Cheese?

There are many ways to melt raclette cheese. You can melt it using a raclette grill as described above, use a hot pot stove, or employ a special Raclette cheese melter. Raclette cubes can also be melted in the microwave by heating them at one-minute intervals on medium heat.

You can also melt raclette over the stove by cutting the cheese into quarter-inch slices and adding them in a single layer to a cast-iron skillet rubbed with vegetable oil. Cover and cook for about 5 minutes on low heat till cheese is properly melted.

What to Serve with Raclette?

Raclette potatoes are the most common traditional way of enjoying Raclette, but other vegetables, pickled items, and meats are also usual sides.

Raclette can also be served with beef fillets, cream cheese stuffed mushrooms, and prosciutto-wrapped asparagus for a fancier dinner feel. And if you're not the biggest fan of grilled meat and sausages, you can go for something more traditional and serve your raclette with a plate of charcuterie or cold cuts like salami, bratwurst bites, ham, prosciutto, and other deli meats.

Here are some our delicious recipes that you can serve with Raclette:

How to Store Raclette?

Raclette cheese can be stored in the refrigerator for about six weeks or frozen for up to three months. To freeze your raclette without affecting flavor and texture, tightly wrap hand-sized blocks of cheese in plastic wrap and store.

You can also freeze raclette by coarsely grating the cheese block into an airtight ziplock bag and sealing with all the air pushed out.

A must-have for Thanksgiving, the crown of the table. Practical and easy baked turkey...

Who doesn’t love Nando’s peri peri chicken? It’s spicy, garlicky, and has that...

If you love both beef and Korean culture, then this Korean beef bulgogi is for you....

Chili Con Carne, one of the traditional dishes of Mexican cuisine, is a spicy, hearty...

Branzino or Branzini is a type of white fish. It is also known as 'Mediterranean...