Greece is the home of many beautiful things. From its deep history to the ancient ruins to the beautiful waters of the Mediterranean. With this Greek salad recipe, you are able to bring a little bit of Greece to your home and enjoy all it has to offer.

The Greek salad or horiatiki salad is a beautiful symbol of what the Greek countryside has to offer. Believe it or not this dish is not that old. It was brought about in the 1960s or 70s and added to menus for the American tourists but has now become a staple in Greek cuisine.

This recipe will show you everything that the beautiful country of Greece has to offer. It is the perfect thing to bring to a summertime barbeque or even on a nice picnic or hike. No matter where you enjoy this Greek salad you will feel as if you are enjoying it in a Greek café. 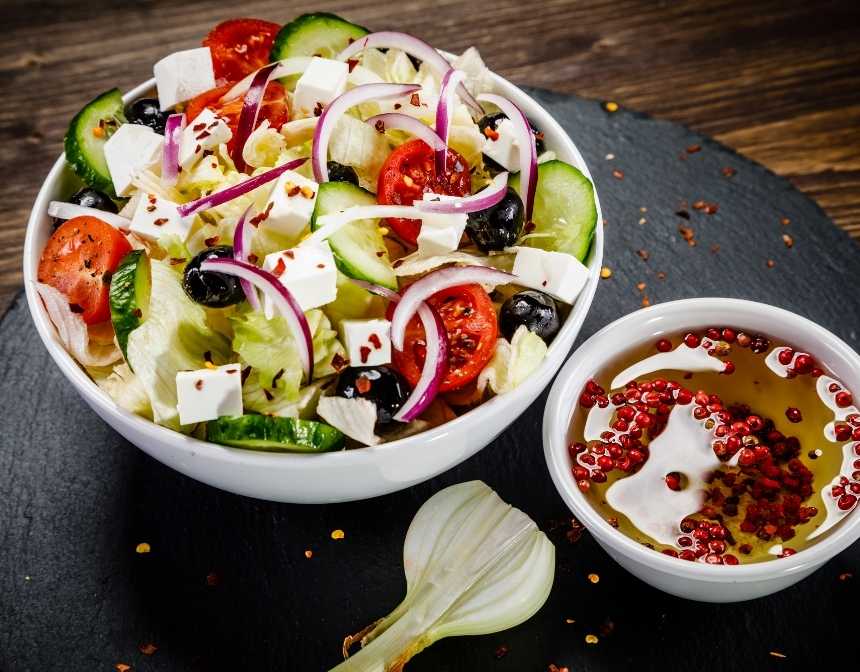 What other ingredients can you add to Greek salad?

Just like any salad you can add pretty much anything you want to a Greek salad. One thing you could add to this is some lettuce.

It might not technically be a Greek salad after that but go right ahead. Other things you could add instead are some avocado, nuts, fruits, legumes, or some pita chips. The sky's the limit with what you can add to your Greek salad to make it your own.

What is Greek salad dressing made of?

A traditional Greek salad dressing is really a Greek vinaigrette as it contains olive oil, red wine vinegar, lemon juice, some dill, minced garlic cloves, dried oregano and salt and pepper. There are some recipes that call for you to put some caper juice and capers in the dressing instead of the salt. OR if you are feeling adventurous, try adding an anchovy or just some juice as it adds a deep salty flavor.

Greek Salad in Greece is often called a Village Salad or horiatiki salad. It typically has cucumbers, tomatoes, onions, Kalamata olives, green pepper, and Feta with a dressing made from olive oil and vinegar or lemon juice. It is usually seasoned with a little dried oregano, but no lettuce.

Greek salad is low-calorie and nutrient-dense, also providing you with a healthy dose of vitamins A and C, as well as potassium and iron. It also contains phytonutrients and antioxidants, which reduces the risk of health problems such as heart disease and cancer.

What do they call Greek salad in Greece?

Greek salad or as the locals call it, horiatiki salad, is popular in Greek cuisine generally made with pieces of tomatoes, cucumbers, onion, feta cheese, and olives. It is usually dressed with salt, pepper, Greek oregano, and olive oil. Common additions include green bell pepper slices or caper berries. Greek salad is often imagined as a farmer's breakfast or lunch, as its ingredients resemble those that a Greek farmer might have on hand.

Quinoa is very popular in United States. It is a healthy, high protein grain that...

Black eyed bean is a complete source of potassium. It lowers cholesterol. It is a...

This delicious Chickpea Cheese Salad is made with chickpeas, the main food source...

Buckwheat and Arugula Salad with Cashews

Salad is one of the indispensable elements of any cuisine. Although it varies according...