How to Make the Best Philly Cheesesteak Recipe

A hoagie roll filled with thinly sliced beefsteak and melted cheese, the fast food classic, originating in Philadelphia, is served hot throughout America.

Philadelphia is famous for the Liberty Bell, Rocky and, most significantly, the Philly cheesesteak. A simple sandwich invented by Pat and Harry Olivieri in 1930 at their family hot-dog stand in South Philadelphia

The Philly cheesesteak recipe began modestly, one day Pat fancied some variety to his usual hot dog lunch and decided on some grilled chopped meat served in an Italian roll then topped with caramelised onions.

A frequent customer, noticing Pat’s new lunch, requested one for themselves and so the craze began, with the addition of cheese a few years later. After almost 90 years of trading the Olivieri family still run their sandwich shop, now named ‘Pat’s King of Steaks’ serving the original Philadelphia cheesesteak. 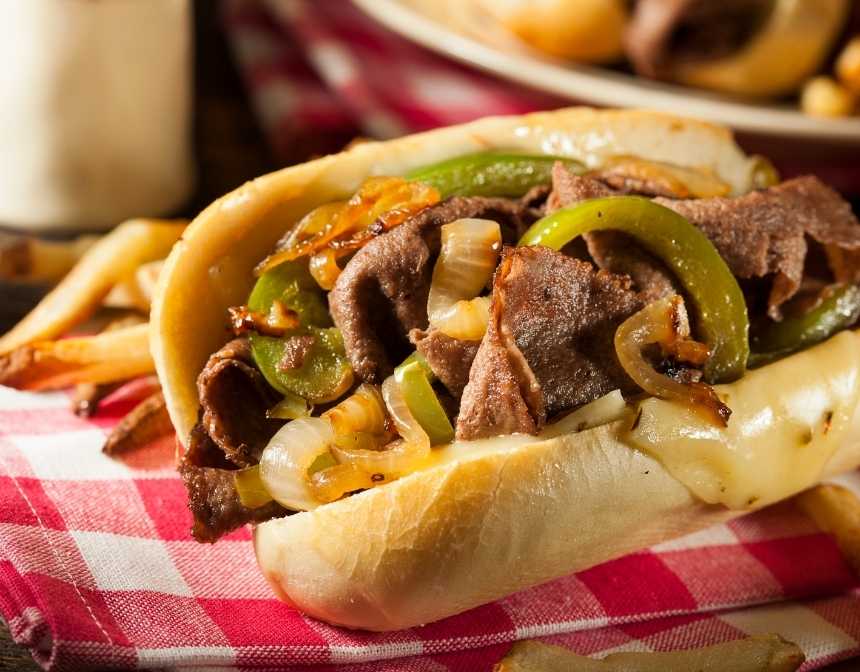 What is a Philly Cheesesteak?

Thinly sliced ribeye steak, melted cheese and a long crusty roll make up the comfort food classic sandwich that is the Philly Cheesesteak. Named after it’s birthplace of Philadelphia in Pennsylvania, USA which is colloquially referred to as Philly. The classic version of the Philly cheesesteak recipe has the option of either with (wit) or without (wit-out) onions, as they say in Philly.

What to serve with Philly Cheesesteak?

When creating a homemade Philly cheesesteak serve with french fries, onion rings or chips for the complete experience. The dish is a glorified sandwich and should be served casually with other comfort food dishes, especially when watching sports.

What cut of beef should I use for Philly Cheesesteak?

Traditional Philadelphia Cheesesteak uses ribeye steak as the beef within the sandwich. Ribeye steak is marbled and tender with the fat content contributing to the flavor of the dish, the meat is cut very thin then seared over high heat until crisp and browned.

The griddle or flat top which is used in sandwich shops to cook the beef imparts a distinctive flavour, this can be replicated at home using a cast iron pan and beef fat. As an alternative to ribeye steak, use flank steak, a more affordable cut of meat which is tender when seared quickly and sliced against the grain.

What’s the difference between a cheesesteak and a Philly cheesesteak?

A REAL homemade Philly cheesesteak recipe requires a few keys steps which takes this dish beyond a regular steak and cheese sandwich. The three essential ingredients are steak, melted cheese and bread or to be specific ribeye steak, provolone cheese and a crusty bread roll.

The bun soaks up the beef fat, steak and cheese to make an irresistible sandwich which has become a cultural classic. Differences between a standard cheesesteak or cheese and steak sandwich and the Philly cheesesteak come from the ingredients and preparation.

The cheese within a Philly cheesesteak is up for debate, from an option of Cheez Whiz, American cheese or provolone cheese. Cheez Whiz is the classic whereas provolone tends to be the most popular, as long as the cheese melts providing the “drip” factor it is acceptable. Additional toppings to the Philly cheesesteak which are served throughout Philadelphia include saute mushrooms, sweet peppers, hot peppers, fried onions and ketchup.

The sandwich is a cheesesteak rather than a Philly cheesesteak if; the cheese isn't melted, the meat isn’t ribeye steak, the ribeye isn’t thinly sliced or chopped or if the sandwich is served in any bread other than an Italian roll or hoagie roll. Often everyday cheesesteaks are available with a wider variety of additions and substitutions such as mayonnaise, lettuce, tomato, olives, hot sauce or pickles.

Heat the pan and put in sunflower oil.Wash in hot water, strain the ground beef....

Dalyan Meatballs is a baked or smoked ground meat dish prepared in the form of a...

When it comes to Risotto then what we get in our mind is a creamy dish that is delightfully...

Tacos are famous worldwide, not just in Mexico. Of course, its unique simplicity...

Sometimes you want to pamper yourself with something tasty and feel like in an expensive...