This dairy-free white chocolate almond bark is one of the easiest vegan dessert recipes you could ask for! A holiday classic, it is super customizable with a strong almond flavor!

Unlike other vegan white chocolate bark recipes, this recipe uses homemade dairy-free white chocolate to allow you to avoid preservatives and artificial flavorings and make almond bark of the highest quality.

The resulting white chocolate almond bark is crunchy and sweet, with just the right amount of nuttiness to balance everything out, making it a definite crowd favorite. 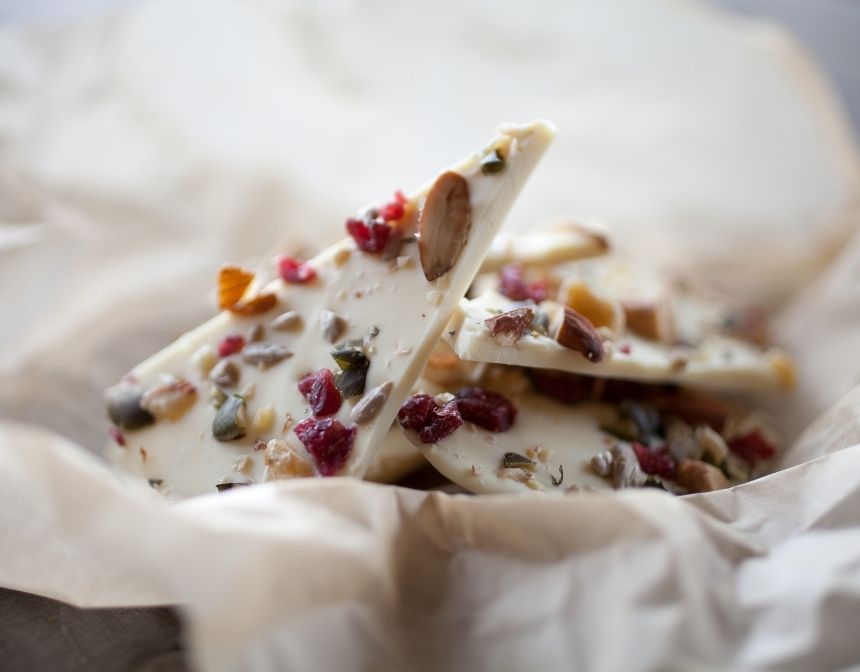 What Is Almond Bark?

Almond bark is a confectionery made with chocolate and toasted almonds that looks like a 'bark' of chocolate with almonds set in it. The candy likely originated sometime in the 1900s and has been a popular holiday treat ever since.

Yes, absolutely. Almond bark ingredients include food-grade cocoa butter, unrefined coconut oil, powdered sugar, vanilla extract, and toasted almonds, all of which are naturally gluten-free and make almond bark a suitable dessert for those with gluten intolerance or allergy.

How to Melt Almond Bark?

Almond bark can be melted on the stovetop in a double boiler. If you don't have a double boiler, fill one-third of a skillet with water and heat it on medium heat. Place another slightly larger bowl made of stainless steel on top of the skillet and add some pieces of almond bark to it. Stir with a wooden spoon to speed up the melting process, and remove from heat once the bark is fully melted.

How to Use Almond Bark?

White almond bark can be enjoyed as is, but it can also be used to make chocolate almond bark cookies, turned into fudge, or melted and coated over treats like strawberries, Oreo cookies, and peanut butter filled Ritz crackers. You can also serve with coffee or tea.

Here are our some delicious recipes you can use with Almond Bark:

Consume bananas as chips. The uniquely delicious banana will come together with different...

It is sometimes difficult to produce snacks for vegan diets. But with some creative...

Do you want to make easy cookies for your dog? Our Healthy Homemade Peanut Butter...

The Cuban Sandwich, also known as the Cubano, is an American sandwich. It is prepared...

Kimchi, a traditional flavor, strengthens the immune system. There are versions prepared...