A spiced beef broth of noodles garnished with a hard-boiled egg and stewed beef originating in the United States from Creole and Chinese culinary influences.

Yaka mein is simple comfort food, recreating an Asian noodle broth to suit New Orleans ingredients and palate. The dish is the kind of recipe which is passed through generations rather than cookbooks, with every household having their own variation and secret Creole seasoning.

For this recipe follow our guide for homemade Creole seasoning or use a ready shop-bought blend. The resulting bold noodle soup is spicy, salty and fragrant while being inexpensive and quick to prepare. 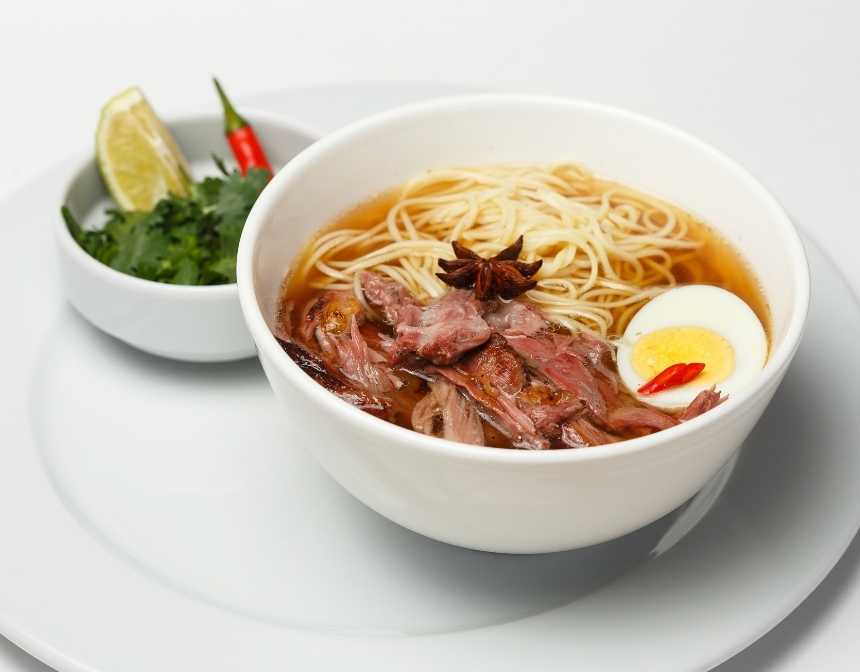 Cutting Board
Buy on Amazon
Advertisement

Where Can I Buy Yakamein?

Yakamein is a family dish, popular through the African-American community and can be found throughout New Orleans at small mom-and-pop restaurants. Further out than the city the dish is fairly unknown as it is one of New Orleans best-kept secrets, so the easiest way to experience yakamein noodles for yourself is to follow our simple homemade recipe for yourself.

The soup is also known as ‘New Orleans old sober soup’, named for its use as a hangover cure thanks to the dish's rich and satisfying properties. Yakamein is a complete meal providing noodles, broth, meat, egg and vegetable garnish all within one bowl. The base of the broth is a delicious meatiness which is then heightened by a combination of spicy, savory, sweet and salt flavorings. The flavors and simplicity of yakamein noodles make this dish a recipe that you will keep returning to.

The dish originates in New Orleans as a culmination of Chinese and Creole traditions. The base of the dish is a Chinese soup made from a soy-salty broth which is then seasoned with a blend of Cajun or Creole seasoning. Bringing together elements of many cultures yakamein uses ingredients such as Creole seasoning, spaghetti noodles, hot sauce and ketchup which are not traditional to Chinese cuisine and show the adaptation of the recipe using ingredients which are familiar and loved by the local community.

There are conflicting stories of what brought yakamein noodles to New Orleans with two main origin stories. One belief is that the noodle broth was introduced through Chinese immigrants who were brought to New Orleans to build railroads and work the sugar plantations. The second theory is that returning African-American soldiers from the Korean war created a demand for the food they had become exposed to in Asia. No matter the origin yakamein is here to stay and has become a classic staple throughout New Orleans.

Vegetable soup is made by boiling fresh and seasonal vegetables such as carrots,...

Isn’t it wonderful to go beyond the familiar flavors and discover different recipes...

Italian Minestrone soup is a nutritious meal that will satisfy your soul and stomach...

Corn soup is among the delicious and healthy soups. This soup recipe, which you can...

To make the best cream of mushroom soup, all you need is some extra virgin olive...