Legumes are excellent sources of protein, vitamins and minerals; they’re tasty and versatile. too. Learn all about the types of legumes. 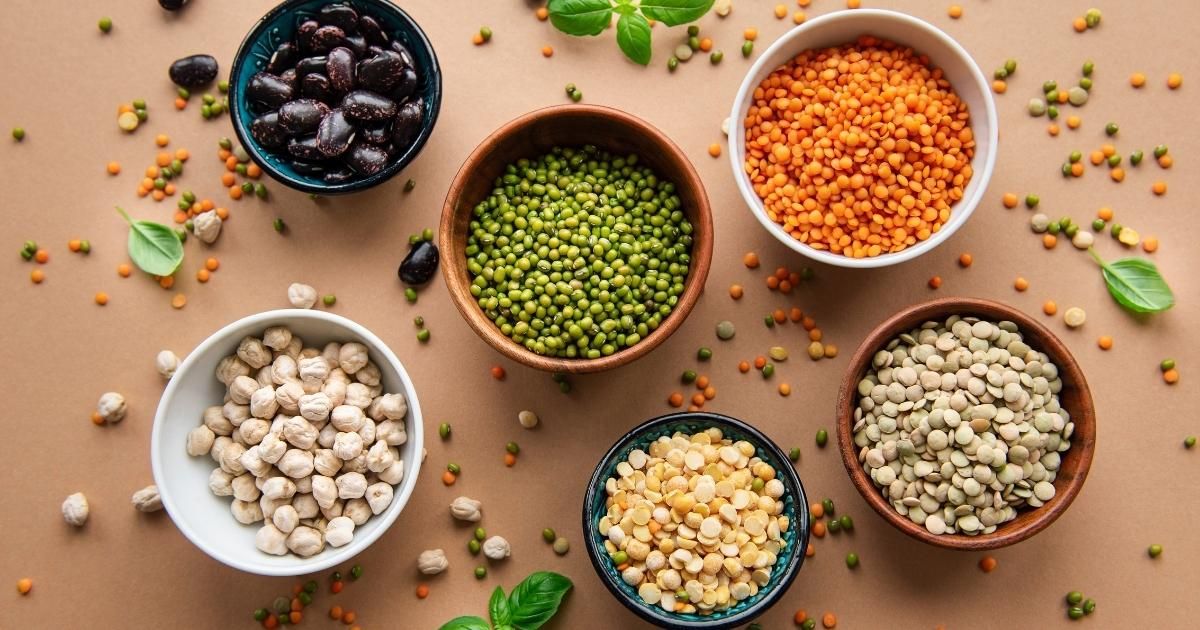 There are many types of legumes, and they can all become the key ingredient in any meal. The nutritious and tasty food family is versatile too. Every country has adopted one or several legumes in their daily menu.

These are the types of legumes and how to cook with them. There’s a legume for every recipe, and they’re essential in plant-based diets, so getting to know them pays off!

What Are The Different Types of Legumes?

Legumes are a family of plants that produce unique seeds, also known as legumes. Peanuts, soybeans, chickpeas and beans are just a few examples, but we enjoy several dozen types of legumes worldwide.

Legumes are prized for their flavor, but also their nutrition — they’re the best source of protein in the plant kingdom. Of course, they’re all healthy alternatives to meat, which has made the food category more popular than ever. These are the types of legumes.

10 Types of Legumes & How To Use Them

Learn about different types of legumes, from lentils to various types of beans, and how to cook with them!

Lentils are small, lens-shaped legumes that grow in pods. They’re a staple in India, where they become rich stews, soups, and curries. Still, lentils are immensely popular worldwide.

There are at least a dozen types of lentils, often of different colors and sizes, but they’re all cooked the same way, low and slow over a medium flame until tender. Then you can eat them as-is or blend them for a creamy gravy.

Contrary to common belief, peanuts are not nuts, but legumes. They’re native to South America, where they play a critical role in sweet and savory foods. This is one of the most common legumes, as people enjoy peanuts as snacks, in candy bars, as a creamy spread, and as a topping for savory dishes like Pad Thai.

Peanuts come in a crackly shell, and they’re covered with a nutritious seed coat. You’ll find peanuts whole or thoroughly stripped. Boil or roast them, eat them straight from the shell, or add peanut oil to your diet!

Soybeans are a staple in East Asia, where they’re consumed steamed or pan-fried in numerous recipes. Still, what’s most interesting about this legume is its versatility. People use soybeans to make soy milk, soy sauce, flour, soybean oil and tofu. There are dozens of uses for the prevalent legume.

Enjoy a soy ice cream, soy yogurt or treat yourself to a vegetarian burger patty made with mashed roasted soybeans. This is one of the most commonly consumed legumes worldwide, and many of your favorite food items are made with it.

Chickpeas, the round-shaped legume is high in protein, and its flavor is mild. Adding chickpeas to stews and soups is not uncommon, but the legume is also pureed to become hummus. Chickpea flour has its uses, too, including making falafel.

Other than that, chickpeas can be roasted and turned into delicious snacks, and they can play a role in salads, stews and curries. Interestingly, chickpeas preserved in sweet syrup are a popular dessert in the Philippines!

Green beans are a unique type of legume—they’re the unripe pods of various kinds of beans and peas and are consumed before the beans, tucked tightly inside the green pods, ripen and harden.

These unripe pea pods can be firm or tender. Generally, when talking about green beans, we talk about the varieties with a pod soft enough to be enjoyed whole.

Green beans can make their way into stews and casseroles; you can toss them with rice or puree them to make sauces. Green beans are also fantastic savory snacks.

Also known as broad beans, fava beans are amongst the most flavorful types of legumes. As the name suggests, this legume is large and broad, and although it was first cultivated somewhere around the Mediterranean Basin, they’re now consumed worldwide.

People prize fava beans for their earthy flavor. You can toast them or boil them, eat them whole or pureed. Few legumes have such an immense significance on all five continents. Nutrition-wise, fava beans are also unmatched; they are the legume with the highest protein-to-carbohydrate ratio.

There are over 40,000 types of beans globally, making them the most extensive legume. And although many of these types of beans are widely consumed, one of the most commercially available is the kidney bean.

These red-hued beans are starchy, and they’re shaped like kidneys. The red kidney beans and the speckled kidney beans are the most common, and they’re often pressure cooked and served as-is or mashed. Beans are an essential source of proteins, mainly in Latin America. Needless to say, the meaty legume is incredibly nutritious.

Cannellini beans are kidney beans, also known as white beans. These are typical in Italy, mainly in Tuscany, but they’re widely consumed on the Indian subcontinent as well.

Split peas are dried, peeled, and split peas. It is more common than regular fresh peas as they have a longer shelf life. Of course, split peas are also more flavorful than fresh peas, so they can become rich soups and colorful purees.

Yellow split peas are a typical snack as well, but people use them to make pudding as well. Sweet and savory dishes rely on the flavorful legume worldwide, from the Caribbean to the Greek islands. And if you ever tried the famous Indian dal, chances are it was made with split peas and not lentils.

This medium-sized legume is consumed worldwide, and it’s easy to distinguish for its black specks. These black-eyed peas were domesticated in Africa, but they found themselves feeling at home in America as well. This type of legume is common in classic American dishes like the Hoppin’ John, but you can enjoy them like any other bean — in soups, salads, stews, and broths.

Cabbage Soup is a vegetable soup made with cabbage, various vegetables and spices. This soup recipe, which is usually enriched with vegetables such as...

Prepare for a delicious and healthy burger feast at home instead of buying it. The burger recipe that is both practical and delicious: Vegan Lentil Mushroom...

Green Curry Chicken is one of the most popular dishes in Thai cuisine. Although green curry is usually made with chicken or beef, it can also be made with...

In America, when it comes to Thanksgiving sides or a company potluck there is one dish that you will most definitely find, a green bean casserole. This...

Tuscan Bean Soup, also known as Ribollita, is traditional all over Italy. This simple bean soup is excellent, if you're looking for a hearty meal that's...

Chili Con Carne, one of the traditional dishes of Mexican cuisine, is a spicy, hearty classic. This easy-to-make recipe is originally made with beef. However,...

It’s hard to beat butter. After all, it’s a delicious, silky ingredient that...