Types of Legumes & How To Cook Them?

Legumes are excellent sources of protein, vitamins and minerals; they’re tasty and versatile. too. Learn all about the types of legumes. 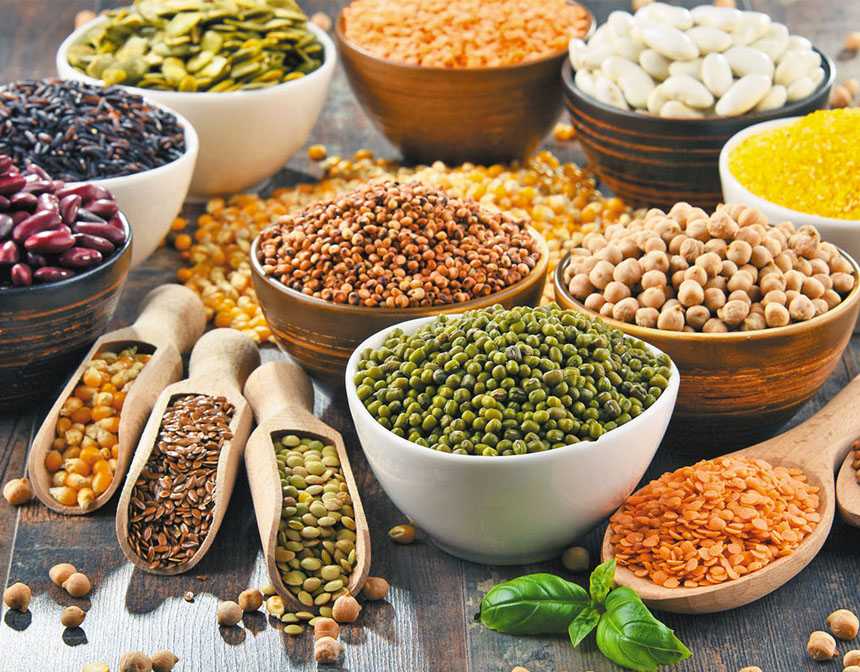 The legume family includes various species of Asian origin, including peas, beans, chickpeas, lentils, soybeans, but currently consumed and grown in many countries. They may generally be present in fresh or dried form; therefore, the protein and caloric content of legumes varies. Dried legumes are known to contain more protein than fresh ones.

If products such as beans, chickpeas or lentils are dried, there is no problem with freshness: they should be kept in cold water. For example, lentils should be kept for 6 hours and chickpeas for 18 hours.

To avoid unpleasant surprises when cooking legumes, there are some points to consider. First, you should know that during cooking, legumes almost double their weight. Remember this when you are deciding on the portions.

For dry legumes, soaking is important. Add plenty of water to a large saucepan (usually 1: 4), After waiting, rinse the legumes under running water, and strain. To prevent legumes from hardening, add salty water, but after cooking, it should be flavored with herbs (rosemary and sage) and black pepper. When the water begins to boil, calculate a cooking time between one and a half hours for french beans and 3 hours for chickpeas. After cooking, add salt and mix and allow to dry. Legumes are ready to use. Legumes, which are available at almost any time throughout the year, can be stored in packaged, transparent bags. If you are getting pre-made legumes, make sure you clean it throughly.

Let's have a look at a few beans together.

There are many types of legumes, and they can all become the key ingredient in any meal. The nutritious and tasty food family is versatile too. Every country has adopted one or several legumes in their daily menu.

These are the types of legumes and how to cook with them. There’s a legume for every recipe, and they’re essential in plant-based diets, so getting to know them pays off!

What Are The Different Types of Legumes?

Legumes are a family of plants that produce unique seeds, also known as legumes. Peanuts, soybeans, chickpeas and beans are just a few examples, but we enjoy several dozen types of legumes worldwide.

Legumes are prized for their flavor, but also their nutrition — they’re the best source of protein in the plant kingdom. Of course, they’re all healthy alternatives to meat, which has made the food category more popular than ever. These are the types of legumes.

10 Types of Legumes & How To Use Them

Learn about different types of legumes, from lentils to various types of beans, and how to cook with them!

Lentils are small, lens-shaped legumes that grow in pods. They’re a staple in India, where they become rich stews, soups, and curries. Still, lentils are immensely popular worldwide.

There are at least a dozen types of lentils, often of different colors and sizes, but they’re all cooked the same way, low and slow over a medium flame until tender. Then you can eat them as-is or blend them for a creamy gravy.

Yellow-green seeds that have different sizes. It is high in protein and carbohydrates. They do not require very long cooking times. It is used in soup, and vegetable dishes.

Contrary to common belief, peanuts are not nuts, but legumes. They’re native to South America, where they play a critical role in sweet and savory foods. This is one of the most common legumes, as people enjoy peanuts as snacks, in candy bars, as a creamy spread, and as a topping for savory dishes like Pad Thai.

Peanuts come in a crackly shell, and they’re covered with a nutritious seed coat. You’ll find peanuts whole or thoroughly stripped. Boil or roast them, eat them straight from the shell, or add peanut oil to your diet!

Soybeans are a staple in East Asia, where they’re consumed steamed or pan-fried in numerous recipes. Still, what’s most interesting about this legume is its versatility. People use soybeans to make soy milk, soy sauce, flour, soybean oil and tofu. There are dozens of uses for the prevalent legume.

It is very rich in protein and fat. Since it is consumed in various recipes, it is used in fresh sprouts, flour, bread, sauce, pasta, oil, milk and many other products. The latter is very useful in case of food intolerance. One of the by-products is soy cheese, a type of cheese made from soybeans.

Enjoy a soy ice cream, soy yogurt or treat yourself to a vegetarian burger patty made with mashed roasted soybeans. This is one of the most commonly consumed legumes worldwide, and many of your favorite food items are made with it.

Chickpeas, the round-shaped legume is high in protein, and its flavor is mild. Adding chickpeas to stews and soups is not uncommon, but the legume is also pureed to become hummus. Chickpea flour has its uses, too, including making falafel.

Other than that, chickpeas can be roasted and turned into delicious snacks, and they can play a role in salads, stews and curries. Interestingly, chickpeas preserved in sweet syrup are a popular dessert in the Philippines!

Green beans are a unique type of legume—they’re the unripe pods of various kinds of beans and peas and are consumed before the beans, tucked tightly inside the green pods, ripen and harden.

These unripe pea pods can be firm or tender. Generally, when talking about green beans, we talk about the varieties with a pod soft enough to be enjoyed whole.

Green beans can make their way into stews and casseroles; you can toss them with rice or puree them to make sauces. Green beans are also fantastic savory snacks.

Also known as broad beans, fava beans are amongst the most flavorful types of legumes. As the name suggests, this legume is large and broad, and although it was first cultivated somewhere around the Mediterranean Basin, they’re now consumed worldwide.

People prize fava beans for their earthy flavor. You can toast them or boil them, eat them whole or pureed. Few legumes have such an immense significance on all five continents. Nutrition-wise, fava beans are also unmatched; they are the legume with the highest protein-to-carbohydrate ratio.

There are over 40,000 types of beans globally, making them the most extensive legume. And although many of these types of beans are widely consumed, one of the most commercially available is the kidney bean. It can be purchased as dried and suitable for salads after you boil them. It lowers blood sugar and high blood pressure. It is good for anemia.

These red-hued beans are starchy, and they’re shaped like kidneys. The red kidney beans and the speckled kidney beans are the most common, and they’re often pressure cooked and served as-is or mashed. Beans are an essential source of proteins, mainly in Latin America. Needless to say, the meaty legume is incredibly nutritious.

Shell beans are widely used. It is also known as Roman beans. Unsaturated fatty acids are high. It is rich in protein. It protects heart health. It is antioxidant source.

Cannellini beans are kidney beans, also known as white beans. These are typical in Italy, mainly in Tuscany, but they’re widely consumed on the Indian subcontinent as well.

Split peas are dried, peeled, and split peas. It is more common than regular fresh peas as they have a longer shelf life. Of course, split peas are also more flavorful than fresh peas, so they can become rich soups and colorful purees.

Yellow split peas are a typical snack as well, but people use them to make pudding as well. Sweet and savory dishes rely on the flavorful legume worldwide, from the Caribbean to the Greek islands. And if you ever tried the famous Indian dal, chances are it was made with split peas and not lentils.

This medium-sized legume is consumed worldwide, and it’s easy to distinguish for its black specks. These black-eyed peas were domesticated in Africa, but they found themselves feeling at home in America as well. This type of legume is common in classic American dishes like the Hoppin’ John, but you can enjoy them like any other bean — in soups, salads, stews, and broths.

It grows in South America. It contains vitamins A and B, folic acid, calcium, phosphorus, copper, iron minerals. reduction. It is good for the heart and blood vessels. It is used in salads.

It's Italian beans. It is very easy to digest. It has a strong texture and strong taste. It is mainly dried and can be preserved for a long time. It requires long-term cooking.

Color varies from yellow to green. It is perfectly soft when boiled, and included in the recipes as salads or garnish. It is rich in fiber, minerals and vitamin A. You can find it fresh, canned or frozen.

Fresh navy bean is green, and the dry is white color. It is rich in vitamins and minerals. Mostly sold dried or canned.

It is a green round seed found in long and sharp beans. It can be found fresh, pre-cooked, frozen and canned. It is rich in vitamins and minerals, should be eaten immediately after cooking. Peas can be used in many different ways, and suitable for a wide range of dishes, from main courses to side dishes.

It grows in South America. It contains vitamins A and B, folic acid, calcium, phosphorus, copper, iron minerals. reduction. It is good for the heart and blood vessels. It is used in salads.

This is a stewed bean dish that is very popular in Turkey. It has been a favorite since the Ottoman era. If you are looking for a low budget dish that...

Soybeans are a type of pod that has become one of the most consumed foods in the world. They are extremely beneficial to human health and are also easy...

Split Pea Soup is a soup typically made with dried peas. It is a part of the cuisine for many cultures. It has a light flavor with its color, taste and...

It is a delicious appetizer that is identified with Middle Eastern cuisine. It is a nutrient rich in protein and contains natural antidepressants.Humus,...

One of the great appetizers of the Greek cuisine. Perhaps the most delicious form of bean is going to be on your table.

Boil the peas.Add all the ingredients to a blender and puree until smooth, about 30 seconds.