This Chinese Omelet Egg Foo Young recipe is made with delicious vegetables and proteins! Serve this Chinese-American dish with gravy sauce.

Egg Foo Young is a Chinese omelet. It's a deep-fried scrambled egg recipe filled with vegetables like carrots, peas, and bell peppers, and proteins like shrimp, pork, or tofu. It is served with a delicious sauce.

If you like to cook Chinese food, try this Egg Foo Young recipe. Serve this omelet with rice, perfect for breakfast, brunch, or lunch. 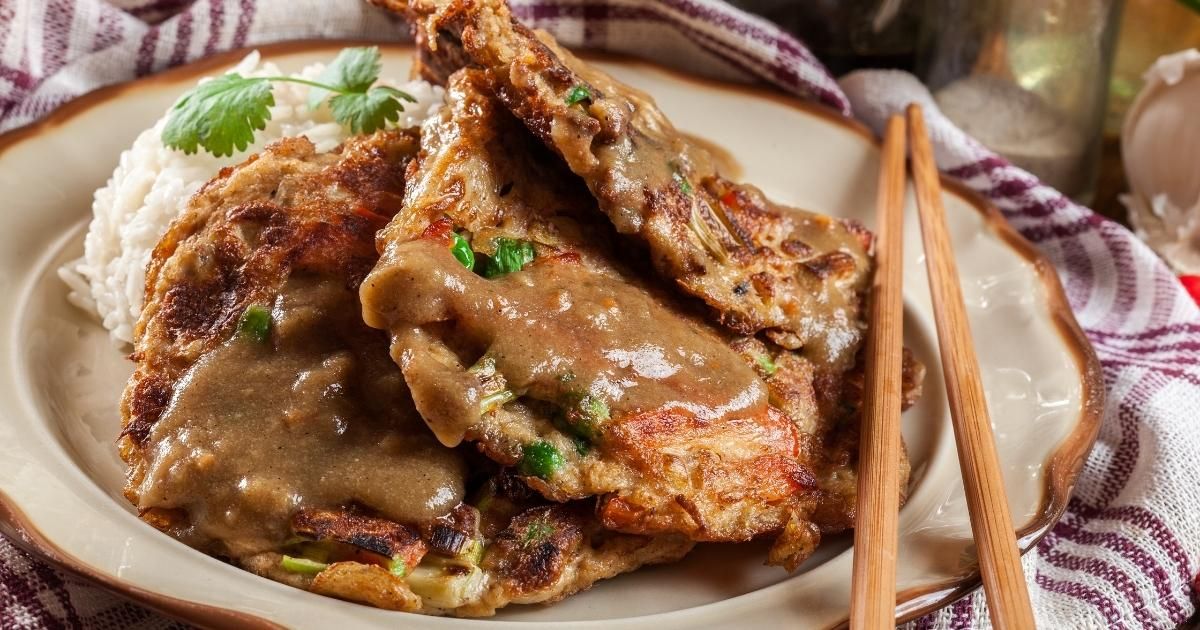 What Is Egg Foo Young?

Egg Foo Young or Egg Foo Yung is a Chinese omelet. The egg is mixed with vegetables and fried with some kind of protein, such as shrimp or chicken.

Essentially, it's a recipe created to use leftovers. You can use anything as a filling to make Egg Foo Young, just be sure to mix it well with the egg mixture.

What's The Difference Between Omelet and Egg Foo Young?

The main difference between Egg Foo Young and an omelet really is that when making egg foo young, the fillings are added to the egg mixture before it is put into the pan. In omelet making, the egg is added to the pan and cooked for a bit before any mixture is added.

What To Serve with Egg Foo Young?

You can serve Egg Foo Young as a main course or as a hot starter. You can pour the gravy sauce on it or serve it in a bowl as a dipping sauce.

Homemade Egg Foo Young also goes well with rice or steamed vegetables. Garnish with chopped spring onions and toasted sesame seeds before serving. You can also use these eggs as a filling ingredient for bun bread.

Here are our delicious recipes that you can serve with Egg Foo Young:

How To Store Egg Foo Young?

Egg Foo Young is best eaten fresh. However, you can store it in an airtight container in the refrigerator for up to 3 days. You can also freeze them and then defrost them in the microwave or on the stove with a lidded pan and some water.

In either case, when reheating the egg foo young, make sure that it’s steaming hot all the way through.

It is a delicious and tender meat dish that is consumed by Muslims especially during...

General Tso's chicken has been a staple in the Chinese culinary scene for centuries....

A popular Chinese Cuisine classic which is guaranteed to be on all restaurant menus...

Preheat the broiler. Lightly oil the broiler pan. Toss the carrots with 1 tablespoon...

Chicken is one of the most popular food of our time. It has great harmony when combined...

It is one of the most delicious of chicken. It leaves an unforgettable taste with...